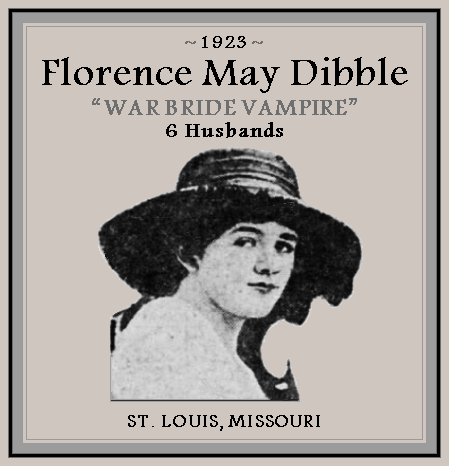 FULL TEXT: The world henceforth will be an Adamless Garden as far as Florence May Dibble, formerly of Binghamton is concerned.

Six times married, without the formality of divorce intervening, the pretty matron, now only 26, is in the county court house jail, awaiting sentence on charges growing out of developments in complications that have arisen because of her frequent trips to the altar.

Federal authorities had her arraigned before Judge Frank W. Cooper in Federal court this morning and she pleaded guilty to defrauding the government by taking a soldier’s wife allotment, assigned to Percy Adair of Deposit, to whom she was wedded in March 1918, while two other husbands, un-divorced were still alive. She was remanded to the county jail for sentence. Judge Cooper wishing more time to investigate her case.

The girl has restored $30 of the pension money she obtained and is ready to give back the remaining $160. Restitution, she says she hopes, will bring leniency in her case.

The girl’s matrimonial ventures are not an issue in this case and she believes no such issue will ever be raised when once the true facts are known.

The girl has been accused of marrying several soldiers and taking allotments from each, but this is untrue she says, and there is no evidence shown, so far, to indicate she took allotments from any but Adair.

Her matrimonial record in brief follows:

In 1911 at the age of 14 the girl, an orphan reared by her grandmother married Isaac Page in Elmira. She ran away from him the next day, was caught and placed in a House of Refuge. In 1914, aged 18, she married Willard Schrader. Two children, both boys, now 6 and 7, were born. In February, 1918, she says Schrader deserted her. She placed the children with relatives.

In March, 1918, she met Percy Adair on a train, went with him to Spartanburg, S. C., where they were married and where he signed an allotment over to her. After three weeks in Spartanburg she came north. In July, Paul Snaap led her to the altar in Binghamton. In December, Cornelius Regan wedded her. And in November, 1920, Samuel Bruce of Milwaukee married her in Detroit.

Late in 1918, Adair discovered his wife’s marrying habits. The government also learned of them. A search was started for her but it was not until January, 1923, that she was arrested in Pittsburgh.

Alone in her cell, the girl vows that if freedom ever comes to her, no man will ever again lead her to the altar.

“Bruce was the best of the lot, a good fellow in many ways, but I am through with all men.

“I hope no bigamy charge will ever be raised against me. I know that a jury of woman, or a jury of happily married men who know the world would exonerate if there was any such thought.

“I broke legal laws in order to keep moral ones. Without funds, stranded in every sense of the word. I was repeatedly called upon to make a choice.

“I don’t claim to have loved any of these six men. Only one love ever came into my life and the fellow died before we had a chance to be married. If he had lived, all this would be different. Page, my first husband, would have been married, and happy.

“If I had been crooked or immoral, I might have kept out of custody. One fellow put up a proposition to me some months ago and I rejected it. He knew my history. I have always thought he topped government men to my whereabouts. I was working in Pittsburgh when they located and arrested me.

“I have tried of all men. There is not a one of the men to whom I have been married of whom I am sufficiently fond to stll carry his name. I am and always be Florence May Dibble.

~ Only Takes One Allotment. ~

Adair’s allotment was the only once I received. Shrader went into the service but he forgot he ever had a wife and he told the enlistment people his mother was the only dedendent he had and she got his allotment. If any of the others went into serrvice, and I am told they did, it was after I left them.

“I want to give the government back the money I took from Adair’s allotment and I hope restitution will bring me forgiveness and freedom.

“I have money now, being in fairly comfortable circumstances for the first time in my life. My grandfather’s recent death resulted in $3,000 cash and a small farm for me. I want to go to that farm, work it as best I can and forget that any man ever existed.” 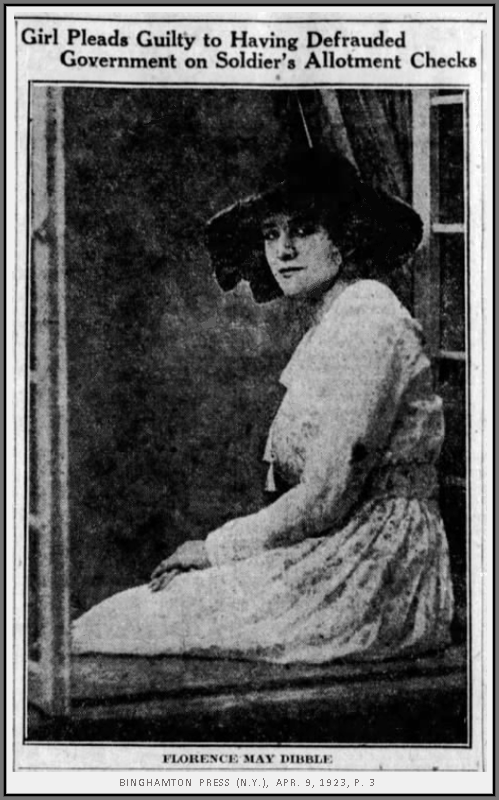 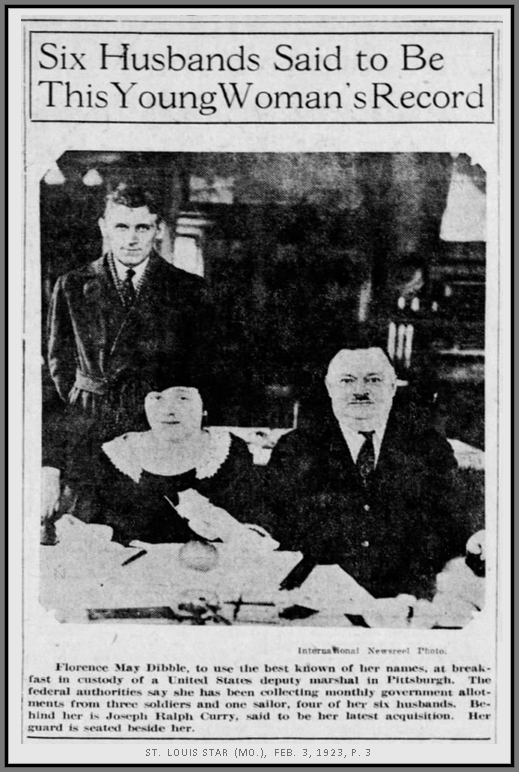 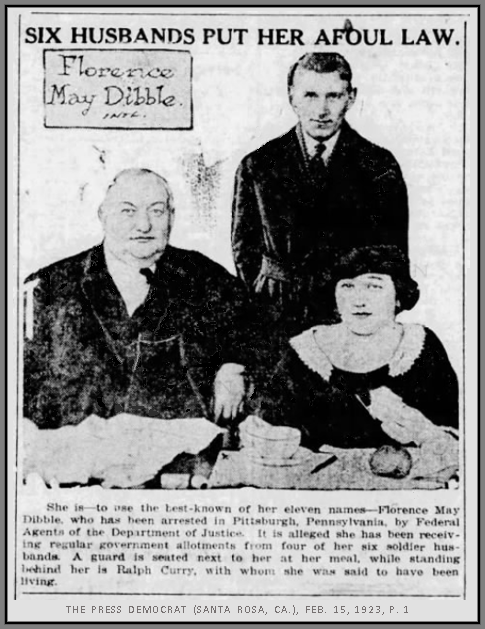 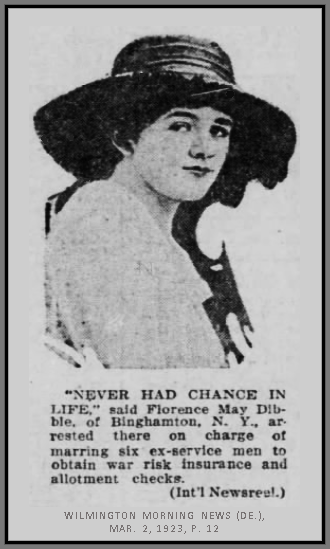