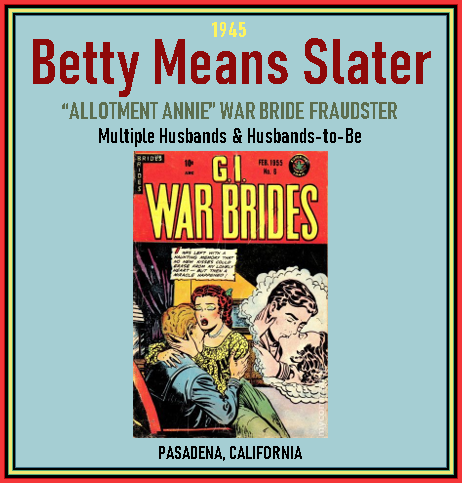 FULL TEXT: While police and FBI agents tried to unravel her apparently tangled marital situation, Mrs. Betty Means Slater, 23, of 2191 El Sereno Avenue, is being held in jail. She was arrested last night when a merchant informed police that he had cashed government allotments checks for Mrs. Slater and that at least two of them were made out to persons of different names.

A 19-year-old sailor with Mrs. Slater at the time of her arrest was turned over to naval shore patrol officers when he was found to be A.W.O.L. The sailor also admitted he and Mrs. Slater were to be married, police said. The woman is being held for investigation of bigamy and violation of Federal statutes regarding fraudulent receipt of allotment checks.

According to police, the woman married Robert E. Gorusch in 1940 and was divorced in 1942. Under her maiden name of Betty J. McKenzie, Mrs. Silver had in her possession a $30 allotment check for support of her 3-year-year old child by a former marriage, police declared. The woman also admitted, police said, that she received an $80 check from the allotment of her present soldier-husband, Eugene Roy Slater. This, according to police, would mean she was receiving two allotments for the one child.

The case is further complicated by a letter police said they found in her possession from another man asking that she divorce him. The woman denies any knowledge of this letter, police said.