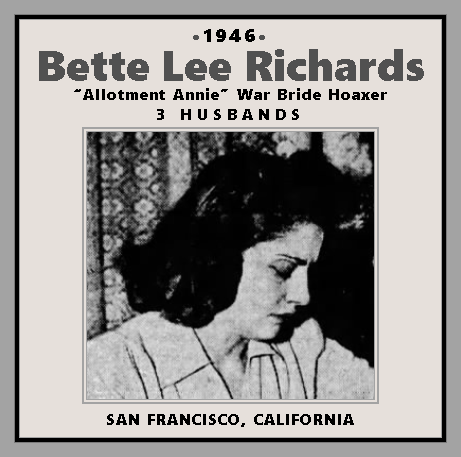 FULL TEXT: A three way matrimonial parlay with a Marine, a Coast Guardsman, and Navy sailor resulted yesterday in charges of fraud against Betty Lee Richards, 2.

Although she had three husbands, she failed to obtain a single divorce and was collecting Navy allotments from all three, claimed by the FBI.

Husband No. 1 was William Richards, Marine corporal, whom she married in August, 1942. (In discussing her dilemma, she said Richards filed divorce proceedings shortly after their marriage, and she thought the action was final.)

Husband No. 2 was Coast Guard Lt. Richard Hofmaster, whom she wed in April, 1944. (She maintained she filed annulment proceedings against Hofmaster, and assumed the marriage invalid when she wed husband No. 3.)

Husband No. 3 is former Navy man, one time Baker 1/c Robert L. Bowman. They were married in September, 1944, and have been living at 735 San Jose Avenue.

Specifically, the FBI said that while “married” to husband No. 2, the Coast Guard lieutenant, she received $3,000 in outright cash from him and his family. No charges were filed in connection with this, however.

“It sure is a mess,” sighed husband No. 3 – Bowman, the ex-sailor. “We want to see it through, pay back any money that’s owed, and try and forget the whole thing.

“We’ll get married again and start all over.” 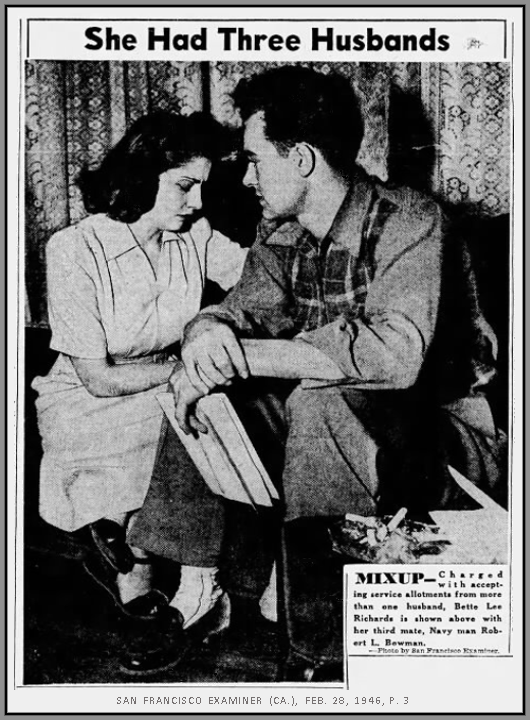