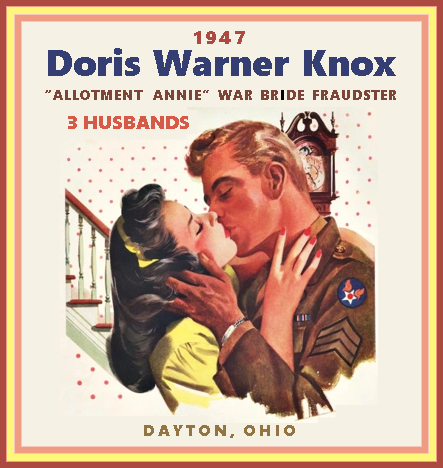 FULL TEXT: A 25-year-old former Dayton woman who “didn’t realize I had to divorce one husband before I married another” was given a year's probation in U. S. District Court Monday.

The government had charged her with receiving a $100 allotment check on May 1, 1945, as the wife of Daniel C. Moten, although she was not divorced from her first husband, Howard Knox.

Mrs. Knox, a night club entertainer, told newsmen she had married Knox in Georgia in 1938. After he entered the service in 1943, she began to receive allotment checks as his wife. In December of 1944, she said, she met and married Fred Rhine, a Seabee, on leave in Gaston, Ala.

One hour after the marriage, Rhine returned to his outfit in California, she recalled. She added she has not heard from him since.

Then in February of 1945, her story continued, she married Moten in Newman, Ga., and in May received a $100 allotment check for the months of February and March.

"I didn't know I was doing wrong," Mrs. Knox said. "I thought that it was all right to get married and then get a divorce from the previous husband later."

Mrs. Knox was arrested by-federal agents in Youngstown on June 5. She has been held in the Columbus city prison.