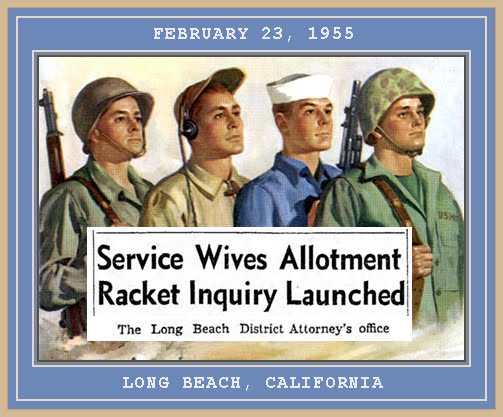 FULL TEXT: A probe into a GI marriage racket in Long Beach was launched Monday by the District Attorney’s office in an effort to crack down on service “brides” who collect government allotments under false pretences.

Superior Judge Paul Nourse touched off the investigation after he annulled two GI marriages in his court Monday.

In each case, the serviceman, discovered his “bride” had been legally married to someone else, but had been collecting his allotment while he was overseas.

“This is a good Long Beach racket.” Judge Nourse said from the bench. “Women get married to get an allotment. We get those cases every day. It’s got to stop.”

One of the alleged victims Monday was Navy man Earl E. McComb of the USS Manatee, who testified he married a girl he met here Jan. 20, 1954, and went overseas shortly thereafter.

Returning to Long Beach last September, the sailor said he found his wife had been previously married. He stopped her allotment but she had collected it for eight months.

McComb’s case and that of another serviceman involving the same situation were referred by Judge Nourse to the District Attorney’s office.

Dep. Dist. Atty. Lynn D. Compton and Lt. Thomas Slack, investigator, said they would check court files for other cases in which serviceman becomes aware of the invalidity of the marriage,” Compton said.

The probe will be conducted with an eye toward possible prosecutions for bigamy or obtaining money under false tenses she added.

Annulments were granted when the two men established their wives were legally married to other men.

“We get these cases every day,” said Judge Nourse. “Women are getting married just to get an allotment. It’s got to stop.”