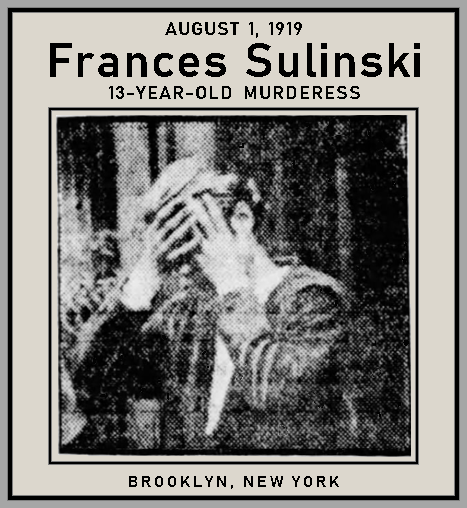 FULL TEXT: Frances Sulinski, the 13-year-old servant girl, arrested late Friday by Detective Francis A. Dougherty on suspicion of having poisoned Solomon Kramer, the 14-months-old child of Mr. and Mrs. Samuel Kramer of 580 Shefield ave., confessed today that she had deliberately murdered the child.

She did so, she told Detective Dougherty, to get revenge on Brandel Nusshaum, the 70-year-old nurse maid. She thought the happening would be laid at the door of the old nurse. She also admitted that she poured lysol into the elderly servant’s favorite teapot with the hope that the woman would drink it.

The girl, probably the youngest of her sex ever arraigned in the Children’s Court on a charge of destroying human life, was taken before justice Cornelius F. Collins this afternoon in the juvenile tribunal. She faced the Court with a few sobs but no tears.

She is tall and spare, greatly overgrown for her years. Her eyes are blue and honest-looking. Her hair is blonde and straggly. She has none of the marks that would indicate a degenerate type.

Justice Collins, seeing that the charge was homicide and in the first degree, announced that he would sit as a magistrate. He remanded the girl to the Children’s Society without bail and instructed Detective Dougherty to take the matter to the District Attorney. The only words the girl uttered were in answer to a question from Court as to her age.

Details or the poisoning of the little v stamp the girl as a juvenile I.u- eretia lloigia. Her murderous act s planned with devilish cunning and perpetrated with nicety.

She went to work for the Kramers a week ago last Wednesday. She had been slaying at her cousin’s following her departure from home. It developed today that she left home not because she was abused, as she told officers of the Children’s Society, but because she had been caught by her father. John Sulinski, a Park Department employe, stealing $20.

At the Kramers she began work at $1.80 a day. After a few days she nt to Mrs. Kramer and told her, Mrs. Kramer says, that she thought so much of the Kramer children, there were five of them, and liked the surrounding so much that she preferred to work for nothing.

“I asked her if she would work for board and lodging, and she said she would,” Mrs. Kramer said today. “She immediately seemed pleased with the proposition, and began the task.”

She attended school at No 173, and did her housework before and after school hours.

But quarrels between her and the the two they made “I wanted to get even with the nurse,” the girl told Detective Dougherty in her confession. “I knew that she was charged with the care of the children. I knew that the lysol was poison and the very day that Mr. Kramer warned me to be careful of it the thought entered my head.

“I waited my chance. Thursday afternoon Mrs Kramer went out into the yard to fix some clothes. A moment before she had been in the kitchen, where the nurse and I were, and had told us she was going to the market with some eggs. I thought she had gone. I went upstairs. The child. Solomon – oh, yes; I loved him – was asleep.

“I waked him up. I took down the bottle of lysol. I said to the little fellow. “Here! Take some cough medicine.’ Then I poured it in his mouth.

“When he screamed I became frightened am! knew I had done wrong. I ran out of the room. But as I ran out I met Mrs. Kramer who had heard the child cry. She ran in and returned a moment later declaring the child had been poisoned.

“It was my idea that it would appear that the boy got the poison by mistake. Then the nurse would have been blamed. When I saw that this might not work I poured some of the lysol in the teapot. You know they have a habit in that house of making tea and letting it stand and then adding hot water to the strong tea.”

The confession was made today at the Children’s Society, where she had completely fooled officials since her entry. The evidence of the teapot broke down her story. Detective Dougherty interviewed her and she repeated the old story tending to show the probability of an accident.

“How about this. Why did you put the stug in the teapot. Smell it!” said Dougherty, pushing the pot under her nose.

Then she broke down and confessed.

There are four other Kramer children, Sam, 7; Louis, 6; Isidor, 5, and Rebecca, 4. Their father is a neckwear presser. They live in an old farmhouse and they have a small income additional to his wage through a flock of 90 chickens they keep.

John Sulinski, father of the girl, was in court. He said:

“I cannot understand it.” The girl was always a good girl. She loved her three brothers and was verv good to Peter, four years old. my baby.”

“Did she leave you because you beat her”“ he was asked.

“I did beat her when she stole. When it was stolen I accused her. She admitted it. I punished her and she ran away I had been looking for her when I learned of her arrest “

“Was she always a rational child?”

“Yes And only recently she developed the trait of stealing.” 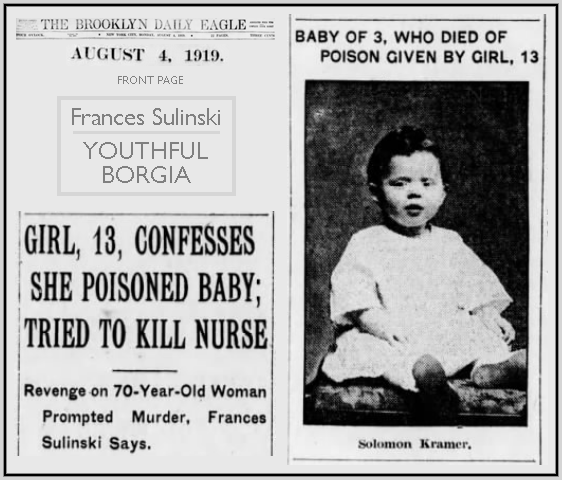 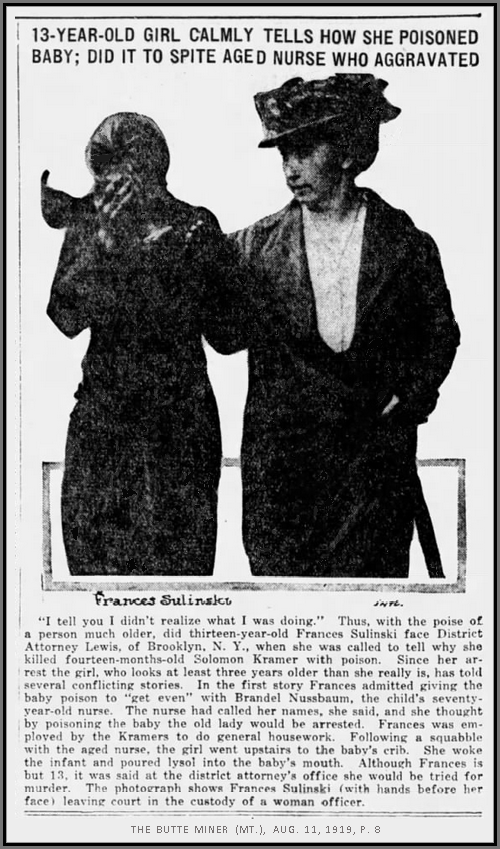 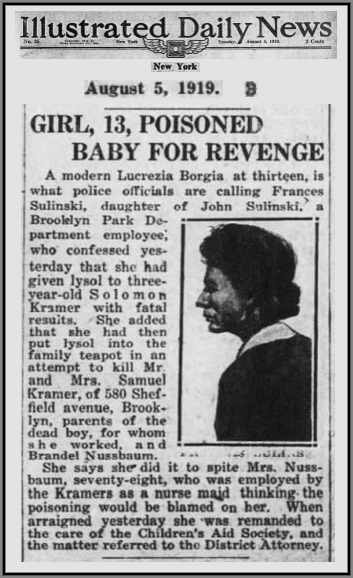 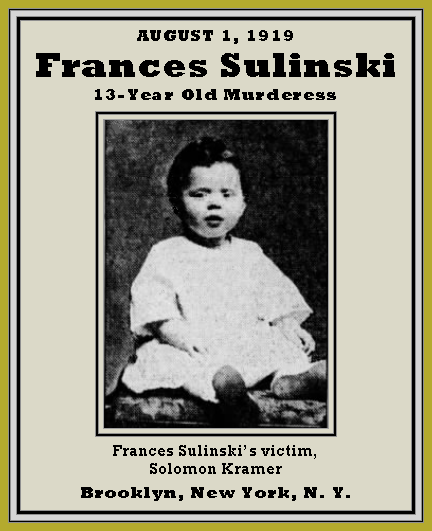