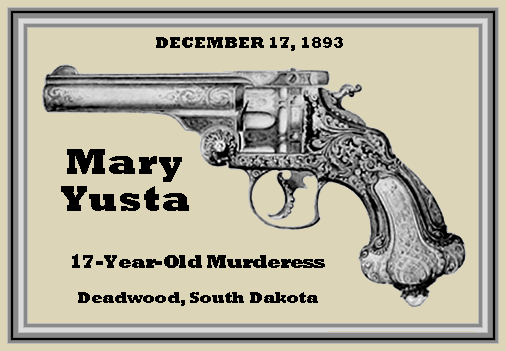 FULL TEXT: It is learned that Eustie Trevis, the young girl who shot and killed the McDermot [sic] girl at Deadwood last Sunday night in a quarrel over the affections of a gambler, is the daughter of a well-known and wealthy Bohemian farmer living in Saline county. Her name is Mary Yusta. Three years ago she lived with her parents on a farm about half way between Wilber and Crete and was looked upon as a good and pretty girl. But her character belied her looks, for she left home under circumstances which were, to say the least, painful to her doting parents. She was brought to Lincoln by a young man well known in this city and maintained for a time. The young man finally became tired of her and cast her off. Naturally she drifted farther along in a life of shame and finally became an inmate of Lydia Stewart’s place. Afterwards she went to Georgia Wade's place, and in both houses she was a general favorite. Leaving Lincoln for a time she went to the Hills, and after a while returned. She returned to Deadwood some time since. She went by the name of Birdie Bailey here.

FULL TEXT: Deadwood, S. D., March 7. – Mary Yusta, who murdered Maggie McDermott [sic] December 17 while in a jealous rage was found guilty of manslaughter in the second degree. The maximum penalty is four years’ imprisonment. The prisoner is 17 years of age and the daughter of a farmer near Lincoln, Neb.