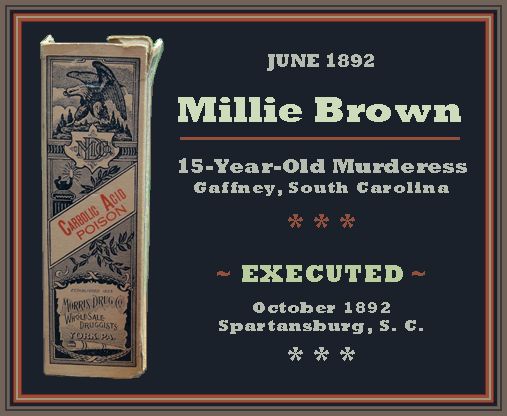 FULL TEXT: News has reached Spartansburg, S. C, of a most diabolical crime committed at Gaffney, that county. W. C. Carpenter’s little girl, 10 years old, was given carbolic acid by her nurse, a negro girl named Millie Brown. The girl was vexed with Mrs. Carpenter and took this means of venting her spleen. The unfortunate child died shortly after, after the most terrible suffering. The girl was taken to Spartansburg and committed to jail. She confessed her guilt.

FULL TEXT: Columbus, S. C., Sept. 6. – Governor Tillman to-day, in order to consider the application for pardon, replied Millie Brown, a fourteen-year-old negro girl until October 7. The girl brutally murdered a little child in Spartansburg county and was sentenced to be hanged next Friday [Sep. 9]. If the sentence is carried out she will be the only girl and the only woman for years that has been executed in this State.

FULL TEXT: Millie Brown, a fifteen-year-old colored girl, was executed at Sprtansburg, S. C., for the murder of W. C. Carpenter’s infant at Gaffney City in June last. On the same scaffold a negro male murderer was hanged at the same time.