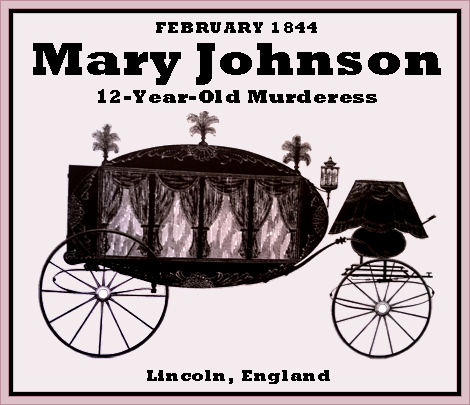 FULL TEXT: On Monday evening last was committed to Lincoln Castle for trial at the ensuing assises, charged with the wilful murder of her two little brothers (on the mother’s side), Mary Johnson, a girl not yet 13 years of age. The inquest was held by Mr. Mastin, coroner, at Benington, near Boston, the place where the parties in question reside, and it has proved one of the most painful and intricate investigations which have occurred here for a great many years. The prisoner’s improbable story is as follows — She went to Mr. Overton’s shop, where the post-office is kept, to inquire for a letter; there not being one, and other people being in the shop at the time, she went out again, and in about ten minutes returned, and asked for a pennyworth of arsenic, which after a deal of hesitation she obtained.

On the same night, when partaking of their meal, the two children were poisoned, and died early the next morning within two hours of each other — William, the younger, having expired first. On the night in question, after their meal was over, Fair (the father) and his housekeeper went to a ranting chapel, held in an adjoining parish, and upon their return home they found the two children at a neighbour’s house, under the same roof, and labouring under all the alarming symptoms of retching, purging, and vomiting, consequent upon poisoning by arsenic, which continued with but little intermission until they died. The father fetched Mr. R. Cummack, jun., surgeon, but upon his arrival William expired.

The housekeeper underwent a very severe and trying cross-examination by the coroner, but nothing could be elicited from her or the father to criminate any one but the unfortunate prisoner; and upon the coroner’s address to her upon the verdict, and the painful duty which devolved on him in sending one so young in years to prison and to trial, she appeared to be the only one in an unusually crowded court who remained unmoved, indifferent, and mute. A report was prevalent on Tuesday night that the youthful murderess had made a confession to the Rev. Mr. Ritcher, the chaplain, which implicates other parties.