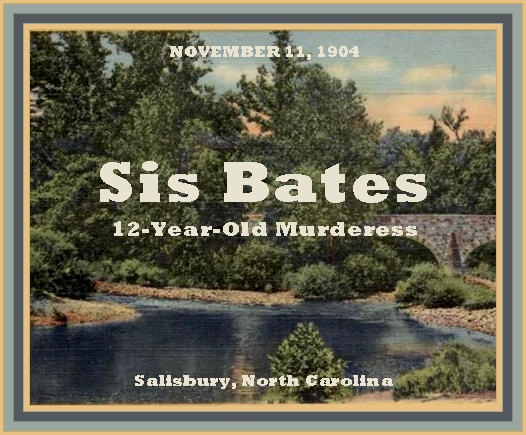 “Sis” is the nickname of the Bates girl but some sources give the name as "May," others "Martha."

FULL TEXT: Salisbury, N. C., November 23. – In Rowan Superior Court yesterday the grand jury returned a true bill for murder against May Bates, colored, of this city, who is charged with pushing another young colored girl into a creek and drowning her about ten days ago. The Bates girl is only about twelve years old, but will be tried for her life, the charge being murder. She is perhaps one of the youngest criminals ever tried in the State for a capital offense.

FULL TEXT: Last Thursday evening the dead body of Blanche Christian, a blind negro girl about 12 years old, was found in a creek near Salisbury. The body was nude when found. The blind child was last seen in company with “Sis” Bates, another colored girl, and after that “Sis” Bates was seen with some of the dead girl’s clothes in her possession. The Bates girl has been arrested. It is believed she killed her blind companion.

FULL TEXT: Martha Bates has been lodged in Rowan county jail, N. C., charged with the murder of Blanche Christian, a blind girl, whose body was found in Town creek, near the Salisbury waterworks. The dead girl’s were found hidden in the Bates home. It is said that jealousy caused Martha to commit the murder. The women had been boon companions for years. Martha Bates seemed to be more of a sister than a friend, and their companionship had only ceased lately when Martha’s lover had manifested a deep admiration for the blind girl. Martha had accused her of stealing her lover from her. A few mornings ago the blind girl was missing. Martha could not be found. She had been a short time before search for the missing blind was instituted. Later in the day Blanche Christian’s body was found.  Martha evaded the officers for two days before she was captured. She will be tried for her life at the next term of the Criminal Court.