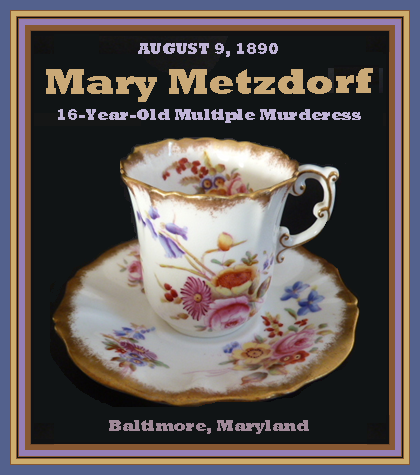 FULL TEXT: Baltimore, August 10. – Mary Metzdorf confessed this morning to having poisoned Miss Louise Broadwaters, her little brother James, and her mother, Catharine. She said she put arsenic in the coffee “just for fun.” Though not quite 17 years old, she bears herself like a hardened criminal. Miss Broadwaters died almost immediately after drinking the coffee, and James, her 6-year-old brother, expired last night. Mrs. Broadwaters, the third victim, is still in a critical condition. It is now probable that she will also died.

The coroner’s jury this morning came to the conclusion that the girl was guilty, though according to Maryland law her confession cannot be accepted as evidence. Aside from this, however, the evidence against her is conclusive and conviction almost certain.

FULL TEXT: Washington, Oct. 20. – Mary Metzdorf, aged 17, who killed her brother James, and Louis Broad waters, by putting poison in the breakfast coffee, was arraigned in court to-day. While the clerk read the indictment the prisoner sat sobbing with her head resting in the palms of her hands. When he finished reading the clerk asked if she was guilty or not guilty, and to the surprise of all she said:

For a time silence reigned, broken only by the sobs of the girl. “Do you know,” said Judge Stewart, looking up somewhat amazed, “the enormity of the crime with which you are charged, and do you realize the punishment attached?”

“No,” she replied. “I do not.” “Then you had better withdraw your plea of guilty and enter one of not guilty.

But Mary would not withdraw it, saying that she would be telling a lie if she said otherwise. Her sobbing increased, and all efforts to get her to withdraw the plea were fruitless. Judge Stewart held a consultation with Deputy State’s Attorney Campbell, and then said he would accept the plea of guilty and suspend sentence. When Mary was arrested and told what she had done she laughed heartily and said she had done it for fun. There was no cause ever developed for the offense. Her stepmother, Mrs. Metzdorf, who had partaken of the poisoned coffee but recovered, had always, so far as could be learned, been kind to the girl. Mary had been rather wayward, and had at one time been sent to the House of the Good Shepherd. At the time the poisoning was done she was employed in a wholesale drug store, where she obtained the poison.

FULL TEXT: Baltimore, April 17. – Mary Metzdorf, the youthful murderess who a few days ago was convicted of murder in the second degree for poisoning her little brother and Miss Louise Bradwaters, was sentenced by Judge Wright to fourteen years imprisonment.

In passing sentence the judge said he could not be influenced by the jury’s recommendation for money, certain disclosures since the trial having caused him to believe the girl should have received the extreme penalty for murder. 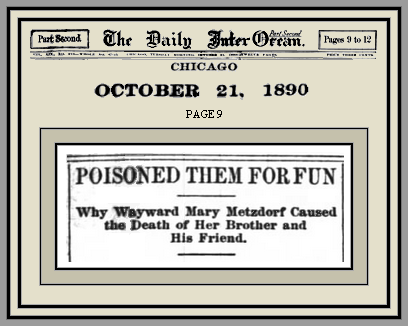