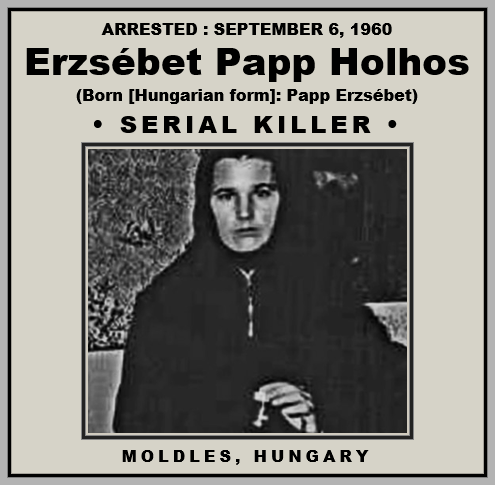 Erzsébet Papp, Mrs. János Holhós (Penészlek, Jan. 28, 1935 - Miskolc, Jan. 23, 1962) Hungarian serial killer, the "nicotine killer,” who was executed for her crimes: four murders. She was married twice and had four daughters. A child by her second husband died at the age of three months during the period of her murders, and might itself have been murdered.

The case is infamous for the continuous incompetence of police investigators, who botched the investigation from the beginning, even with the exceedingly suspicious death of a 5-year-old girl.

The method of murder was poisoning commercial nicotine plant spray, which contained a lethal, concentrated toxins, which she added to brandy.

Erzsébet Papp was born in 1935 as the daughter of János Papp and Julianna Krivács. He had high intelligence at the time, primarily according to documents related to his lawsuit, but his moral sense was underdeveloped.

She committed her first murder as preparation for killing her first husband, István Rostár. This and - her subsequent murders – were not committed due to any serious motivating reason he simply used poisoning to assuage resentment over petty matters. Before she was murdered her husband, experimented with the dosage. She killed a dog and a neighbor’s five-year-old girl (Helena Tarnóczi) by dissolving tobacco leaves and putting the extraction in a drink. A large dose of highly concentrated nicotine killed the little girl immediately, but her death was classified as a natural death, so there was no investigation.

Erzsébet poured the nicotine concentrate into a 2 liter brandy bottle and hid it under a corner table. Unsure that the poison would be enough to kill her husband, she decided to give it a try first with Ilona Tarnóczi, 5, who lived next door and often came to play with Erzsebet’s 2-year-old daughter, Irén. She gave the child wine, then poured nicotine into a glass and gave it to the little girl. The child took a sip, then became ill, then staggered out onto the street, where she finally collapsed and died.

The medical examination of the child was botched, as was the police investigation – a pattern that was to be repeated three more times concerning three more murders. The autopsy stated the cause of death as suffocation, postulating that, while vomiting, a slimy mash of food had blocked the little girl's larynx, causing her to asphyxiate.

Erzsébet’s neighbor and friend, Mrs. József Fürtös, whose sin was so much that she had offended by gossiping was the next to die. Pretended to reconcile, brought brandy. She died quickly. Erzsébet was interrogated by police she told them she had arrived to find her friend ill. The empty brandy bottle was on the table, unnoticed by investigators. An autopsy showed the woman was four months pregnant.

An investigation was not started on the suspicion of murder, but on suspicion of attempted self-inflicted abortion. The coroner, with reliable ineptitude, classified the death as suicide.

Erzsabet’s first husband, István Rostár, was an alcoholic who had verbally abused her several times while drunk. It was he was the final target of her preparatory homicidal activities. But the woman was quite the empiricist. She tested the poison on increasingly large victims: first a dog, second a small child and finally on an adult woman. She had already gotten away with two murders, so her confidence in escaping punishment was high. She was now ready for divorce-by-murder.

When the couple went for dinner at the Hunting Horn Restaurant on August 23, 1957, she had her brandy bottle with her. She spiked her husband’s drink; he died within minutes. The medical examiner classified the cause of death as alcoholism. A few months later Erzsabet gave birth to a child by the murdered husband which lived only three months.

Erzsabet remarried. In 1959, she wed János Holhos in Penészleken and moved to the village. Not long after, Erzsabet quarreled with her new husband’s sister, Mrs. Ferenc Juhos, and killed her with the standard nicotine coctail. Even then, police were not suspicious, yet the poisoner had made a serious error: she redeemed for deposit the brandy bottle in which she had kept her poison. Because the bottle was re-cycled and had not been sufficient cleaned, two people were to receive severe poisoning from the residue. Authorities examined the bottle, and found twice the lethal dose of nicotine contained inside. They identified the person who had redeemed the bottle. because there were several mysterious deaths in Erzsabet’s circle, they initiated an investigation. The bodies of the little girl and husband were exhumed.

Erzsabet was arrested September 6, 1960. Although Erzsabet denied guilt throughout the process, she was sentenced to death in 1961 and on January 23, 1962, executed by hanging.

Early 1958 –gave birth to her child from her deceased husband, who also died under unclear circumstances at the age of 3 months; moved from the village of Pereces to Moldles.

1959 – Ferenc Ónodi, buys brandy in recycled bottle and is made ill.

FULL TEXT: Budapest – Mrs. Janos Holhos; 27; of Pereces, North Hungary; has been executed for murdering four people as an experiment before he attended to dispose of her husband, a newspaper reported today.

Mrs. Holhos bought some poison but wasn’t sure if it was potent enough to kill her husband.

So she gave some to the five-year-old daughter of a neighbour. The child died.

Encouraged, but not wholly satisfied Mrs. Holhos fed it next to Mrs. Jozsef Furtos, against whom she bore a grudge.

Before she could poison her husband, however, Mrs. Holhos was arrested. 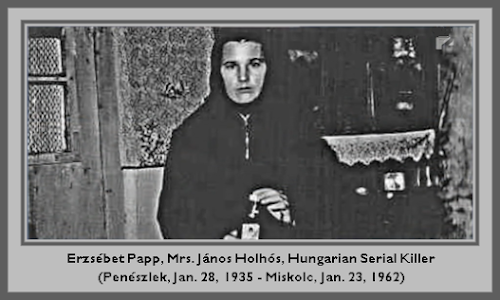