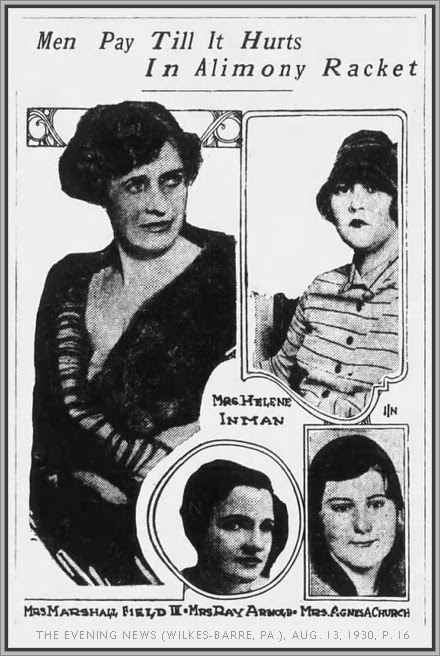 FULL TEXT: New York, Aug 15 — All hail America, the land of alimony, and the home of the gold-digger!

The spectacle of our harassed millionaires paying out staggering ransoms to free themselves of the chains of matrimony is becoming almost commonplace.

“What price freedom?” is the battle cry in today’s divorce courts, and justice’s answer is a thundering “Plenty! Give until you wince!”

There is the current sensation of Mrs. Marshall Field III. Mrs. Field, wife of the scion of one of America’s wealthiest families, was recently awarded exactly $1,000,000 a year in alimony.

Field can well afford to pay this enormous annuity. He is reputed to be worth $150,000,000. Shortly after the Reno decree was signed young Field planned to sail for London to marry Mrs. Dudley Coats, pretty friend of the Prince of Wales.

And Mrs. Field may become the bride of George K. Cherrie, the middle-aged explorer who accompanied the late ex-President Roosevelt on his famous River of Doubt expedition in South America.

Some months ago Mrs Linda W. Woodworth secured a divorce from her husband Chauncey V. Woodworth the perfumer of New York and Palm Beach. Although the allowance granted her cannot be compared with the kingly sum given Mrs. Field — it is no pittance. Under the terms of the divorce, Mrs. Woodward receives $21,000 a year or $1,750 per month. Many bank presidents are paid less.

Before Mrs. Rev H. Arnold married her millionaire investment broker-husband, she was a candy store clerk After over twenty years of matrimony, they separated Mrs. Arnold was given $40,000 annual allowance. Later she brought suit for divorce. After one of the most bitterly-fought legal battles in the annals of New York State courts, it was announced that Mr. Arnold would make a "just financial settlement” upon his wife.

Does a woman already receiving $40,000 a year alimony need a “just financial settlement?” It sounds a bit excessive.

Another Reno divorcee, whose future was rather well provided for by the judge who split the nuptial bonds is Mrs. Walter P. Inman who was granted an allowance of $15,000 a year.

Theatrical stars were formerly branded as alimony-diggers, but from the number of tranquil marriages between stage folk and millionaires it might be said that conditions are changing as far as they are concerned.

Constance Bennett is an outstanding exception. A year or so ago this beautiful screen actress obtained a divorce from Phil Plant, Broadway playboy, in Paris.

Young Plant is said to have turned over a cool million dollars to his wife when their matrimonial bark was wrecked on the rocks of temperament.