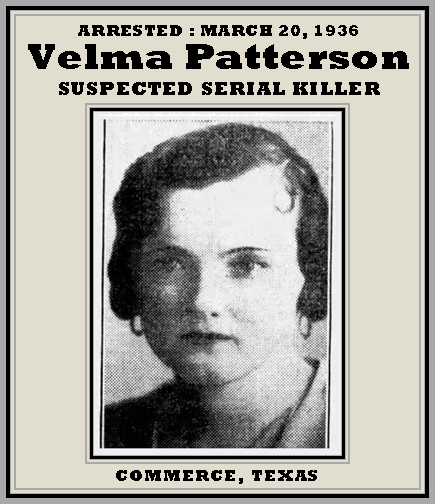 FULL TEXT (Article 1 of 4): Greenville, Texas. – Mrs. Velma Patterson, 34, of Commerce, was charged with murder Friday in the death of her 11-year-old daughter, Billie Fae McCausland.

The Hunt county grand jury returned the indictment Friday after Dr. Landon C. Moore, Dallas chemist, reported to District Attorney Henry Pharr that more than a lethal quantity of a poison was found in the child’s viscera.

Billie Fae’s body was exhumed from the little Pleasant Grove cemetery near Commerce Monday and the organs sent to Dallas on a magistrate’s orders and upon recommendation of a grand jury.

The indictment climaxed several days of investigation of the child’s death which occurred last January 7 at Commerce after a three-day illness. At that time, death was attributed to intestinal influenza.

Mrs. Patterson has been held in the Hunt county jail here since the investigation started. Deputy Sheriff V. L. Delaney said Friday afternoon that a search of the jail cell where she is confined had revealed a bottle of poison, a razor blade, and several letters in which she gave instructions for disposition of her body in the event of death, and also instructions for the care of a 15-year-old son.

The child’s body was exhumed from the quiet rural cemetery near commerce before a group of county officials headed by Pharr and Sheriff D. M. Newton, who brought the viscera to Dallas for examination. 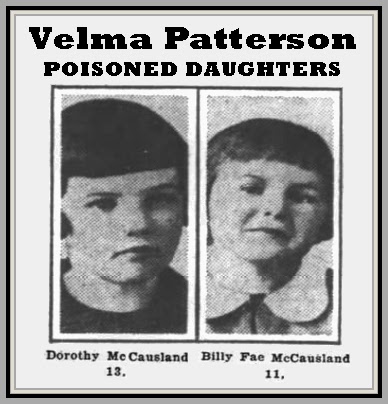 FULL TEXT (Article 2 of 4): Greenville, April 30: — The latest love affair of Mrs. Velma Patterson, already hinted as a possible motive for the alleged poisoning of her little daughter, Dorothy, was mentioned again today as the state closed its murder case against the thrice-married brunette.

The prosecution wound up its case at 11.10 a. m. and Judge Charles Berry recessed court until afternoon, when the defense will begin its efforts to break down the circumstantial evidence presented against the woman.

In closing testimony, Fred Patterson of Commerce, brother of Mrs. Patterson’s third husband, Bill, said that after ‘the death of Dorothy McCasland, 12, Mrs. Patterson told him she was in love with Jimmy Wallace, Lone Oak cattleman.

Fred Patterson quoted the woman as saying she was “thinking of marrying him (Wallace).

“I wonder what my family would think about it?” the witness said Mrs. Patterson asked him.

Annie Cooper, maid in the Patterson home at Commerce, previously had revealed that Mrs. Patterson was “deeply in love” with Wallace and had said she “would marry him if it wasn’t for the children.”

At that time her two children; Dorothy and Billie Fae McCasland, were living. They died early this year and the state claims poison administered by the mother was responsible Fred Patterson said he visited his sister-in-law’s home several times from Jan. 4 to 17 and saw Wallace there “frequently; often before they ate breakfast.”

Bill Patterson, the woman’s third husband, died the latter part of last year. Previously she had married and divorced W. W. McCasland, the father of Dorothy and Billie Fae, and Bill Kelly.

McCasland told today how Billie Fae, who died last Jan. 7, struggled for breath and. In convulsions, begged him to take her where she could get fresh air. He said she died in his arms while he was holding her In his arms, after carrying her to a back porch.

“She died before I could get her back to the bedroom,” he testified.

“I went to Mrs. Patterson’s Sunday, Jan. 5, to see the children and Billle Fae was sick. She asked me never to leave her. She was cramping, begging for water and asking for a doctor.

“The next day I left to sell a load of wood and Mrs. Patterson asked me to stop In town and bring her groceries^ and a poison to kill rats. I returned and never stopped the motor truck, left the articles and went on.

“The truck bogged down and I had to turn back. When I returned to the Pattersons, Billie Fae was terribly sick and died three hours later.”

Over defense protests, Judge Berry yesterday permitted the admission of testimony concerning Billie Fae’s death. Mrs. Patterson is on trial for the death of Dorothy, but also is under indictment for murder, In the death of Billie Fae, also allegedly a poison victim.

The defense attempted to get McCasland to admit he was drunk the day before Dorothy died and the day she was burled, but he denied being intoxicated. He also denied giving to Annie Cooper, maid in the Patterson home then, part of a bottle of whisky.

“I saw no medicine on the place but Mrs. Patterson told me she had given medicine and would continued to do so,” Mrs. Mattingly said.

The practical nurse said she left the next morning (Feb. 15) and didn’t return until the child died; then to “sit up with the corpse.”

Justice of the Peace J. A. wyatt of Hopkins county testified concerning entering an order in his inquest book for exhumation of the body of Billie Fae March 16.

The last witness before the state rested was Mrs. Fred Patterson, who testified:

“Velma told me she was crazy about Jimmy Wallace and they were going to get married if they could.”

Defense Attorney Harris didn’t reveal which witnesses ho would call first. It was considered likely Mrs. Patterson would testify near the end of the defense case.

Through it all Mrs. Patterson sat quietly, her face as expressionless as it had been all through presentation of the state’s case, except when her former maid, Annie Cooper, had created a sensation by revealing the defendant was in love with Jimmie Wallace, a cattleman, and allegedly said she “would marry him. if it wasn’t for the children.”

Then, as her purported love affair was unfolded in the words of the maid, Mrs. Patterson leaned forward, listening intently to every word.

FULL TEXT (Article 3 of 4): Greenville, Texas, May 3. – Mrs. Velma Patterson, 34-year-old brunettw widow, was acquitted by a district court jury today on a charge that she had killed her daughter, Dorothy MacCasland, 12, by poisoning. Mrs. Patterson, who is also charged with murder in the death of another daughter, Billie Fae McCausland, shouted with joy as the jury verdict was announced.

Her mother, Mrs. L. W. Williams, who was at her side, also was overcome with happiness. Mrs. Patterson ran to the jury box and shook hands with the jurors after the verdict was returned.

The jury of twelve farmers had deliberated since 4:55 p. m. yesterday. The verdict was brought in at 3 p. m.

Mrs. Patterson was returned to her cell in the Hunt county jail after receiving congratulations of friends and relatives. She was smiling and speaking animatedly in sharp contrast to her downcast demeanor of yesterday when District Attorney Henry Pharr wound up his arguments before the jury by demanding the death penalty. At that time she broke down completely and sobbed audibly.

Pharr was out of the city and there was no indication from the state as to whether the other charge against Mrs. Patterson would be pressed. Her local attorney, H. L. Carpenter, expressed the opinion that it would not, but was not ready to say what efforts would be made to release her from jail pending a decision. Mrs. Patterson said she would insist that her attorneys attempt to obtain her release on bond tomorrow. She was confident she would be freed.

“I will insist that my attorneys make every effort to obtain my release on bond tomorrow,” she said. “When I get out I will take my son (Junior McCasland) and go to the home of my sister, Mrs. Clara Purcelle, in El Paso for a long rest.”

Mrs. Patterson bitterly referred to witnesses who testified against her.

“The jury gave me acquittal but it didn’t give me back what I wanted most – that’s my babies. I loved them and lived for them. I wanted to rear them and make something of them.”

The jury, it was reported, stood 7 to 5 for acquittal on three ballots and returned its verdict on the fourth.

Mrs. Patterson has been in jail here since the bodies of the two children, who died early this year, were disinterred from the quiet little Pleasant Grove cemetery near Commerce last month. Death certificates of both Billie Fae and Dorothy stated that they had died of intestinal influenza, but the state contended that poison had been fatal to both. To support this claim, Dr. Landon G. Moore of Dallas testified as a state witness that he had found poison in the viscera of both children. He examined the viscera after the bodies were exhumed on recommendation of the grand jury.

The defense countered with withesses who testified that deep devotion existed between the mother and the daughter she was accused of poisoning. Mrs. Williams testified that under Mrs. Patterson’s encouragement the child professed religion last summer, joined the church and attended Sunday school. Mrs. Joe Stone, Commerce beauty shop operator, said Mrs. Patterson’s treatment of Dorothy was that of “devotion and outstanding love.” Several other witnesses declared that the mother was kind and affectionate toward the child.

The state also had offered testimony that the comely, thrice-married Mrs. Patterson was in love with a cattleman and wanted to marry him “if it wasn’t for the children.” The defense answered that the mother loved her children and had cried “oh, I wish it had been me” when Dorothy died.”

FULL TEXT (Article 4 of 4): Greenville, Texas, Nov. 18 – Illness of the principal state witness caused postponement today of the second trial of Mrs. Velma Patterson. Attractive widow of Commerce, Texas, who is accused of poisoning her two small daughters so that they would not interfere with her proposed marriage.

Mrs. Patterson was scheduled to go on trial today on charges of giving arsenic to her 11-year-old daughter, Billie Fae McCasland. She acquitted May 3 on charges in connection until next term of court when Dr. Landon C. Moore, Dallas chemist who examined Billie Fae’s body, was sick and unable to come to Greenville.

NOTE: No reports have been discovered of the second trial, for the murder of Billie Fae. Presumably the prosecution quit the case. No charges were brought for the death of her husband. Bill Patterson, and no reports of an exhumation of his remains have been located as of this writing. 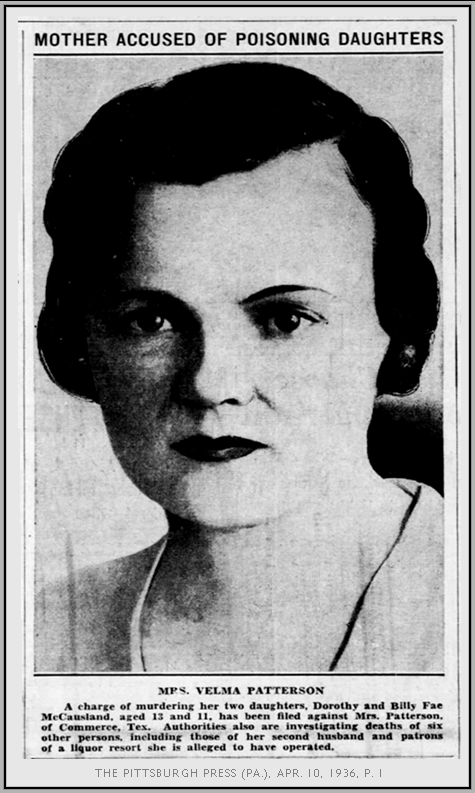 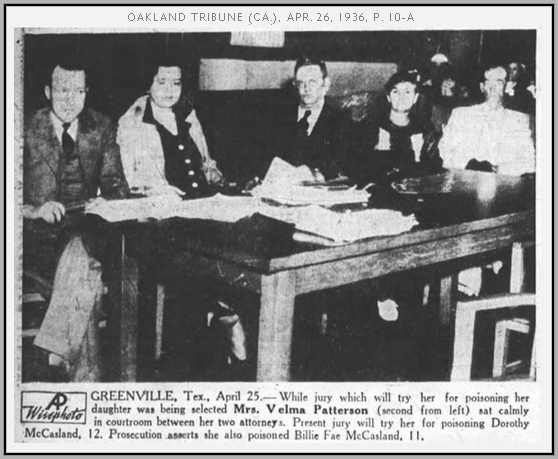 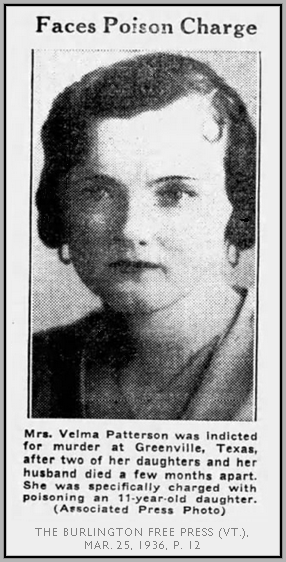 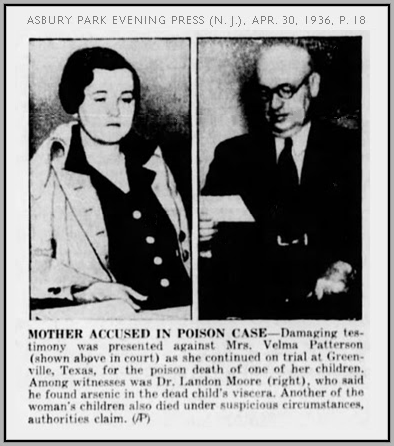