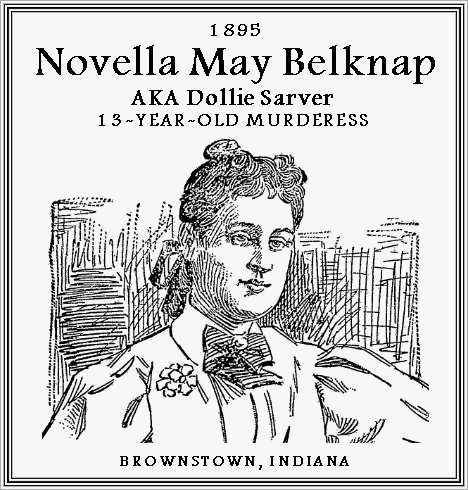 FULL TEXT: Little Novella May Belknap, or Dollie Sarver; as she is perhaps better known, has been taken to the Indiana Reform School For Females, there to remain until she is 21 years old; Dollie is the child murderess whose crime, that of poisoning her stepfather, Fleming Sarver, at Brownstown, Ind., some time ago, startled the world. Dollie is now 13 years old. Six years ago she was adopted by Sarver and his wife, a childless, well to do couple. Their own only child had just died, and having nobody to inherit their property they adopted the pretty child with the de­termination to give her a good home with its comforts and finally to leave all their property to her.

It was this determination; no doubt, so frequently impressed on; the child’s mind by her doting foster parents, that led to the tragedy which Dollie is now expiating. They had told her so often that they would leave her their property that her childish mind could not understand why they did not do it. She conned the m atter over, dwelling on the advantages as a great lady she must enjoy with all the property of the old couple until life seemed the delightful time would never come. Why not hasten matters was the thought that broke like a gleam of light on her imagination and solved the problem. Yes, hurry them up. If they’re sick, they’ll make their will. Make them sick! So her girl companion advised her, and so she decided.

One day she wont to town to sell some eggs and then bought some rat poison, saying that she wanted to kill a cat.

The story of how she administered the poison and the incidents that resulted were told by the youthful prisoner herself as seated a t the barred door of her cell, with a huge paper cigarette between her teeth, she chatted with a Cincinnati Enquirer cor­respondent. She said that she had learned to smoke since her confinement in jail.

In answer to the question as to what impelled her to put poison into the coffee­pot she said that she had never thought of such a thing until an associate of hers, whose name she gave, asked her why she didn’t give Mr. and Mrs. Sarver something to make them sick, so that they would think they might die and then Would make a will and leave her all their prop­erty.

A t first she repelled the suggestion. But the prospect was alluring, and she made up her mind to try it. On the 12th day of July, 1895, she concluded to try “just a little bit of it,” as she expressed it. “Taking a little pinch between my thumb and forefinger, I dropped it into, the coffeepot, which contained some grounds, knowing  that the next morning Mrs. Sarver would make coffee without rinsing the coffee pot, as her custom was to throw away the grounds every other day, and that she had done the day before.”

Next morning the coffee was made, and as Mr. and Mrs. Sarver were taking their breakfast they drank freely of the coffee. Leaning back in his chair. Mr. Sarver said he felt a burning sensation in his throat and stomach. Mrs. Sarver complained of similar pains. Novella was sitting at the table with them, but drank none of the coffee, as she never used it. Mr. Sarver becoming worse, the girl was dispatched to a neighbor’s to request him to hasten for a doctor. By drinking freely of milk Mrs. Sarver saved her life. Mr. Sarver continued to grow worse, and the child became alarmed, realizing for the first time she had done a terrible deed. About this time it was learned that she had bought poison a few days before, and upon being confronted with the fact she finally acknowledged that she had put some of the poison in the coffeepot and hid the balance between two stumps in the pasture field. She took parties to the spot, and it was found at the place indicated.

A few hours later Mrs. Sarver breathed his last. After the death of Mr. Sarver Dollie walked to the town of Crothersville, four miles distant, and surrounded herself to J. W. Hamacher, a justice of the peace.

Dollie insists that she did know the deadly nature of rough on rats. “I knew the stuff would kill rats, but I did not think it would have any effect upon human beings more than to make them sick, and I thought I would try a very little of it to see what effect it would have. Why,” she added, “I wouldn’t have been afraid to take it myself, even a whole spoonful of it.”

Altogether it Is a most remarkable case. She manifests no contrition, and seems as merry and lighthearted as though her path was strewn with roses. She has no dread whatever of. the long term before her in the reform school. On the contrary, she speaks of her going as if it was like unto a pleasure trip. She says she will act nicely there, and by so doing hopes to shorten her term and perhaps secure pardon after the lapse of a few years. If she realizes the enormity of her crime, she does not evince it in her demeanor.

[“A Merry Mistress – Little Novella Belknap Manifests No Contrition For Her Crime. - Poisoned Her Foster Parents. – Sought to Hasten the Inheritance They Had Promised Her – Goes Gayly to Prison Without Seeming to Realize the Enormity of Her Offence.” On the St. Lawrence (Clayton, N. Y.), Oct. 18, 1895, p. 2] 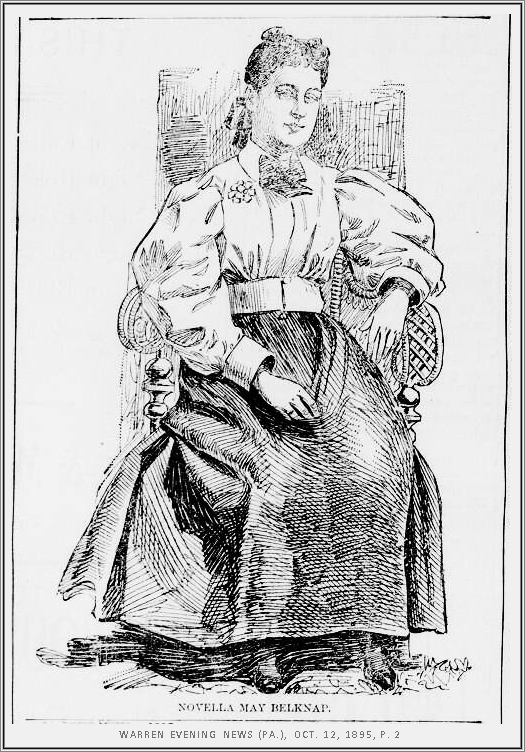 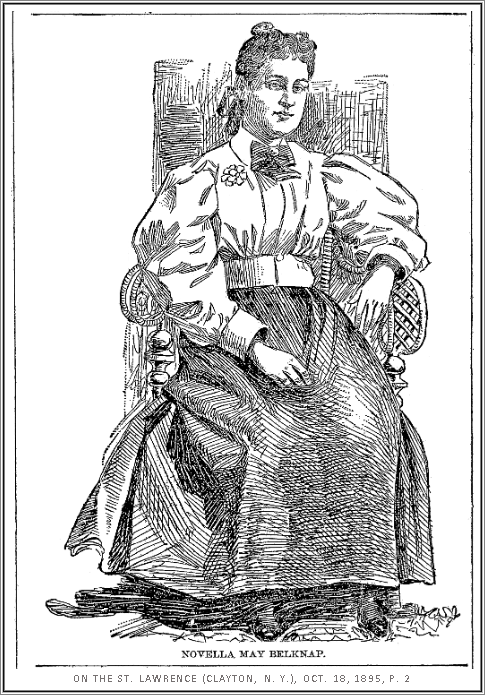