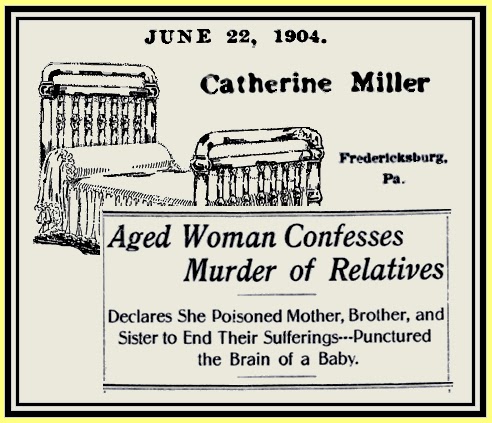 FULL TEXT: Lebanon, Pa., June 2 – No sooner was Catherine Miller laid in her grave than the village of Fredericksburg, where she lived and died was startled to hear that the kindly old spinster had confessed on her deathbed to the commission of four murders.

Three times the old woman told her strange, almost incredible, story of crime committed in the name of mercy.

“I killed my mother, Mrs. Jacob Miller sr., my brother Jacob Miller and my sister Mrs. George Albert because they so sick that death was a blessing I gave them white powders.”

“I killed the baby born to my niece while she was visiting me because the child was a disgrace. I thrust a pin into its soft little head and it died in a minute.”

Miss Miller, who was eighty three years old made this confession separately to Mr. and Mrs. Frank Zeigler with whom she made her home. She repeated it in the presence of a son of the Zeiglers. Then, declaring that her mind was at rest for the first time in years she fell asleep and died.

That was last Friday. Today, after the funeral the old woman’s story was made public. Miss Miller was an aunt of Mrs. Zeigler.

[“Confesses Murder of Relatives Declares She Poisoned Mother Brother and Sister to End Their Brain of a Baby.” Jun. 22, 1904, p. 5]


FULL TEXT: Lebanon, June 22. Miss Catherine Miller, an aged resident of Fredericksburg, seven miles from here, just before her death last Friday, confessed to four murders about forty years ago. On Monday, the day following the funeral, Mrs. Frank Ziegler, of Fredericksburg, with whom Miss Miller lived, made known the confession.

Miss Miller said that forty-six years ago her niece came from Illinois in disgrace. As the young woman had to go back home and the infant would have revealed her story, Miss Miller killed the child by 'thrusting needles into its brain and smothering it.

Later, Miss Miller said, she had given "white stuff" to her brother, Jacob Miller, her mother, Mrs. Jacob Miller, and her sister, Mrs. George Albert.

She became very angry at the Ziegler family for their disbelief in her story, saying: Don t you think 1 know what I did." On two other occasions she gave the same story to neighbors. As to motive, she said that all three of her adult relatives were very ill and she wanted to relieve their suffering and misery.

The Zieglers tried to keep the statement a secret. Old residents point to most convincing circumstantial evidence in the case. Dr. Smith, of this city, who attended Jacob Miller, says that "he died of an inflammation after a very short illness." He also remembers that the mother's and daughter's bodies were swollen to such an extent that it almost prevented placing the lid on the casket.