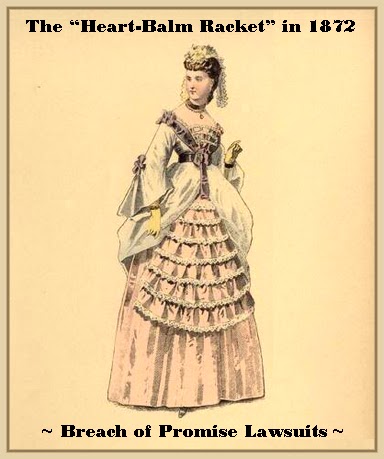 FULL TEXT: The Homan-Earle case, a noteworthy sensation of last year, is made fresh in public recollection by the argument on the appeal to the General Term of the City Court. This matter is amusing, contemptible, or important, according to the point from which it is vowed. It is a paradox of human nature that the passion of all others commands sympathy – what is technically termed the “tender passion” – is as often the occasion of mirth as of sadness. It would be curious to know whether more tears or laughter have been bestowed by disinterested persons on the woes of lovers. The line which here divides tragedy and comedy is very indistinct. Certainly there are no elements of the former in the Holman-Earle case. A mature maiden sues a maturer widower for damages for an alleged breach of promise of marriage. There is nothing tragically respectable in this. Shinplasters cannot mend a broken heart, even if a broken heart were among the possibilities in these circumstances. In the dramatic picture we cannot see a distressed creature, wan, woeful, forsaken, on the edge of suicide, perhaps, but certain to die somehow of a perpetual pang. We only see a thrifty person disappointed of a comfortable settlement, and resolved to repair the loss, if possible, by securing a good round sum of money. This is only amusing where it is not contemptible. The contempt provoked by the scandal is by no means confined to the plaintiff. Putting aside her allegations and the testimony by which she sought to sustain them, the admissions of the defendant, the facts conceded by the clever, but excessively low toned speech of his counsel, published yesterday, are enough to cover the defendant with ridicule and with scorn of the moat contemptuous kind. If, on the one hand, the plaintiff has incurred the sneers and derision of the public by seeking a moneyed compensation of the wounding of sensibility that ought to be nursed in delicate privacy, on the other hand the confessed behavior of the defendant is such not, indeed, as to “bring his gray hairs in sorrow to the grave:” that would be dignified and decent, but to make him a laughing stock wherever he goes and whenever he appears.

Beside these special amusing and contemptible aspects of the case it presents an important legal question. At the trial Judge Neilson held that even where there was no express promise to marry an engagement of marriage might be inferred from circumstances. This has been regarded as a new departure in marital jurisprudence. The able jurist who announced the rule expressed himself with customary clearness and emphasis. So far as any leaning was shown by the General Term yesterday it would seem that Judge Neilson’s associates are scarcely prepared to accept his doctrine. Leaving them to dispose of the question formally the public will still have its own opinions on the morality of the proposition. In favor of the rule it may be said that its tendency will be to make men and women more prudent and circumspect in their social intercourse. A forethoughtful young man will be extremely careful about approaching a young woman with amiable warmth or with the faintest show of kindly regard, if his genial overtures are to conclude him in a promise of marriage, despite a precautionary and positive disavowal of matrimonial intent. Such a rule of law, rigidly enforced, would make cordial companionship among other than people already married unsafe; and that universal and more or less charming activity described by the elastic term “flirtation” a pursuit ranging from the absolutely innocent to the extremely perilous would be limited to other men’s wives and other women’s husbands. This might be of doubtful advantage. But upon the whole it would work no harm were there something more of restraint imposed on the social intercourse of single people of opposite sexes. This is what might be gained morally by the proposed new rule. On the other hand it may be said that such a rule would impair the gravity and delicacy of the marriage contrast. To say that it is one of the most serious of contracts is to repeat one of the most hackneyed of truisms. So is it to say that it ought not to be lightly entered upon, that it should be thoughtfully made, and with the fullest consent and the clearest understanding of both parties to it. It is to be feared that if Judge Neilson’s ruling were relentlessly reduced to practice not only many “implied” engagements would be made lightly but life-long responsibilities would be assumed unintentionally and unconsciously. The thought might be amplified. Indeed it amplifies itself, and forces us to the conclusion that there would be no social safety save in the absolute non-intercourse of unmarried men and women. The decision to be pronounced by the General Term of the City Court is therefore very important and will be awaited with interest not free from anxiety.