What is Misandric Fixation? 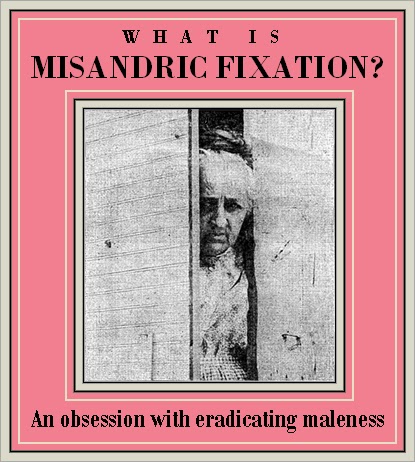 Q: What is Misandric Fixation?

A: An obsession with eradicating maleness

Contrary to what we might nowadays suppose to be the case, misandric fixation is not necessarily the result of subjection to ideological indoctrination. Historical cases reveal that the condition can take hold without the subject having been influenced by either Marxist or eugenics ideologies. Indoctrination can, obviously, exacerbate certain vulnerabilities in the subject – weaknesses of character which were pre-existent; yet indoctrination is not a necessary prerequisite to the misandric fixation condition.

By far the most well-known example of misandric fixation is that of Valerie Solanas, author of the 1967 feminist classic, S.C.U.M. (Society for Cutting Up Men) Manifesto. In 2011 public awareness of progressive feminist calls for the achieving of an anti-male utopia (to be manifested itself in violence against children and adults) was revived by the appearance of a Solonas-inspired organization in Sweden and by the disclosure of writings characterized by misandric fixation at a website called RadfemHub, founded by best-selling writer Pamela O’Shaughnessy.

***
Here are some notable historical cases of misandric fixation:

A famous Austrian misandrist, founder of a formalized misandric organization in Austria, plus two other famous European misandrists of the nineteenth century.


Writer who “aspired to found a new cult of “arrialsme” which would be a perfect expression of her hatred of the male sex, whose ultimate extinction she envisaged by the practice of universal virginity on the part of women.”

Personal misandry pathologized to the maximum by an Englishwoman.

Hatred of not only men, including those who would assist her in a dangerous emergency, but of all creatures male.


Writer who “had two favourite themes, namely that the great majority of men were infected with syphilis and that women should at all times carry guns against the omnipresent threat of assault from the predatory male.”

“Requisites for membership included a violent hatred of men.” The organization lasted only six months.

“Man is but one of a million humble fertilizers. Nature intended woman to reign supreme.” Marie Petti, leader of a secret ultra-feminist movement that has sprung up throughout the British Isles, … voiced this slogan of the new organization.

The life of a “man-hating” feminist on her “having it all” quest is described by a female author.

She preyed upon married men; suspected of murdering 12. – Quote: “I am an enemy of the male sex. Years ago a man wronged me deeply and broke my girl’s heart. I vowed to be revenged on him and his sex. I have kept my word, for I have made men suffer something of what I have suffered. They may say I am responsible for the death of these men, and they may even take my life for what they call my crime. If they do I shall be glad to die with the knowledge that I have paid my debt in full. I do not deny that I have derived pleasure from the sufferings of the men they call my victims. I have enjoyed every pang they suffered, every agony they endured. Pangs and agony have been balm to my wounded and bruised heart. My one regret is that I was not able to strike directly at the man who wronged me.”

Cross-dressing misandrist who formulated an original husband-murdering service which she farmed out to Hungarian wives in a mood for a change.

Sadistic Scottish woman who perfected the art of matrimonial terrorism, racking up 53 victims of her special psychological torture technique.

Since little boys grow up to be patriarchal oppressors, strong women like this infanticidal American are prepared to take action in the name of “social justice.”

Personal misandry pathologized to the maximum and then twisted into a utopian ideology by an American woman.

This woman was quite pleased with herself for running over a man with her car over and over again. “I feel no remorse over having killed him,” Miss Adams said. “I’d do it again. God and I are tired of men taking advantage of women.”

A bearded, cross-dressing, 37-year-old bandit named Zein Khattab Ghanzala for 10 years terrorized the entire Behaira Province in the Nile delta. She explained: “I began to grow the beard when I was only 14. After that no man would look at me. So I vowed to terrorize these weakneed male creatures – and I got my revenge in kidnapping and plunder.”

June Ann Olsen was a serial arsonist from Miami who, over a period of nine years, set scores of fires.  In 1962 she burned down an entire Miami city block. On numerous occasions she would lure men into motel rooms. After they were undressed, she would slosh lighter fluid onto the bed and torch it. “You ought to see them run,” she told one reporter. She told police: “I just hate men. They ought to stop the world – and push them all off.”

A very famous, but not in the least bit innovative, lunatic misandrist.

Affirming the central importance of promoting of the “hatred of men” (their words) is the central topic of the presentations.

A group of feminist women have an ideal “career” situation in mind that can be achieved, they believe, by making a false domestic violence report followed by a frenzied session of bludgeoning with kitchen implements upon the head of a hard-working, mild-mannered husband.

This female couple so despised heteronormatives that they set up a double date (for double murder fun) with two easy marks, but caught after one of the victims survived their murderous attacks. His friend did not.

At an event called "Patriarchy Slam," 40 women in the audience, many wearing scissors around their necks, laughed and clapped in response to misandric presentations, then broke into a light-hearted song about castration.

A 17-year-old girl confessed to stabbing to death 30 men within the period of two years.

How the profession of psychology is infected with rampant political bias.


A worshipper of Valerie Solanas.

This young American loves to write about her genocidal authoritatian fantasies of a feminist Utopia.


Another worshipper of Valerie Solanas. 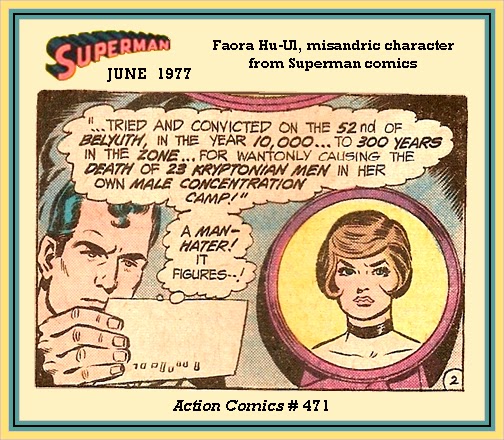 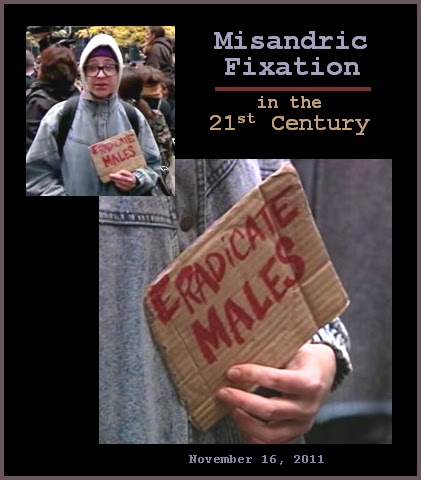