Rosemary West, One of the Most Shocking Sadists in Female Serial Killer History – England, 1994 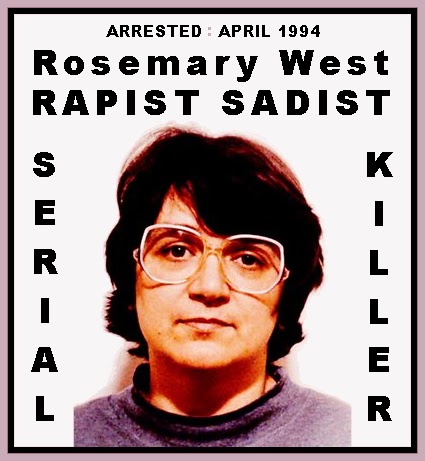 Since this a well-known and extensively documented case, whose details are easy to find in both internet and print media, this post will focus on only certain aspects. Of 11 murders recorded by Fred West, all but one involved wife Rosemary. While the crimes of rape, torture and mutilation of the victims – all of them female – is outrageous enough in itself, this case has an added horror of incest followed by torture and murder, involving Rosemary’s 16-year-old daughter and her 8-year-old step-daughter. The murders were committed in Gloucester, England from 1971 through 1987. It was through the arrest of Fred for a non-homicide crime that led to the discovery of what came to be called “The House of Horrors” in Gloucester.


EXCERPT: The exact nature of Rose’s relationship with Fred has also been the subject of much debate. Rose’s own line, once she was in custody, was that she had fallen under the influence of a bad man who had killed before he met her and who drew her into his madness: much the same argument that Mrra Hyndley had earlier employed about Ian Brady. Folie á deux. Plenty of people who knew the Wests not see it that way at all. Rose was the dominant partner, they thought, and it was Fred who was hopelessly besotted with her and did her bidding; did everything just to please Rose, in fact.

EXCERPT: Such women are usually highly sexed. Rose West certainly was having intercourse with up to five men during an average day of prostitution. On other mornings she had lesbian sex with a neighbour or she went out in the van at night to pick up other paying customers. Afterwards she posed pornographically for her husband Fred. Rose made lesbian advances on her male lodgers and took part in the sexual abuse of her daughter Anne Marie.

EXCERPT: The twisted fiend has enjoyed a string of lesbian romps since being caged and makes sure she takes her pick from the new women banged up alongside her. The 60-year-old is feared on Finchale Wing at Country Durham's Low Newton nick and controls the section with a rod of iron. Last night a source revealed: "Rose controls the wing as the senior prisoner and despite her age the rest of the girls are in awe of her.

"The staff look to her to keep things in order and she decides who is friends with whom and keeps things under control. She hates anyone in for drugs offences and thinks they are the lowest of the low - despite her being a serial killer. “She has her own single cell and spends a lot of time in there with girls she especially likes. She always gets the pick of the fresh meat and the girls know better than to argue with her because she can make life difficult for them with the staff.” 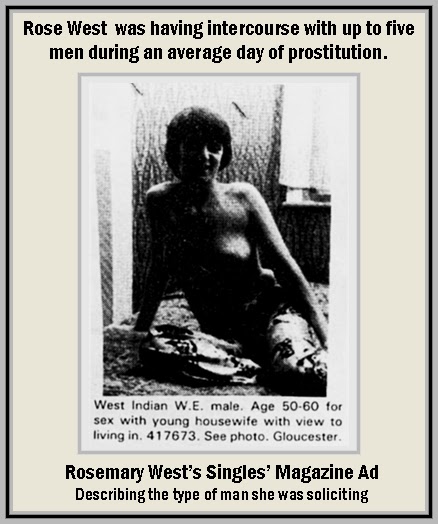 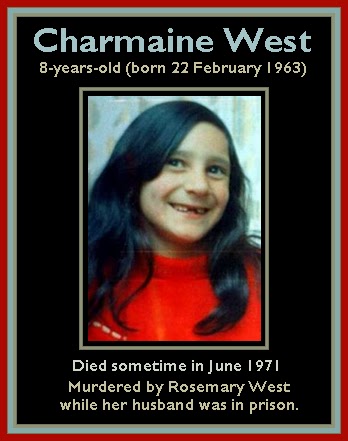 1) Charmaine West (8; born 22 February 1963): Rose’s step-daughter. Killed in June 1971 by Rose West while Fred was in prison, the motive said to be Rose’s wish to break links with Charmaine’s mother, “Rena.”

2) Catherine Bernadette “Rena” Costello (27; born 14 April 1944): Fred’s ex-wife. Killed August 1971. Rena had called to take Charmaine away with her and it is believed Fred West killed her to avoid an investigation into Charmaine’s whereabouts.

3) Lynda Gough (19; born 1 May 1953): Killed April 1973. A lodger at 25 Cromwell St, Gough and Rosemary would share lovers. Following her disappearance Gough’s mother called to visit and Rosemary, wearing Gough’s clothes and slippers, told her she had moved to find work in Weston-super-Mare.

4) Carol “Caz” Ann Cooper (15, born 10 April 1958): Killed November 1973. Cooper was living in a children’s home in Worcester when she disappeared while walking home from the cinema.

5) Lucy Katherine Partington (21, born 4 March 1952): Killed December 1973. Spent Christmas with her family in Cheltenham and visited a friend, and disappeared after leaving to catch a bus home. There is strong evidence that she had been kept alive for at least several days. A week after she disappeared, Fred went to a hospital in the early hours of 3 January 1974 to get a serious laceration stitched. A knife matching the cut was found with Partington’s body and police surmise he sustained the injury while dismembering it. Partington, a university student, was the cousin of novelist Martin Amis and the sister of author Marian Partington, who wrote about her sister’s disappearance and the discovery of her remains in her memoir If You Sit Very Still (2012).

6) Therese Siegenthaler (21, born 27 November 1952): Killed in April 1974. A student in South London who left to hitch-hike to Ireland and disappeared.

7) Shirley Hubbard (15, born 26 June 1959): Killed November 1974. Left a work experience course in Droitwich to return home but did not arrive. When her remains were found her head was completely covered in tape with only a three-inch rubber tube inserted to allow her to breathe.

9) Shirley Anne Robinson (18; born 8 October 1959): Killed May 1978. A lodger at 25 Cromwell St, Robinson was a prostitute for the Wests. Disappeared after becoming pregnant with Fred’s child.

11) Heather Ann West (16; born 17 October 1970) Daughter of Rose and Fred. Killed June 1987. Heather became the focus of Fred’s attentions after Anne Marie left home. She complained to friends about the abuse, and when this got back to Fred and Rose, they decided to eliminate her as Heather now risked exposing them. Also, Heather was probably sired not by Fred, but by Rose’s abusive father, Bill Letts. Fred West claimed he had not meant to kill her but she had been sneering at him and he “had to take the smirk off her face”. Rosemary told an enquiring neighbour the following day that she and Heather had a “hell of a row” so it is believed Rosemary may have initiated her death. The Wests told their children Heather had left for a job in Devon, but later changed the story to her having run off with a lesbian lover when she failed to contact or visit them. Later still Fred would threaten the children that they would “end up under the patio like Heather” if they misbehaved. Heather’s body was found under the patio that Fred had built over the fishpond dug by his son Stephen. Heather’s murder indirectly led to the Wests’ arrests almost seven years later. 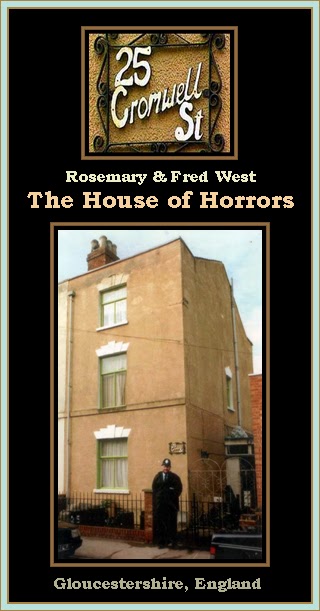 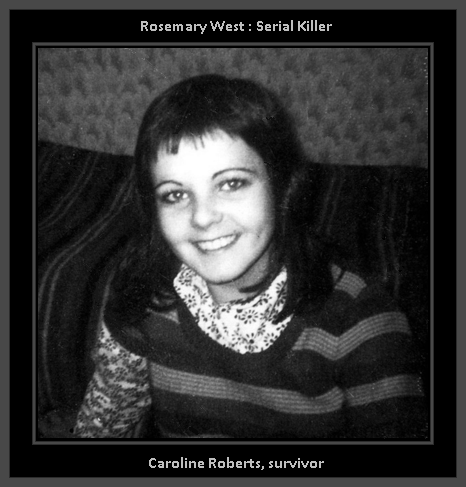 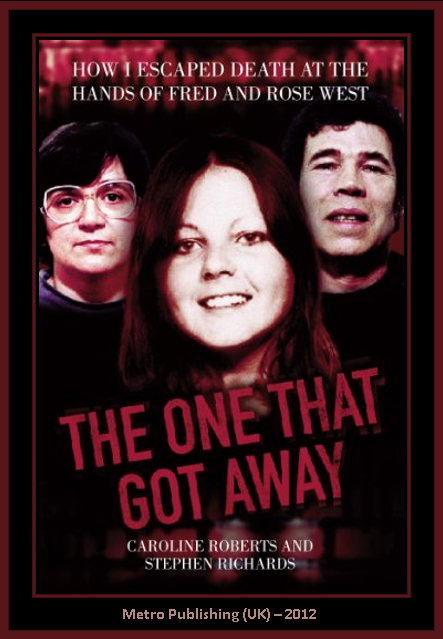 “When Caroline Roberts accepted a job at 25 Cromwell Street, the infamous address of Fred and Rose West, she was only 16. Realising that there was something very malevolent about the couple, she left their employment soon after, glad to be rid of them. The story should have ended there. A month later she was abducted by the Wests and suffered violent sexual abuse at their hands before being told that she would be killed and buried. Through a combination of sheer luck and quick thinking, despite the trauma of what had happened, Caroline managed to escape to freedom.” [Caroline Roberts & Stephen Richards, The One That Got Away, 2012, Metro Publishing] 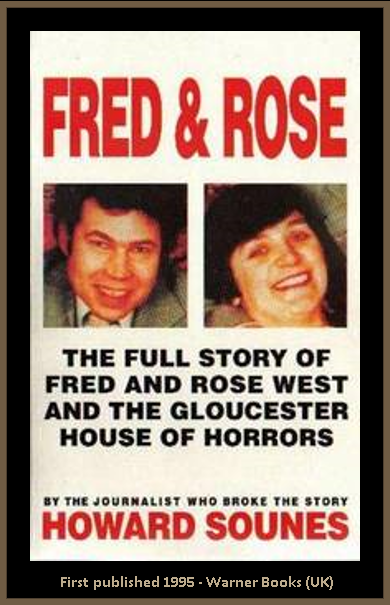 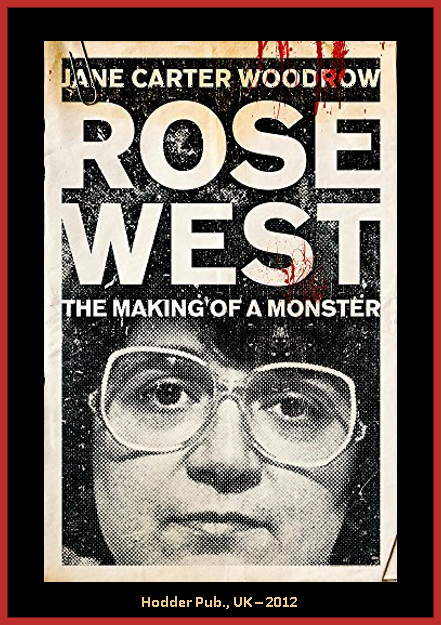 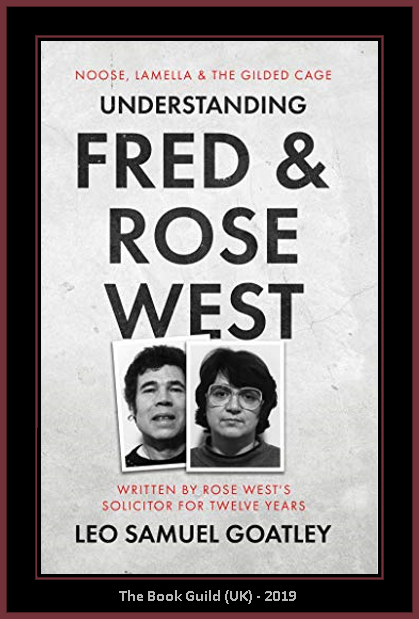