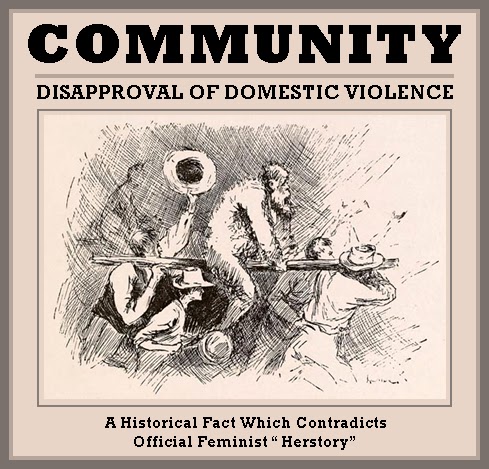 Ever since the 1960s feminist professors, lawyers, journalists and government bureaucrats have been lying to the public about domestic violence. Among the armada of fabrications floated by these propagandists is the slanderous claim that through the 19th century and the first half of the 20th society was tolerant of domestic violence against wives. The claims are false, but are still perpetuated by thousands of “experts” and by respected law publishers to this very day.

This myth of the social acceptance of domestic violence against women is necessary to keep alive if the feminist social engineers wish to keep the “rule of thumb” hoax (the infamous “law” that never was a law) going.

IMAGE: The headline illustration from Mark Twain’s Huckleberry Finn shows two of the punishments – riding the rail and tar and feathers – that in days gone by were conferred by communities upon male perpetrators of domestic violence against women.

Here are quotations of phrases which demonstrate how domestic violence was seen by society during the period in which feminist experts falsely claim that domestic violence against women was seen as a “private matter,” went unpunished and was considered socially acceptable. The historical fraud, still widely propagated in an important part of the foundational rationale for the build-up of the Bill of Rights-defying, authoritarian and lucrative domestic violence industry.

1853 – “It is a pity that every vile rascal who beats wife could not served in the same manner.” – Hines

1871 – “He was adjudged guilty and sentenced to thirty days in the chain-gang, a punishment he richly merits.” – Swan

1876 – “All right, our Sheriff is a skillful hand with a buggy whip, we presume he will settle with all our wife beaters. Pay them off in their own coin; our reporter [Los Angeles Herald] will be on hand.” – Los Angeles

1876 – “In the California Legislature, senate introduced a bill to summarily punish wife beaters, to the effect a battery, if inflicted upon the wife the assailant, shall be punishable by the infliction of no less than twenty-one lashes on the bare back to be administered by the Sheriff of the county, under the direction of the court or judge. This is very good, but capital punishment would better.” – Tucson Arizona newspaper reporter

1886 – “the cowardly savage”; “If the villain looks to his safety, he will never again return.” – Gibson

1893 – “It does us good whenever we learn of a wife beater getting punished.” – Schnell

At present the “politically correct” social engineers indoctrinated in collectivist ideology, with the entire arsenal of the post-Constitutional government of Washington, D.C. and the leadership of the multi-national corporations, which treat people as mere “human resources,” have the power, yet: