FULL TEXT: New York, May 29. – Testimony is now being taken in New York in the suit brought by Baroness Ursula von Kalinowski against Michael J. Hurley, paint manufacturer of St. Louis, for $2,500,000 damages for blighted affections.

Affection to the value of two and a half million dollars is certainly SOME affection even when you consider that it was lavished upon the fickle and unworthy Hurley by a high-born German baroness.

In her deposition the noblewoman said that she had followed Hurley from one city to another in Europe and finally across the ocean in response to telegrams in which he promised to marry.

I think nearly all women FEEL the same way about breach-of-promise suits, to-wit, that they are sordid, disgraceful, and that no really self-respecting woman is ever involved in one.

But if we accept the logic of the present economic status of woman we simply cannot THINK as we FEEL on the subject.

A woman like the Baroness Kalinowski has NO ACTUAL VALUE.

Without either trade or professional training, her economic worth is represented by zero. She has nothing to give anyone save the problematical quantity called “affections.” Now affections when they are offered for sale are worth precisely what you can get for them.

The baroness thought she had arranged a life transfer of that exceedingly perishable commodity to a man worth millions. If the buyer backed out of his contract assuming there was one then the baroness is damaged to the full value of her blighted hopes.

Admitting that the woman who puts a commercial value upon her love sets herself before the world as livestock. she is entitled to damages nevertheless, just as any other prize animal is damaged in reputation and saleability if the man who has arranged for this purchase refuses to complete the bargain.

There is no getting away from the fact that so long, as sex is generally regarded as something which women have to sell and men to buy, we shall have breach-of-promise suits, the known as alimony and all similar social weeds which owe their noxious being to the economic dependence of women.

Until women regain the eugenic choice of which she alone among all females is deprived, she has the right to set a value in money upon her alighted affections.

Her affections are the tools of her trade, her means of livelihood. Damage to them is the most serious injury she can receive. So long as she profits by their disposal she must be damaged by their rejection. 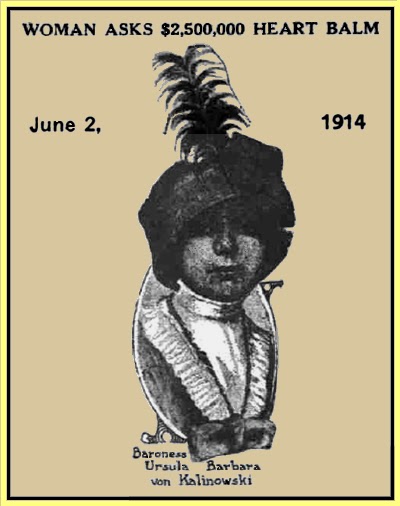