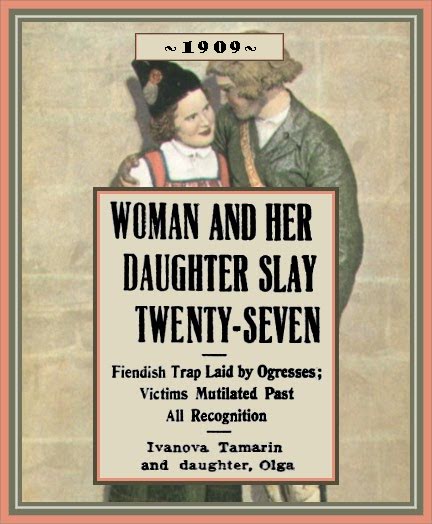 It has recently been found that the German newspaper articles appear in June 1912 in Germany are reprints of an article that appeared originally in 1909. [Neues Wiener Journal 1. Mai 1909, p. 9]

People remarked that numerous men and women, decoyed to the house of Ivanova Tamarin and her 17 year old daughter, Olga, were never seen returning. The discovery in a neighboring wood of corpses, mutilated beyond recognition, led to the house being surrounded by a force of gendarmes under Colonel Vassiteff.

Ivanova and her daughter were secured after violent resistance, and a search of the premises resulted in the discovery of 27 corpses in a storehouse, as well as a great number of watches, purses and other articles of value, and a quantity of male and female garments.

The eating room of the house was furnished with a trap door, through which the victims were precipitated into the cellar. In the cellar murderous instruments and fetters of all sorts were found.

The women confessed to being at the head of a band which, during recent months, had robbed and murdered 40 people who had been decoyed to the house by Olga, and mentioned thirty other peasants belonging to the band, who were also arrested, while nine others escaped.


FULL TEXT (translated from German): According to reports from Petersburg, the "American Murder Farm" [1908  Gunness case, Indiana] papers at that time, has been greatly surpassed by the murder cave of a Russian peasant woman named Olga Ivanova Tamarin.

In the village of Kurdino, in the province of Novaja Ladoga, the farmstead of the old peasant woman Tamarin, who lived here with her young daughter Olga, very often had middle-aged men and young men who were never seen again afterwards. It was known that the farmer's wife had a respectable field and house, as well as a considerable amount of money.

It had been rumored for a long time that old Tamarina understood how to take all visitors around the corner in some way and to take possession of the money that had been carried. The care was made by the following incident to the certainty. In recent months, repeated finds of corpses that bore visible signs of violent death have sent the county police of Novaya Ladoga on the move. Many mysterious bodies were found near the village of Kurdino. A few days ago, on the banks of a creek, the body of a young man was again found disfigured: the man’s cheeks had been cut out and the chin had been cut off. After much effort, the police were able to establish that it was the corpse of the missing Abdul Haligulin, a wealthy merchant who last had stayed in Kurdino, where it is certain he was overpowered by the widow Tamarin.

Her exposure unfolded like a real-life Sherlock Holmes story. A secret policeman named Vasilyev disguised herself as a woman begging in the courtyards. He succeeded in penetrating into the homestead of the peasant woman Tamarin, where a terrible odor of corpses, which came from a locked storage, put him on the track.

No sooner did old Tamarin see the detective, who was disguised as a beggarwoman, she and her daughter tried to kill him. Only his swift escape saved him. The old shrew an ax at him that was later found stuck in the wooden wall of the store. The detective soon back to arrest Tamarin. After some brief resistance, the farmer's wife and her daughter were overwhelmed and placed in shackles.

The house was then inspected and a terrible discovery was made. There were still 27 corpses of men in the storeroom, all had been murdered by the two horrible women. Furthermore, a mass of valuable treasures, jewels, purses, rings, goods, men's clothes and other objects of value were found in the homestead. In the dining room was a  trap-door, through which the unsuspecting visitors were dropped down into the cellar. In addition, weapons of all kinds, murder tools of terrible shape, and fetters were found here. It seems as if the woman had a great deal of complicity in the village with the dreadful work. A total of 21 farmers suspected of complicity, were arrested and taken to prison. The investigation should bring forth much more gruesome details that are as yet unimaginable.

[“Murder Factory. A man trap in a Russian village. - Twenty-seven bodies in the barn. - Women at the head of a murder organization.” Czernowitzer Allgemeine Zeitung (Vienna, Austria), 23. Juni 1912, p. 3]

FULL TEXT (translated from German): The Russian police have made terrible discovery in a village on Lake Ladoga. She has found a veritable pit of murder in which from time immemorial the most gruesome crimes could happen, without anyone having had any suspicion. Away from the village is a the half-decaying house owned by the farmwoman Tamarin in which she lives with her daughter Olga. Frequently villagers saw men enter this house, but they did not leave. But they did not worry about it and told themselves that they had just quit the premises in an unguarded moment.

In the nearby woods men's corpses were found, more and more as time passed. And there were some such grisly finds again later. . . . At last, suspicion was aroused, and the widow's house underwent a thorough investigation, which, however, produced a terrible result: in the storeroom alone, 27 male bodies were found. There was money and jewelery in the house, all originating from robbery. They also discovered a trapdoor that led into a deep cellar that broke their necks and limbs. There was a collection of murder tools in the cellar below. The two arrested women confessed that they had about thirty accomplices in the village; that they were only members of a big gang. The police made numerous arrests, forty men having had been murdered in the last few months alone. . . . One reads this like a chapter from a book of faith – as if  this report was brought from the killer pit not by news distributor but by the telegraph messenger – that they are bare facts still possible in the darkest Russia.

FULL TEXT (Translated from Hungarian): St. Petersburg, May 6 – In the village of Kuddin (Ladoga Governorate), the Gendarmerie today arrested an old woman named Tamarin and her daughter who had killed at least 130 men.

The beautiful girl in her neighboring villages preached through her acquaintances that she wanted to get married and they sent men to marry her.

Almost every day a man came to the house at the end of the village, and none left the house alive.

Finally, the matter aroused suspicion and the police began to search.

Today, gendarmes broke into Mrs. Tamarin's house and the two women defended themselves with a revolver.

It was very difficult to render them harmless.

Buried under a hay stack and buried in the barn, 127 heavily decomposed male corpses were found. 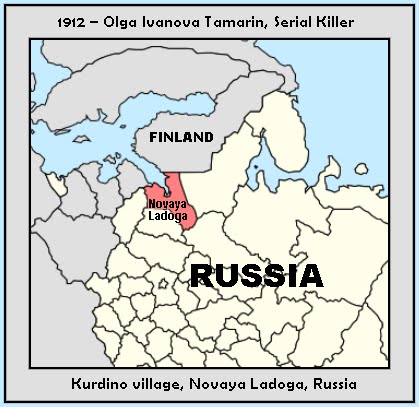 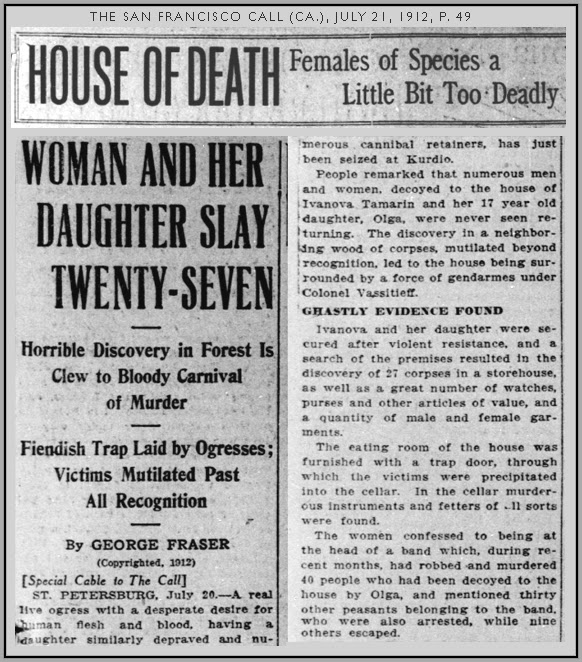 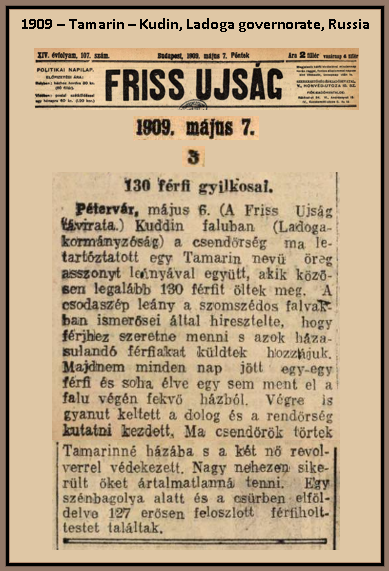 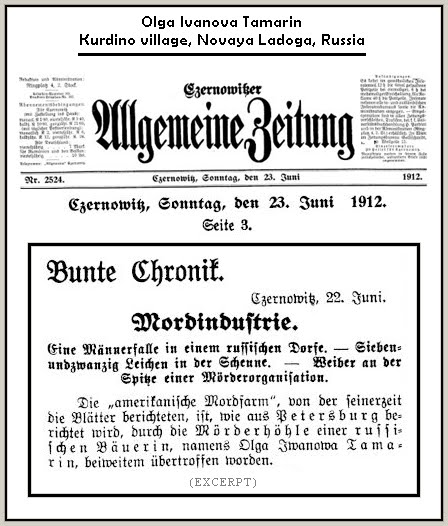 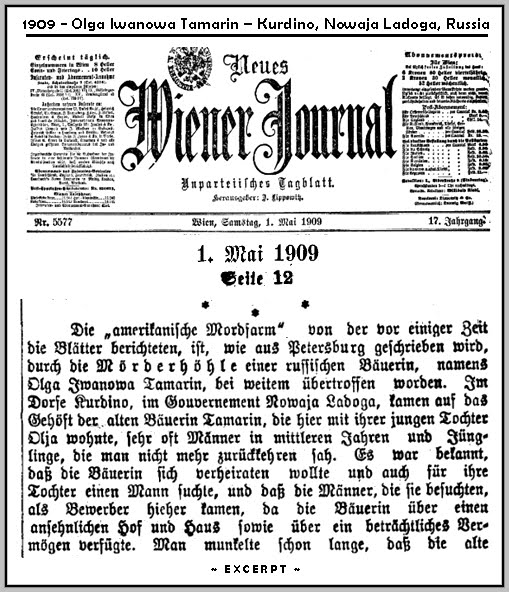