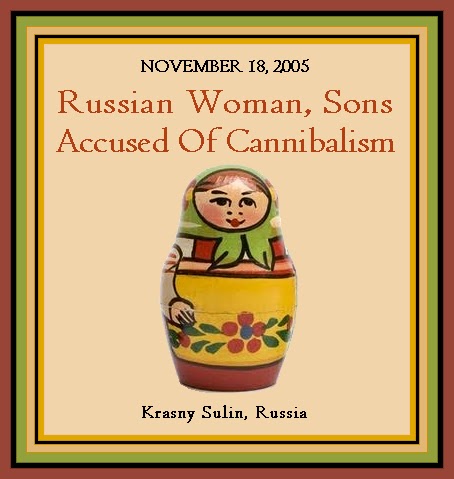 A woman in her late 30s and her two teenage sons, born in 1986 and 1989, whose names were not disclosed, were arrested in November 2005 in in the Rostov region town of Krasny Sulin, about 925 kilimeters south of Moscow, charged with strangling a man and eating his internal organs. Regional police spokesman Alexei Polyansky stated they strangled the local man during an argument. Polyansky said the suspects were being questioned and would be sent to a psychiatric clinic to undergo tests. [UHoM]
[Based on: AP, “Russian woman, sons accused of cannibalism,” The Age (Sydney, Australia), Nov. 18, 2005]
***