An Acid Queen Gets the Chivalry Treatment: Mary Waite - 1927 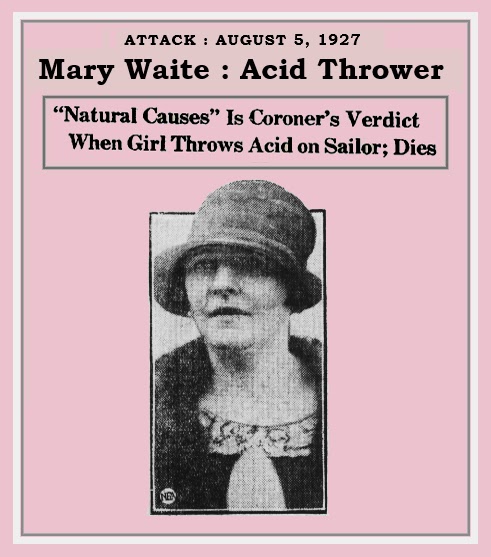 FULL TEXT: London, Aug. 10. – A coroner’s jury today decided that Louis Fisher, refrigerating engineer of the United States Shipping Board steamer, American Trader, died from “natural causes” and that Mary Waite, 24-year old stewardess, did not intend to do him “any serious harm” in pouring acid over him while he slept.

Fisher died aboard the American trader at sea last Friday [Aug. 5] and Miss Waite was arrested when the vessel arrived here. Captain H. C. Fish, master of the American trader, testified that Miss Waite had told him she threw acid on Fisher to disfigure him because of his attention to other women and that she had no idea of ending his life.

Miss Waite later appeared in the Dow street police court and was discharged. She will sail for the United States tomorrow under a deportation order.