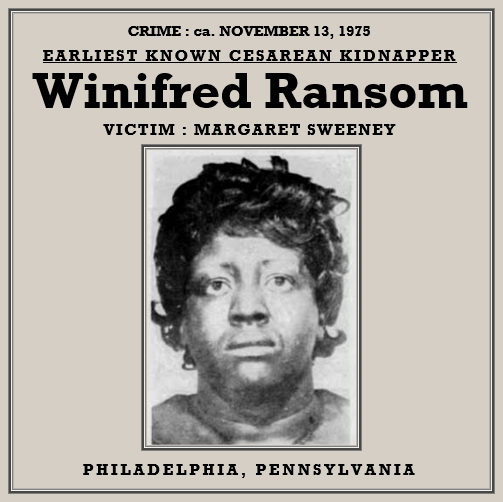 There are 24 known Cesarean Kidnapping cases, 25 if we include the institutional cases of the 1976-1983 Argentinian “Dirty War.”

FULL TEXT (Article 1 of 4): Philadelphia – A West Philadelphia woman has been charged with murdering the mother of an abandoned infant girl. Police said Margaret Sweeney, 26, had been hacked and shot to death, then buried in a shallow grave after giving birth to another baby by Caesarean section.

Detectives said Winifred Ransom, 36, allegedly struck Mrs. Sweeney at least 20 times with a hatchet and snot her three times. She is charged with murder, conspiracy; possessing an instrument of crime and recklessly endangering another person, police said.

Police had been searching for Mrs. Sweeney since Thursday, when her 18-month old daughter Tammey was found abandoned in a station wagon in north Philadelphia. Mrs. Sweeney’s two other children live with her father, William Griffith, in Nesco, N.J.

A newborn baby was found upstairs in Mrs. Ransom’s home. Police said Mrs. Ransom knocked Mrs. Sweeney unconscious while she was visiting at the Ransom home. She performed a Caesarian section on Mrs. Sweeney, apparently because she could have no children of her own and “wanted a baby badly,” police said.

When the pregnant woman regained consciousness during the operation, Mrs. Ransom struck her with the hatchet and fired the shots, officers said. According to police, Mrs. Ransom then buried the dead woman beneath the floor boards of her kitchen shed.

Police said they were alerted to the murder by Mrs. Ransom’s common law husband, John, 40, Saturday afternoon. Detectives said they found the body wrapped in a white sheet inside a plastic bag. A hatchet was also found in the kitchen, they said.

Mrs. Ransom admitted performing the crude Caesarean section on Margaret Sweeney, 26, of Philadelphia and killing her with a hatchet and two shots in the head from a 32-caliber revolver. The premature baby survived and lives with her grandfather, William Griffith of Nesco, N.J.

Psychologist Jan Grossman testified in the nonjury trial that Mrs. Ransom was driven by a psychotic delusion triggered by her inability to have children. As a result, she could not tell right from wrong, Dr. Grossman said.

Mrs. Ransom’s common-law husband, John, testified that his wife told him she bore the child herself and killed Mrs. Sweeney when “she tried to take my baby.” Ransom, who said his conscience bothered him, went to police three days later.

Police found the body last Nov. 16 buried behind the Ransom home [error: it was under kitchen floor].

FULL TEXT (article 3 of 4): Psychiatrists have recommended the release of a woman who was committed to a mental hospital 17 months ago for killing a pregnant woman and cutting out her baby.

The district attorney’s office says it is powerless to prevent the hospital from letting the woman go because she was acquitted — on grounds of insanity.

Winifred Ransom, 38, who admitted at her trial that she shot and bludgeoned the woman and removed the baby with a butcher knife, is no longer insane, doctors at Byberry State Hospital said.

Margaret Sweeney, 26, the woman Mrs. Ransom admitted killing, was eight months pregnant at the time of the incident in November 1974. Her infant, a girl, survived and is being raised by relatives. Mrs. Sweeney and her husband were estranged.

Mrs. Ransom was acquitted in July 1975. Psychiatrists testified at her trial that she was driven by a psychotic delusion caused by her inability to bear children.

“If you discharge her,” Judge Stout wrote in reply, “she is your responsibility and not mine. I really cannot understand how, in all circumstances of this case, you can recommend discharging Mrs. Ransom to go out into the community and resume normal life.”

The request for release was the third from the hospital. Five months after Mrs. Ransom was committed, doctors asked that she be released for the Christmas holidays in 1975 because her condition had improved considerably, according to court records.

But she had not been declared sane and both the judge and the Philadelphia district attorney denied the request.

Two months later, Dr. George Buck wrote that the woman was “in good condition” and should be transferred to an out-patient facility.

The district attorney’s office also denied that request and wrote that “due to the horrendous nature of the offense... this office seriously questions the advisability of such a recommendation by hospital officials at this early date “

Doctors involved in the case have not been available for comment.

However, Dr. Anthony Dunfield, a spokesman for Byberry, said “We’re concerned about doing what’s ethically and legally proper. There are civil rights involved ... You can’t lock up a healthy person forever and throw away the key “

FULL TEXT (Article 4 of 4): Philadelphia – A woman who performed a caesarean with a butcher knife so that she could have a child of her own has been released after serving 20 months in a state mental hospital.

A spokesman at Byberry State Hospital said Tuesday [Mar. 8, 1977] that doctors were required by law to release Winifred Ransom, 38, at her request after they had determined she was no longer, insane.

Mrs. Ransom admitted shooting Margaret Sweeney to death in November 1974, and using a butcher knife to remove the woman's baby. The baby girl survived and is being raised by relatives.

Psychiatrists testified at Mrs. Ransom's 1975 trial that she was psychotic, out of touch with reality and driven by a delusion related to her inability to bear children.

The doctors said they expected her to be hospitalized for “a long duration.”

But by last December, Dr. Albert Solomon, who was treating Mrs. Ransom, the Byberry Superintendent Franklyn R. Clarke, said she had been cured and could be released.

Since Mrs. Ransom was acquitted because of her mental condition, she cannot face charges in the killing again.

Judge Juanita Kidd Stout, who presided at the trial in Common Pleas Court, call the situation “Really a sad state of affairs.” 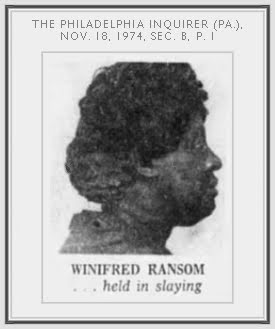 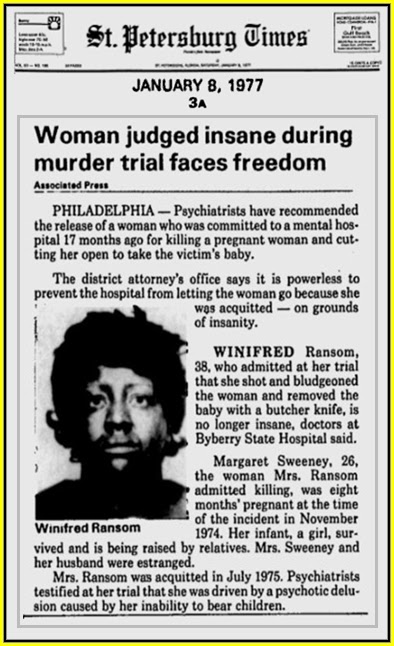 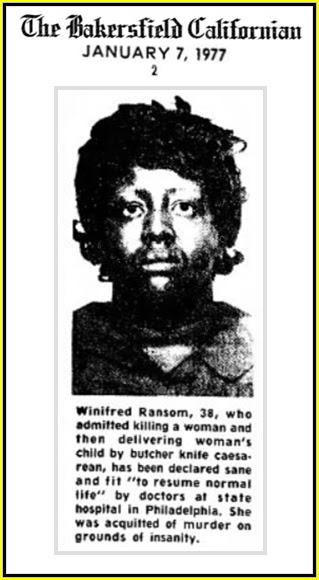 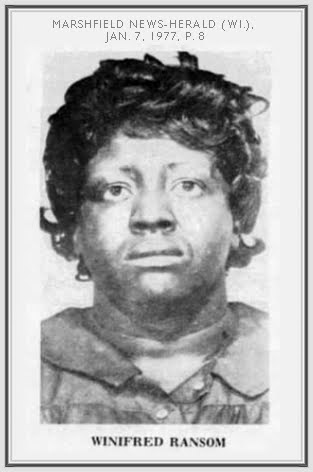 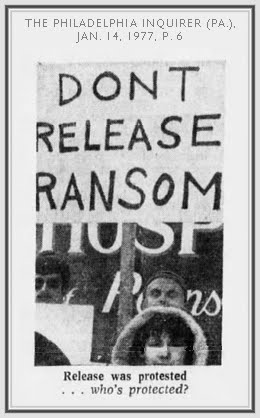 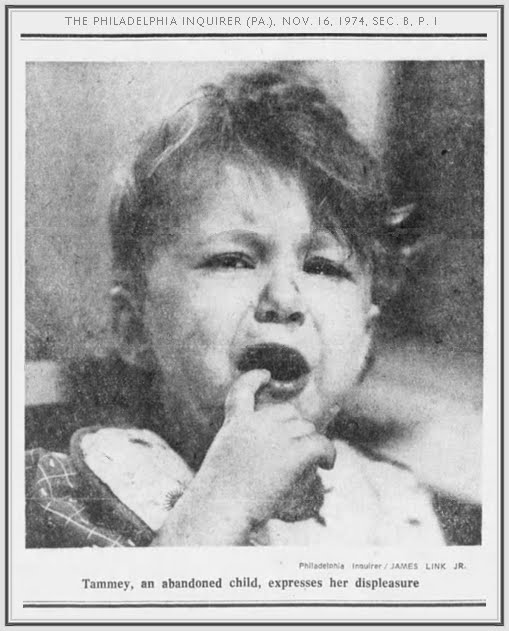 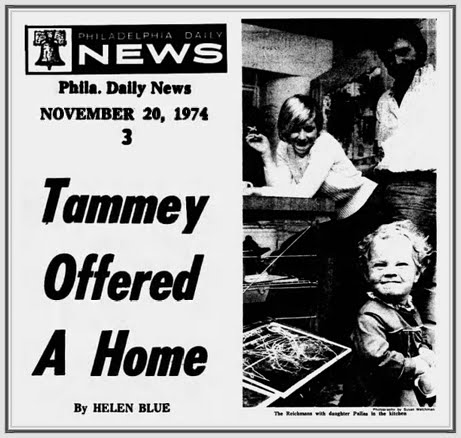 
FRONT PAGE: Ronald and Jacqueline Reichman stood in their large, cheery kitchen. A fire smoldered in the huge open fireplace and the pleasant scent of burning wood was spreading.

As the wood crackled and fell, the Reichmans began explaining why they wanted to adopt 18-month-old Tammey [error: "Tammy" is correct] Sweeney, a victim of the kind of urban violence that rarely touches their 200-acre farm in Phoenixville.

She had been hacked and shot to death. And her alleged killer, Mrs. Winifred Ransom, apparently had performed a Caesarean section on the dead woman, delivering a live 5 ½ pound girl.

“I saw Tammey on television several times,” said Mrs.Reichman, 32, “I saw these great big eyes looking at the world,” and suddenly I wanted her to see something better.”

As they talked, 2-year-old Pallas raced through the house. The Reichmans feel Tammey would be a great sister and playmate for their daughter.

Reichman is aware that adoption is not easy.

Welfare officials say they first will try to place Tammey and her unnamed sister in the custody of their natural family. If unsuccessful, an investigation of available adoption application will be conducted “to find a family that suits the children’s needs.”

Mrs. Sweeney’s husband apparently left her two years ago. A friend said her other two children, Michele and Kim, are living with their grandparents in Nesco, N. J.

The newborn is in good condition at Philadelphia General Hospital. Tammey is under medical observation at Hahnemann Hospital. 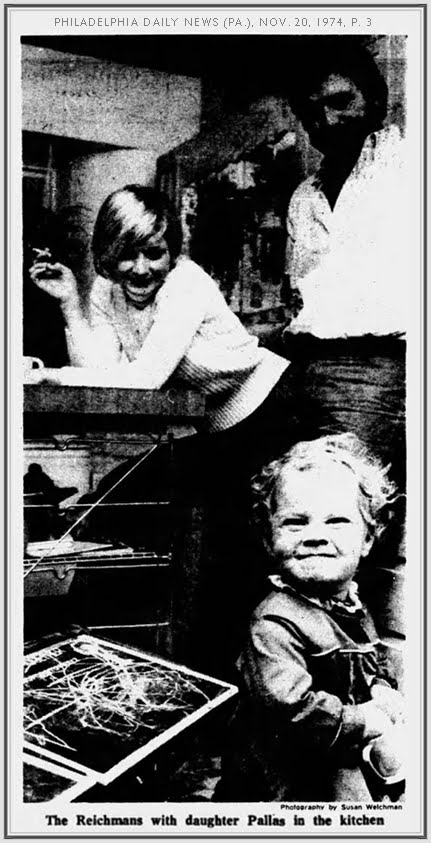 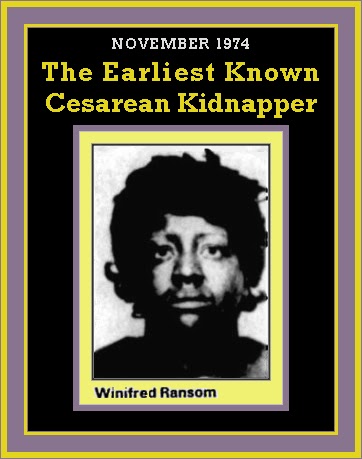