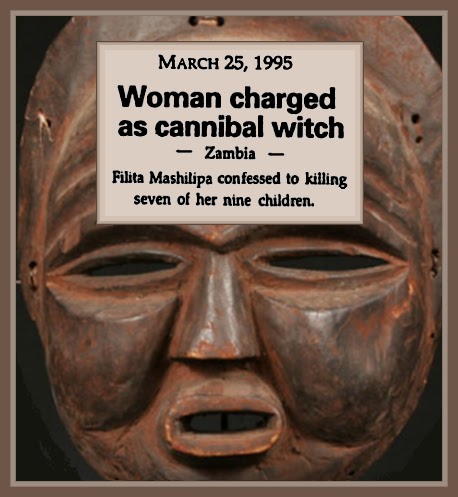 FULL TEXT: Lukasa, Zaire – A woman accused of murdering seven of her children and eating parts of their flesh was sentenced yesterday to six months in jail for illegal witchcraft practices.

Magistrate Kenny Mwanangumbi said the 60-year-old woman, Filita Mashilipa, may be tried later for murder depending on the outcome of a police investigation at her village in remote western Zambia.

Police have said Mashilipa confessed to killing seven of her nine children. They seized devices that she said enabled her to fly, and said she claims she can turn people into midgets.

Economic hardship in the region has been blamed for an apparent resurgence in superstition and witchcraft.

Wikipedia: Many recent studies feature the Mangbetu as a historically cannibalistic people. According to Mangbetu men interviewed in the documentary Spirits of Defiance: The Mangbetu People of Zaire it appears that many Mangbetu currently believe their ancestors to have practiced cannibalism. David Lewis asserts that a "wave of flesh-eating that spread from inveterate cannibals like Bakusa to Batetela, the Mangbetu, and much of the Zande" resulted from ongoing political disorder caused by Swahili raids in the 1880s.