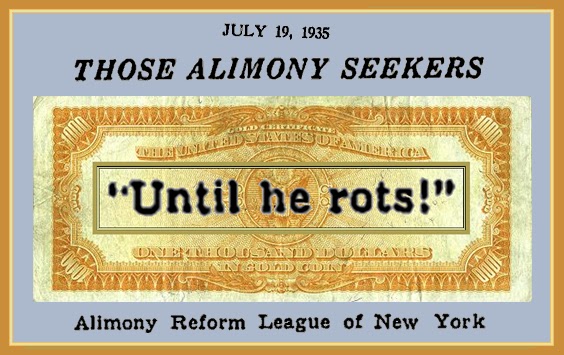 The present-day passionate devotion to the notion of a police state – with its kidnapping, theft of property, mental torture (alienating children from their fathers), and state-condoned homicide – which is exhibited by present day cultural Marxists (“feminists”) was not shared by mainstream feminists in the early 20th century, but such devotion to tyranny was throughout the entire 20th century – as it is today – indeed shared by a large population of sadistic sociopaths of the female sex (link to 1912 article*).

There has always been a large number of female sociopaths, despite the failure of psychology researchers who use male criteria on female subjects – resulting in skewed unreliable comparative statistics.

The following articles demonstrate that the sociological tendencies which result in misandric behavior need not have the trappings of political “theory” to be pervasive and damaging – all with the active support of “white knight” males.

The organization discussed in the following 1935 article is but one of many such early men’s rights organizations formed in the 1920s and 1930s to combat the Alimony Racket.

FULL TEXT (Article 1 of 2): What do you suppose an ex-wife is thinking about when she has her husband put under the jailhouse for not paying alimony?

That question has bothered thousands of former husbands who from the inside of the jail saw no rhyme or reason in it. It led to formation of the Alimony Reform League of New York, which inquired into the subject. Now the story can be told.

Such women are psychopathic cases almost every time! And they are sadistic! At least they are bordering on some kind on some on some kind of psychosis that approaches sadism.

The Alimony League got back about one-half of 2,000 questionnaires it sent out. The first three questions ran: “Why did you send him to jail? Are you satisfied now that he is in jail? How long would you like to have him remain there?”

More than one-fourth of the women answering the first question declared he belonged in jail, deserved it. About 63 per cent were tickled to death with the status of everything in answering the second question. They were satisfied. About 21 per cent were sorry, the rest, undecided. 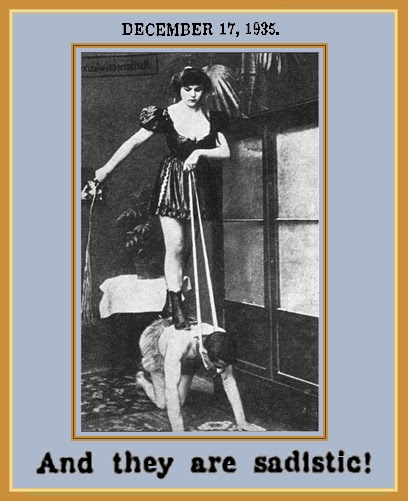 Answering the third question, 49 per cent – on how long he ought to be kept in jail – declared: “Until he rots!” Their composite view of the man in jail – the “ex” – was expressed in the most fulsome eloquence:

“My husband had the grace of a hippopotamus, the brain of a gnat, looked like a giraffe, stung like a wasp, and he had the personality of a dead salmon.”

Perhaps some slight exaggeration crept into the description.

And to the question of them not getting any alimony as long as he is in jail, the answers tended to sum up to this:

“That’s perfectly all right with me. I’ll get along without his money.”

That, of course, really doesn’t make sense, but perhaps it’s the reason that the Alimony League declares that women who send husbands to alimony jails “suffer from some sort of mental ailment.”

FULL TEXT (Article 2 of 2): New York. – The alimony reform league set out today revise the state’s archaic marital laws. If successful, a lot of time and carfare will be saved New York couples who have agreed to disagree – and Reno’s divorce mill will loose its best customers.

Another result might be a “for rent” sign on that unique institution of the metropolis, the “alimony jail” in which may be confined, for as long as the woman in the case desires, former husbands unwilling or unable to keep up alimony payments.

The league’s campaign began with submission to Gov. Herbert Lehman and John W. MacDonald, secretary of the law revision commission, of six proposed new marital laws, designed to bring the richest and most populous state in the union up to date in dealing with the marriage problem.

The two most important measures sponsored by the league, said Jack Anthony, executive secretary, would establish the right to sue for divorce after a separation, and would establish a new marital court.

“It is positively ridiculously inhuman for the law to require two people to remain married to each other after they have been legally separated and are living apart,” Anthony said.

After a couple have gone through the court procedure necessary to secure a separation and have failed to effect a reconciliation during a two-year period, it is logical to assume that their marriage has proven a failure. From every social and economic standpoint, separations are impractical and unsound.”

Another new law urged by the reform league would establish a five-day period which must elapse between issuance of a marriage license and performing of the ceremony, similar to laws now in effect in 20 states.

Establishment of a separate and distinct court to hear only cases arising out of the marriage status would prevent attorney from “shopping around” among scores of judges, often leading to action by judges unfamiliar with all circumstances of the case, if not to actual miscarriage of justice, Anthony said.

The other new laws recommended provide for absolute divorce after a two-year legal separation on motion of either party, and reform the alimony statutes – particularly by providing that a man may not be sent to jail for non-payment of alimony, without first having an open hearing in court, at which witnesses are orally examined and cross-examined.

From another source: Although Jack Anthony had printed on his questionnaire form that answers need not be signed, 90% of the returns were signed anyway. Indeed 40% of the women called on him personally to enlarge their views. Among the written responses was one which threatened his person.

Among the responses not quoted in the articles above was this candid admission: "I heard so much about the alimony jail and I wanted to see the inside so badly that I sent my husband there so that I could visit him."

Anthony concluded that the jailing wives represented in his study wives were unmercenary, at least in the sense that they would rather discomfort their husbands than get money from them. This facts is where it was inferred that need for, or greed for, money was not the dominant theme in women’s court petitions for putting their ex’s in jail. Bur rather, the pleasure gleaned from seeing the man suffer was of greater value.

NOTE: The photograph illustrating social justice (empowered woman with inferior being) did not appear in the original article. 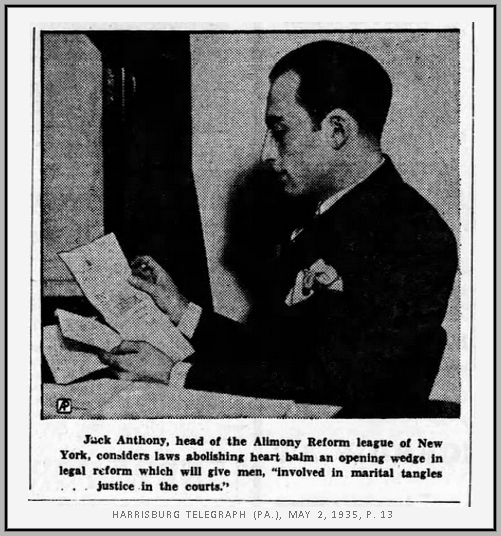 
For the story of a suicide caused by Alimony Sadism see: “A Fatal Case of Alimony Racketeering - 1932”