“America is suffering now for lack of the red blood of those who rebel”: William Evans’ Rebellion - 1936 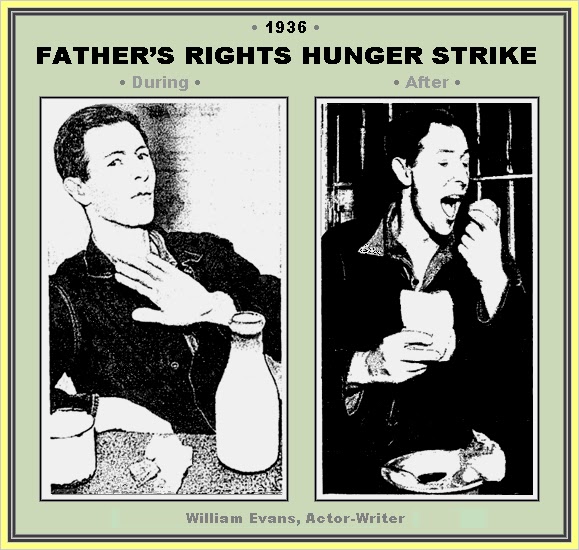 FULL TEXT (Article 1 of 3): Stubbornly insisting he never should have been arrested for assertedly stealing his own child, William H. W. Evans, Ojai actor-writer, yesterday completed the twelfth day of a hunger strike launched in the County Jail as a protest against his incarceration.

Evans was arrested Thanksgiving Day on complaint of his divorced wife, Mrs. Elizabeth Evans, who charged him with taking the 6-year-old daughter of the couple, Deirdre, from Mrs. Evans’ Brentwood home.

Nothing except water has passed Evan’s lips since his arrest.

“I’m not going to eat, either, until they free me,” he declared belligerently from his cell in the County Jail. “Mine – is a ‘poor man’s’ stand against the deep corruption that exists in the administration of justice in California.

“I represent the dwindling tribe of rugged American individuals who are willing to fight for their convictions, fight as their forefathers would have done. America is suffering now for lack of the red blood of those who rebel.”

While Evans stated emphatically that he will remain adamant in his hunger strike, Chief Jailer Clem Peoples was plotting otherwise yesterday.

“If Evans does not eat soon, we will have to resort to forcible feeding.”

Evans already has been in court once, last week when he was held to answer on the child-stealing charges after preliminary hearing before Municipal Judge Chambers.

FULL TEXT (Article 2 of 3): Los Angeles, Dec. 10 – The chief jailer said it might be crackers, but William H. W. Evans, British actor-writer, said it was his “clear conscience” that enabled him to continue his 14-day hunger strike today while looking well fed.

Evans began refusing county jail fare two weeks ago in protest against his arrest on charges of stealing his daughter, Dierdre, 6, from his divorced wife, Elizabeth.

“He looks better fed than I do. I wonder if he’s nibbling crackers, or something, at night?”

“I haven’t had anything but water,” replied Evans. “I’m in good physical condition because my conscience is clear.”

***
Full Text (Article 3 of 3): Charges of child stealing against William H. W. Evans, 29, British oil salesman [this description of his profession seems to be erroneous], were dismissed yesterday by Superior Judge Valentine when the defendant produced a written agreement between himself and Mrs. Elizabeth Evans, his divorced wife, sharing custody of their 6-year-old daughter Deidre.

Evans, arrested and returned here from Canada after he assertedly took the child last fall, represented himself in the court action.

Judge Valentine gave as his opinion that Superior Judge Heney, who granted the couple a divorce, failed to take the written agreement into account when he gave sole custody of the child to the mother.

Under terms of the agreement Mrs. Evans was to have custody of her daughter for ten months of each year, with Evans caring for the girl the remaining two months.