The central myth of MISANDRY: “the inherent non-violence of women” 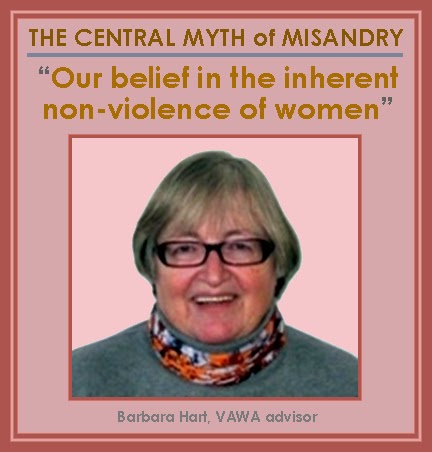 In 1986, Barbara Hart, one of the central architects of the notorious VAWA (Violence Against Women Act) expressed, in an introduction to a book on domestic violence between homosexual women, her disappointment in finding that such relationships were indeed statistically at the top of the domestic violence heap. Hart wrote candidly, describing the revelations as personally “painful,” and stating that the data “challenges our dream of a Lesbian Utopia. It contradicts our belief in the inherent non-violence of women.”*

In this brief statement this cultural Marxist, or “feminist,” delineates two important principles of the feminist plan: utopianism, a perfect socially engineered system that would serve the ideals of those who fantasize about it, and, a bedrock a priori position, a “belief,” specifically a belief that women are inherently not violent beings.

While the passage quoted makes clear that Hart had discovered both the utopian fantasy and the belief to be unwarranted – and explicitly contradicted by the facts – she nevertheless plowed forward, along with fellow travelers in the social engineering industry to construct an authoritarian agenda backed by the force of Federal power (and in many respects in violation of the Constitution of the United States), which would be signed into law by on September 13, 1994, eight years following Hart’s confession that the facts contradict the theory – or belief – or wish – or fantasy – behind the entire enterprise.

The professional term for the type of violence that women – according to the false stereotype – are supposedly incapable of is “instrumental,” referring to deliberate, premeditated action. ‘Instrumental’ is opposed to ‘expressive,’ referring to action taken only in a moment of passion or insanity. Peter Vronsky, in his 2007 book on female serial killers points out and explains this fallacy of female inability to be calculating, cold-blooded agents of violence:

“When women commit violence, the only explanations offered have been that it is either involuntary, self-defense, the result of mental illness, or hormonal imbalances inherent with female physiology: postpartum depression, premenstrual syndrome, and menopause have been included among the named culprits. Women have been perceived to be capable of committing only reactive or “expressive” violence – an uncontrollable release of pent-up rage or fear – and that they murder unwillingly and without premeditation.

‘Instrumental violence, however, murder for a purpose – political power, rape, sadistic pleasure, robbery, or some other base gratification – remains the domain of the male. After all, every male is a potential killer in the form of a warrior – and he only becomes a murderer when he misuses his innate physical and socialized capacity to kill for ignoble, immoral, and impolitic reasons. While the male is built and programmed to destroy, the female nests, creates, and nurtures. Or so the story goes.” [Peter Vronsky, Female Serial Killers: How and Why Women Become Monsters, 2009, Berkley Books, p. 6]

Here is a sample “instrumental violence” case from 1889:

FULL TEXT: Zanesville, O., Sept. 10.— Frank Amos, one of the most prominent citizens of Morgan county, was murdered at his home in the western part of this county by Mrs. Hampton, his niece, who literally hacked his face and head to pieces with a butcher knife which she had carried for weeks avowedly for that purpose. Amos was picking berries in the field with his wife when the attack was made. She and a man who was passing on the road were attracted by his cries of m ardor and reached him only in time to see him breathe his last and to see Mrs. Hampton and her daughter run away. The trouble grew out of a law suit in which the testimony of Amos threw the costs on Hampton. [“A Woman's Fury, She Hacks a Man to Pieces With a Butcher Knife.” Galveston Daily News (Tx.), Sep. 17, 1889, p. 2]

VAWA, with its enormous budget has, in subsequent decades, managed to use propaganda and behavioral conditioning programs to quite literally hypnotize the American public into accepting the “belief in inherent female non-violence,” despite the copious data contradicting the belief and an endless stream of gory news stories of vicious female-perpetrated violence.

It is with this fact in mind – the fact of mass delusion, or mass cognitive dissonance – that The Unknown History of MISANDRY approaches the question of female-perpetrated violence. Visitors to the site may be perplexed to see such a large number of stories of violent women whose victims are women, or girls, or babies of either sex. What has this to do with misandry? It has everything to do with misandry, actually. These reports of crimes of the past constitute hard evidence –  anectodal evidence which because it offers a wealth of detail gives psychological insight not afforded by statistics – that may be used to break the spell, the spell caused specifically by misandry (as well as instinctual chivalry) that causes us to overlook the truth, that causes us, like sleepwalkers, to accept and even adopt the delusions perpetrated by the feminist hoax.

This particular collection is one of several specialized categories designed to shed light on female violence in the past, in the era before cultural Marxism came to the supposed rescue of women as a class being victimized by men as a class.

It is recommended that the visitor looking into female violence against victims other than adult men take the time to browse the following categories (found in the list to the right of the screen) in particular:

Acid Queens (women who throw acid into the face of a victim with the intention of ruing the victim’s looks, but sometimes “accidentally” killing the target) 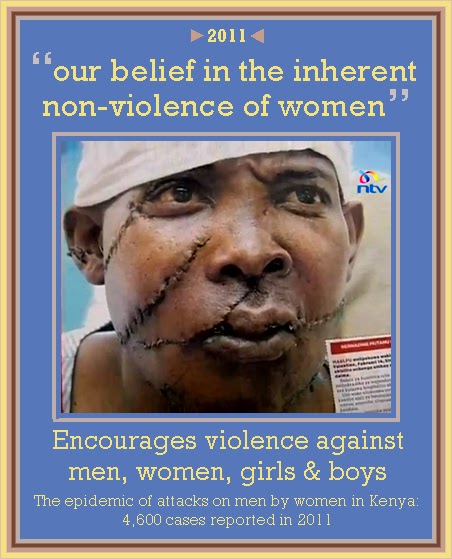 “Our belief in the inherent non-violence of women” leads to violence against men, women, girls and boys.” The epidemic of attacks on men by women in Kenya, with 4,600 cases reported in 2011 alone, provides a vivid example of just how fallacious the heavily financed international campaigns which single out one sex as blameworthy for the flaw of aggressive violence really is.