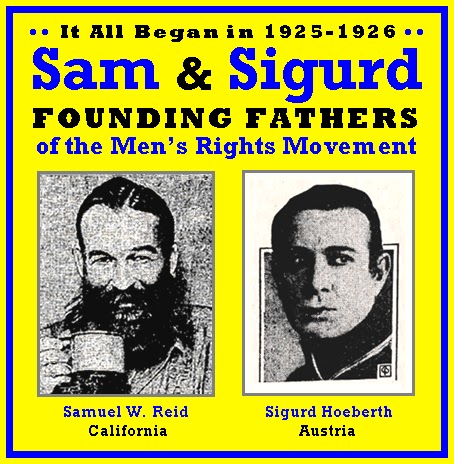 ►►► The false narrative of the history of the relations between the sexes (called “genders” by cultural Marxists) was written by liars and cowards in a deliberate effort to recondition boys and girls to accept authoritarian control. It is based on the social engineering theory of social constructionists. It is time We the People, honest men and women, reclaim our own history and replace the misandric fairy tale of “herstory” with the actual and well-documented truth.

“Honest history is the weapon of freedom.” – Arthur Schlesinger Jr.

Note: Yes, Ernest Belfort Bax did come before, but Sam & Sigurd were activists rather than just polemicists. This is why they are more accurately described as the founders than earlier figures who wrote about men’s rights yet did not take action that inspired others to rally and organize.

►►► Be assured, the university system and the mainstream media will never, ever, assist us in replacing the misandric phony orthodox historical narrative with the truth. It is up to us to do it ourselves, regardless of the resistance we will face.

If we do not do it will never be done. But it needs to be done.

► Send this post out to the world. Be relentless. Do it constantly over a long period of time. Reach everyone.

► Write a song about Sam or Sigurd, or both. Record it. Put it out there.

►  Write a blog post or do a YouTube video about them. What does it feel like to learn that your legacy has been denied you by your schools and the media by blacklisting the history of the long struggle against misandry?

►  Make their pictures known. These images are icons of our struggle for freedom.

►  Teach these stories to your children. Ask them to make pictures and to write something. Post these children’s pictures and writings online.