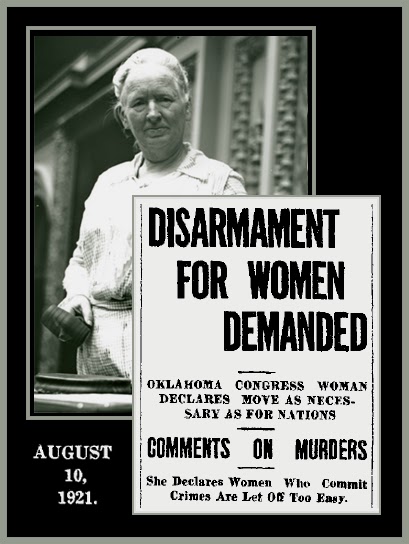 NOTE: “Herstory” is collapsing. The fraudulent narrative of the history of the relations of the sexes (that has been constantly pounded into our heads by propagandists since we were children) will not hold up in the face of the evidence being uncovered by activists who are devoting untold hours to show the truth of the past in an effort to wake people up from their hypnotized state. No amount of blacklisting, overt censorship, de facto censorship, hiring quotas, heavily-funded propaganda, Unesco educational protocols promoted by the Dept. of Ed., anti-Constitutional regulations, threats of prosecution for First Amendment-protected free speech will prevent the orthodox narrative from crumbling before our eyes.

FULL TEXT:  Washington, Aug. 10—”Compulsory disarmament of women” was suggested today by Alice Robertson, Oklahoma’s lady congressman. With murders by women on the increase, she declared it as necessary as the disarmament of nations.

‘“The lady from Oklahoma” had been asked to comment on the shocking and growing tendency of her sex to kill off the male population.

“The women talk so much about disarmament – well, why don’t they disarm’’ she demanded. “Why don’t they begin it by disarming women.”

When informed a movement was under way to have her named as a woman member of the American delegation to the president’s disarmament conference, she said:

Why should I be? There is no place for women.

Speaking her mind on women murderers, suffragists and other females of the species, she said:

“Men are not so bad. Women declare them cruel and unjust but they are not. It is to be remembered that men who are bad had women as their mothers.”

“But to disarm only the women – that would be unjust,” it was suggested.

“There should be compulsory disarmament of men too – of course, the men should be included,” said Miss Alice. 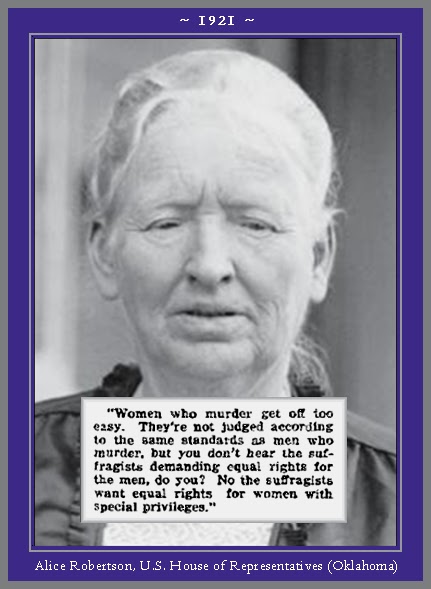