Regarding “Why Being a Good Man is Not a Feminist Issue” 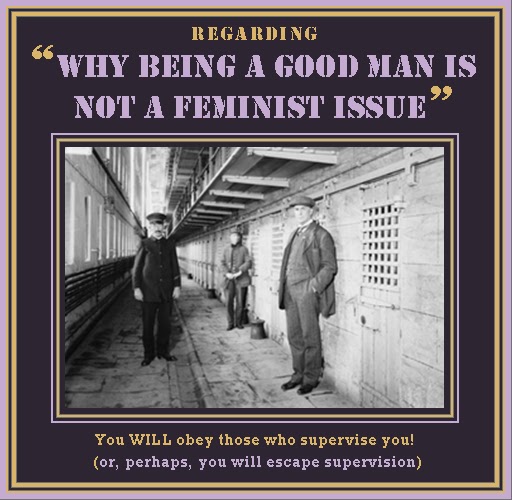 Here is a comment on this debate by St. Estephe (The Unknown History of MISANDRY):

People who are not social constructionists do not believe they should be monitored and supervised by social constructionists, conversely social constructionists will make every effort to monitor and supervise everyone. The marxist notion of “male gender” and “female gender” is extremely dissimilar to the natural (existential) reality of there being a “male sex” and “female sex.” In order to escape from the supervision of those who want to control us, we must come to the realization that even the use the term “gender” in our own speech and writing – when we mean to refer to the sexes – is undermining us. Freedom is costly. The orthodoxy, regardless of its nature in any given region or historical period, will not facilitate freedom. Here and now, political correctness (social control) is the orthodoxy, employed by government and financial powers (“corporations” and the finance above them) in perfect harmony. (June 30, 2012)

***
A good introduction to The Unknown History of MISANDRY is the post, “A Woman’s Voice”