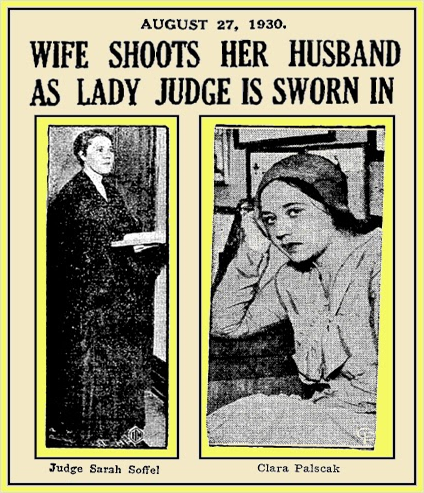 One of the three bullets fired wife, lodged in Palscak’s abdomen. He was reported in a critical condition.

Palscak was in court today on complaint by his wife and his case was to have been the first called by Judge Soffel after taking her oath of office.

Mrs. Palscak, witnesses say, walked into the court’s office while the judicial ceremonies were being carried on in another room of the court house and asked Miss Bess Parkin, attendant, for permission to speak with her husband.

After a brief conversation the woman was seen to pull a pistol from her purse and fired three times at Palscak. 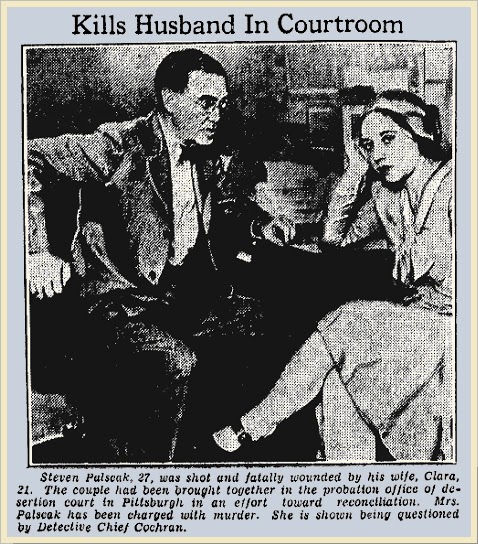 The woman raged and fought with a half dozen officers who rushed in and was finally led to the county detective bureau, sobbing “he wouldn't come back to me.”

The couple had been married only recently and had separated once and been reconciled. A few days ago, however, Palscak refused to return to his wife.

Judge Soffel was being sworn in as county judge of Allegheny County following her recent appointment by Governor John S. Fisher. She is the first woman ever to be named to the bench in the Commonwealth. 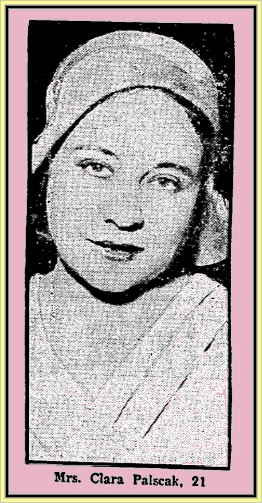 PHOTO CAPTION: Appearing in a Pittsburgh court against her estranged husband, Steve Palscak, 24, Clara Palscak; 21, threw the courtroom into a panic when she whipped out a revolver and possibly mortally wounded him. The woman said the gun accidentally discharged when she pulled it from her purse. The case was the first listed for Judge Sarah N. Soffel, just sworn in as Pennsylvania's first woman jurist. 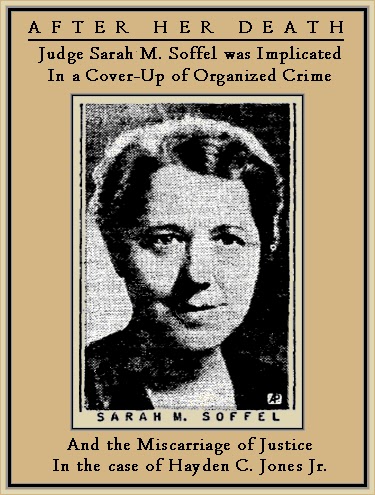 FULL TEXT (Article 3 of 4): Hellertown, Pa. – Hayden C. Jones Jr. is asking for $1 million from the State of Pennsylvania because he ii claims his wrongful conviction in 1949 on morals charges cost him 19 years of freedom, his health and the lives of his wife and three children.

Jones says all he has ever received was $7 and a train ticket home from prison, and now only the possibility of a formal apology from the Board of Pardons.

Jones was convicted of sodomy and assault charges in 1949 in Allegheny County after five boys between the ages of 11 and 14 testified against him. In his suit, filed in Commonwealth Court Jones said he was released from prison in 1968 after one of the youths who testified against him admitted he had lied.

“I was convicted on morals charges because I wouldn’t get involved in a shakedown,” Jones said at a retreat here where he is resting. “Most silly thing I’ve ever heard, they
asked for $300.”

Jones explained he was on 10 day leave from the Army at the time and had gone to Pittsburgh. “I went to a movie. The way they do it is that the police bring boys into the movie and they sit on each side of you. The boys put their hands on your legs and then you’re arrested on morals charges,” Jones said.


He was sentenced to 15 to 25 years imprisonment by Judge Sarah Soffel. A week later he was called back and resentenced by the same judge to 15 to 30 years. His attorney, David Spirit, said no reason was ever given for the resentencing. Judge Soffel is now dead [she remained on the bench until 1962]. Jones was sent to Western State Penitentiary at Pittsburgh then transferred to Eastern State Penitentiary and finally released in 1968 from Huntingdon Correction Institution. While in prison he testified before a Pittsburgh grand jury investigating an alleged shakedown ring.

“That never got anywhere,” Jones said, adding that Sarah Soffel was the jury’s presiding judge.

Jones claimed he developed emphysema, asthma and a weak heart in prison after spending “five years in solitary at one time.” In 1965 while he was incarcerated at Eastern Penitentiary, his wife and three children were killed in an automobile accident en route to see him at the prison.

“I didn’t know about their deaths until two years later,” Jones said. “They keep it from you in prison. Maybe to keep you from going over the wall. In those days the wardens were pretty bad.” According to Spirit, Jones was in solitary confinement at the time of his family’s deaths and “nobody ever notified him.”

During that time, according to the suit, the five youths signed affidavits admitting they perjured testimony under coercion by police. Spirit said the affidavits never reached the court. Jones said he did not learn of the affidavits until 12 years later.

“I was in prison taking a shower and I saw this boy staring at me,” he said. “I got all hogtied and he asked me, ‘Don’t you know who I am? I’m one of the boys that framed you. I was forced to lie against you.” The following day Jones was brought before Allegheny Court President Judge Henry Ellenbogan who ordered the sentence vacated and the conviction overturned. 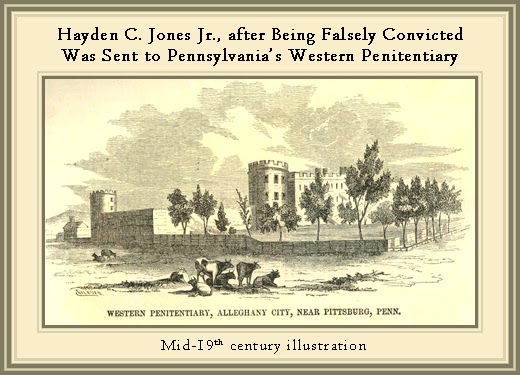 Since his release in 1968, three bills were introduced in the Pennsylvania Legislature to compensate Jones for the years he spent in prison.” None of the bills passed.

Jones recently received a letter from Gov. Milton J. Shapp advising him the case has been referred to the Board of Pardons. But Jones wants more than just a formal letter of apology.

He filed the suit against three state officials and 11 state Senators and Representatives in an effort to receive compensation for his 18 years of “unlawful and wrongful imprisonment.” Jones, who now resides in Philadelphia, turned 51 last May. He thinks his reward is long overdue.

***
FULL TEXT (Article 4 of 4): Harrisburg – Commonwealth Court has rejected an Allegheny County man’s contention that the state must pay him for wrongfully keeping him in prison for 19 years.

Hayden C. Jones Jr., 52, of McKeesport, charged he was falsely imprisoned. He had asked the court to force either state officials or the legislature to pay him an unspecified amount of money.

Jones was sent to prison in 1949 after his conviction for running a crime school for youths and for morals offenses.

He was released in 1968 when three of the five boys who had testified against him disclosed they were told by authorities to the seven-judge panel said the state is protected from such suits by the doctrine of sovereign immunity.

“Under the current status of the law, the commonwealth’s allegedly wrongful incarceration of plaintiff, though abjectly distasteful, offers plaintiff no cognizable relief,” the court said.

Besides, the court said, it has no power to force the legislature to pass a measure compensating Jones.


Other cases in which a wife shot a husband in the court house:

Email ThisBlogThis!Share to TwitterShare to FacebookShare to Pinterest
Labels: Husband-Killing, Other Crimes