Patriarchal societies treat women as slaves. Just ask Allie Patterson, if you can find her - 1906 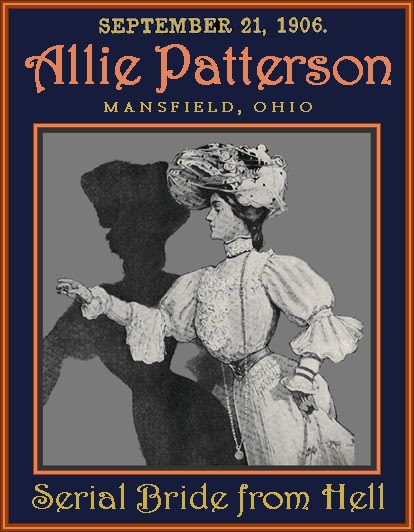 FULL TEXT: The journal entry was made in the probate court case [in Mansfield, Ohio] of Allie Patterson vs. William G. Patterson, which came on for hearing yesterday before Judge Bricker, who granted the defendant a divorce on his answer and cross petition. The plaintiff failed to appear. It was learned from the defendant’s attorney, C. H. Workman, that this is the fourth husband who has secured a divorce from her. At the hearing yesterday Henry Boader, her first husband, was present and testified that she tried to shoot him a couple of times, besides trying to poison him before he got a divorce. Plaintiff and Mr. Patterson were married only last December and it appears that she told him that her first husband died 18 years ago and that she had never been married except once before. July 14 last Mrs. Patterson brought action against Mr. Patterson for divorce, alleging various things against him, which the court by the testimony of the witness found to be untrue. She is debarred from an interest in defendant’s property.