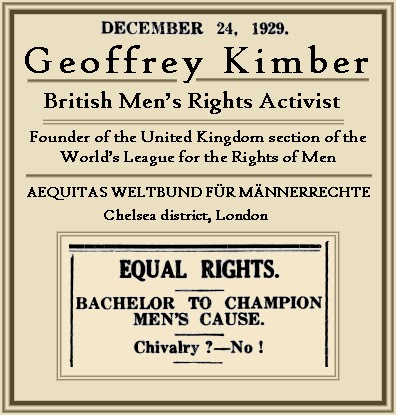 Following are newspaper articles discussing the British branch of the international men’s rights organization founded in (April?) 1926 and whose headquarters were located in Vienna: Aequitas Weltbund für Männerrechte. 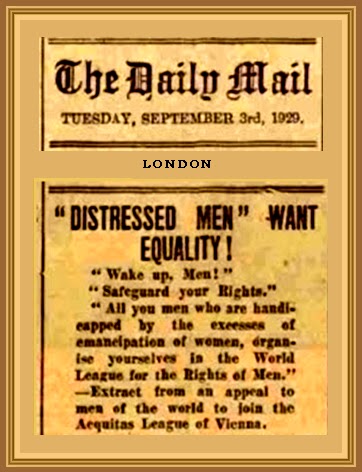 “Wake up, Men!”
“Safeguard your Rights.”
“All you men who are handicapped by the excesses of emancipation of women, organize yourselves in the World League for the Rights of Men.”
--Extract from an appeal to men of the world to join the Aequitas League of Vienna.

As a recent divorce case in America it was reported that the wife, who was suing for divorce and alimony, was already receiving substantial sums by way of alimony from her two former husbands! The sums were such as we should consider a respectable fortune in this country, and certainly enough to keep her in luxurious comfort for the rest of her life. She had, in fact, done well in the marriage market and solidified her holdings at the top of the “boom”! not content, she was asking for more. It is a curious example, perhaps, but one that shows how the law of the country works for the benefit of the woman. In more ways than one does the law of America – and of this country for that matter – favour the wife in married people’s relationships. Generally, it is incumbent upon the husband to maintain his wife after they have separated, and where the husband is to blame there is justice in this attitude.But how often is unhappy marriage the result of unsuitable temperaments? In such as case, husband and wife, for their unwise choice, are equally to blame for the clash, and the separation when it comes, but the husband has still to pay alimony. Is that the just attitude? It prompts a query that will shock most people in this country, and cause apoplexy almost to those staunch old folk who regard our marriage customs and laws as the unalterable pillar of life itself. Are our standards wrong?  Are they based on a wrong conception of what marriage should be? Instead of being in the van of progress, an example for the whole world, in reality are we living in the Middle Ages of blinded vision and stilted outlook? Dreiser, in his recent book on Russia, which country he visited some months ago, devoted a most interesting section to the marriage customs of that country. There, we are given to understand, men and women really are equal. They get equal pay for equal work, equal holidays, women are expected to work alongside men and serve in the Red Army. What is of supreme interest to the subject under discussion, however, is their marriage laws. When a wife, who generally is an outside worker employing a domestic to do her housework, is undergoing a confinement the State sees that she gets the best attention possible, and pays her well, for the Soviet realizes that in the children lies the hope of the country. That is a system that in theory many would  claim to be vastly advanced to ours. The drawback is that officially the child is regarded more as State property than that of the parents. But, “’till death to us part” has no place in the new Soviet order. Either party in Russia can secure divorce quicker than purchasing a railway ticket. All that is necessary is for the complaining party to go to the local Soviet office, make the complaint, and get his or her ticket stamped “Single” again! Then, the children being the joint responsibility of the parents, and each having equal chance to work for equal pay, the parents have to keep themselves and pay equally towards the upkeep of the children! that, according to Dreiser, is the ideal way in “idealist practical” Russia, and he finds such in the system to commend. We do not comment, or much less approve, or much less approve, the virtues or drawbacks of the Soviet way of doing things. We give it to show the extreme contrast between our views of marital relationships and alimony and the views in a country in an experimental stage, where the “ideal” system is being sought after. [Note: Dreiser’s account did not reveal the absurd excesses of female privileges. For a look at how the Soviet system really worked in this period, see "A Dictatorship of the Eternal Woman Has Been Declared": TheSoviet Alimony Racket – 1927”]

Now in all this there is a grain of commonsense, and matter of sufficient interest to men and women to start a sex war blazing, and if the promoters of the League had stopped at that one could have admired them for their zeal, even if one could not agree with their opinion. The appeal, however, ends up with an exhortation to men to attend this maating at Vienna, and concludes with the lines: --

“No passport visa fees and reduced fares to Austria!”

“All facilities for a comfortable stay in  Austria!”

In that the real object of this campaign? Is it just a piece of clever “Visit-our-country-for-your-holidays” propaganda? Ironically enough, would the Austrians be glad if the “distressed” men were also to take their wives as a further contribution towards the tourist profit campaign? It might not be so, but it sounds suspiciously like it.

FULL TEXT (Article 2 of 3): A United Kingdom section of the “World’s League for the Rights of Men” [Aequitas Weltbund für Männerrechte, Vienna] has been formed and letters have been sent to the three party leaders drawing attention to various “inhustices” which the League considers men are subject to.

Among the aims of the League, branches which are established in Vienna, Berlin, Munich, and other Continental centres, is the form of law  relating to divorce. It is urged, for instance, that the circumstances of a divorced woman should revert to her own nationality and abandon the name and title of the husband from who she is divorced.

In matters of education the League asks that boys in State schools over seven years of age shall be taught only by men teachers; that children should be taught sufficient of the subject of anatomy to safeguard their own health; that instruction on “sex matters and their perplexities” should be given in schools by qualified and competent instructors; and that there should also be instruction in the simple laws of the country.

“We are not an ‘anti-feminist’ League,” said the general organizing secretary, Mr. Geoffrey Kimber. “We are simply ‘anti-ultra-feminist.’ We are against the masculine woman who thinks she can take any man’s job, no matter what it is, and do it better than he can.”

NOTE: Following is a article written in a sardonic tone as was common for many English language reports on the early men’s rights activism efforts.

FULL TEXT (Article 3 of 3): Women of London, let me introduce you to M. Geoffrey Kimber, the bachelor who is going to protect all us downtrodden men from your subtle and enslaving wiles (writes a Downtrodden Man in a home paper).

A tough job, you say? Then all the more honour to Mr. Kimber, who by starting a United Kingdom section of the World’s League for Men’s Rights [Aequitas Weltbund für Männerrechte, Vienna] has taken on womeankind single-handed, without a single tremor of fear!

What a hero is Mr. Kimber.

And how lucky for him that he hasn’t got to tell a wife what he had done!

I had a long talk with Mr. Kimber at his Chelsea headquarters, and was delighted to hear that women will not dominate men if he can help it, and that he is going to chop off all the tentacles that women have been stretching out to seize the privileges of Man, the Master.

In fact his grey-blue eyes positively flashed as he passed his hand through his bushy, fair hair and said:

“We of the League are definitely against the ultra-masculine woman who cuts her hair short and imitates a man. Do you as a man realize how many of them there are about?”

He re-arranged a stack of propaganda on his table. “We have got to fight,” he said, with the utmost firmness. “And my goodness, we are up against something.

“There are four or five high organizations for women, and not one for men. Women want everything changed in their favour. What has been done to help men?

“Nothing,” I answered, “only please don’t quote me as saying so.”

“But what do women say? They say: ‘Some fool will give us a seat,’ and get on a crowded bus.”

“Woman,” he said, “not only wants to mother the race, she wants to manage it as well.

“I am afraid men will deteriorate if things go an  as they are. They will; get weak and spineless, while women will become masculine.

Why – tell me this, as a man – why do we allow women to teach boys in schools when they are older then seven?”

“The boys become feminine,” he said.

Mr. Kimber declared sorrowfully that already women were forgetting how to cook.

“But don’t imagine that we are out to smash women altogether,” he said. “Are we against women going into the professions, even though we do prefer the womanly woman? Certainly not. We’re not fools.

“We see the necessity for women policemen. But we are out against the sort of educational woman who teaches girls to go in for so much sport. They are a real menace.

“The ordinary London girl is not so dangerous. She simply wants a good time. She likes to wear nice frocks, and go to theatres. But as for the others …”

Mr. Kimber, who has given up his work as a teacher to fight the cause of downtrodden Man, and has begun by sending a letter to the three Party leaders about it, is not such a confirmed bachelor as you might think.

“I shall probably get married myself,” he said.

***
For the main article on this organization, see: