The Badger Game: A Con Game Directed Against Males 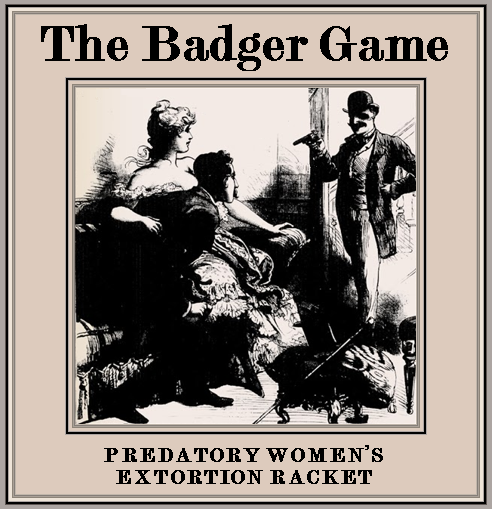 Wikipedia: The badger game is an extortion scheme, often perpetrated on married men, in which the victim or "mark" is tricked into a compromising position to make him vulnerable to blackmail.

There are two competing explanations for the origin of the term badger game. One explanation is that the term originated in the practice of badger baiting. Another says that it derives its name from the state of Wisconsin (the Badger State), where the con allegedly either originated or was popularized.

This con has been around since at least the early 19th century. There are several variations of the con; in the most typical form an attractive woman approaches a man, preferably a lonely, married man of some financial means from out of town, and entices him to a private place with the intent of maneuvering him into a compromising position, usually involving some sort of sexual act. Afterward an accomplice presents the victim with photographs, video, or similar evidence, and threatens to expose him unless blackmail money is paid.

The woman may also claim that the sexual encounter was non-consensual and threaten the victim with a rape charge. It can also involve such things as the threat of a sexual harassment charge which may endanger the victim's career. 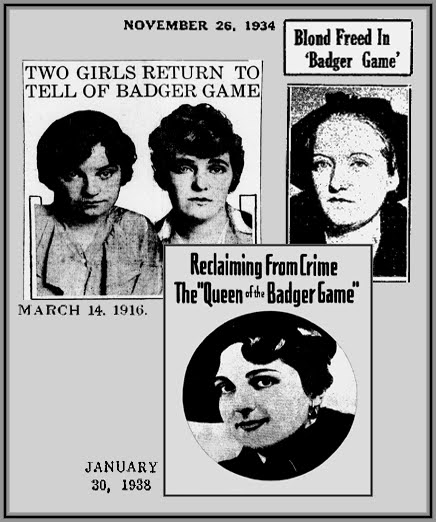 In the days before photography or video, the accomplice would usually burst into the room during the act, claiming to be the woman's husband, father, older brother, etc., and demand justice. The con was particularly effective in the 19th and earlier 20th century when the social repercussions of adultery were much greater. A famous person known to have been victimized by the scheme was Alexander Hamilton, whose adulterous affair with Maria Reynolds was used by her husband to extort money and information from him.

Variants of the con involve luring the mark with homosexual acts, underage girls, child pornography, bizarre sexual fetishes, or other activities deemed to have a particular social stigma.

Another form involves accusations of professional misconduct. In an example of this form of the con, a "sick" woman would visit a physician, describing symptoms that required her to disrobe for the examination, require the doctor to examine the genitals, or ensure similar scrutiny from the doctor. During the examination an "outraged husband" or "outraged father" would enter the room and accuse the doctor of deviant misconduct. The "sick" woman, who is of course part of the con, takes the side of her accomplice and threatens the doctor with criminal charges or a lawsuit. This form of the badger game was first widely publicized in an article in the August 25, 1930 edition of Time magazine.

Non-sexual versions of this con also exist, particularly among ethnic or religious groups with strong social taboos; for example coercing a Mormon to gamble or drink alcohol.

The badger game has been featured as a plot device in numerous books, movies and television shows.

Here is an explanation of the Badger Game from 1911

The so-called “badger game" is usually operated by a man and a woman. The woman lures a victim, a man who had money, to a room. Here the woman attempts to compromise the victim. At a crucial moment she signals to her male accomplice, who is stationed outside the room. The latter rushes in, plays the part of an outraged husband or brother, and threatens to kill the victim, or else turn him over to the police. A compromise is suggested; the victim is usually only too glad to pay a few hundred or even a few thousand dollars to escape.

The most notorious case of this kind was that worked by Fay Moore and her husband Martin Malon, a rich New York hotel owner, was the victim. He paid $7,500 in cash to escape from Fay Moore's room. Later he complained to the police and Moore was sentenced to a long term in Sing Sing although his wife escaped punishment.

The crime is called the "badger game" because in England it is the custom to hunt the badger, an animal, with trained dogs, thus giving the badger no chance to escape with its life. 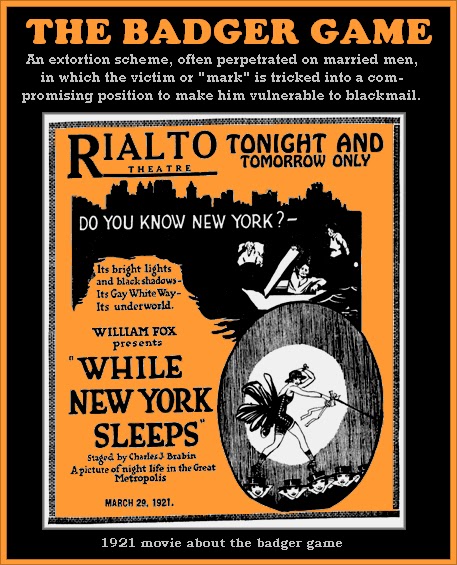 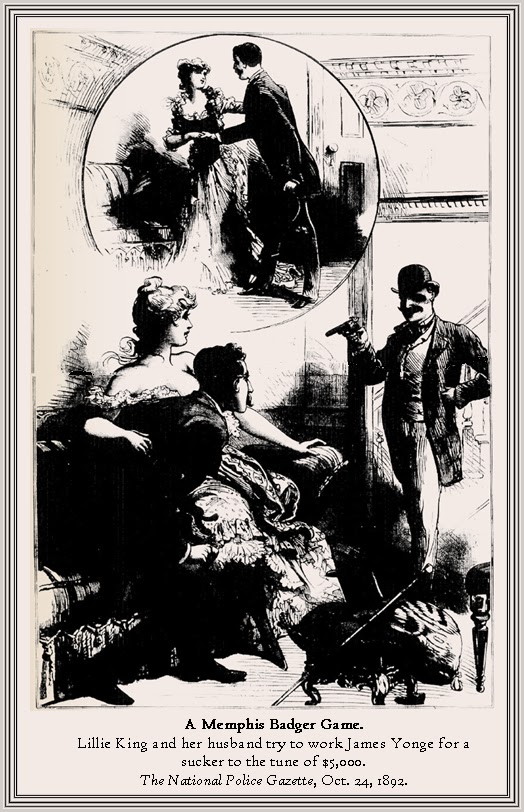 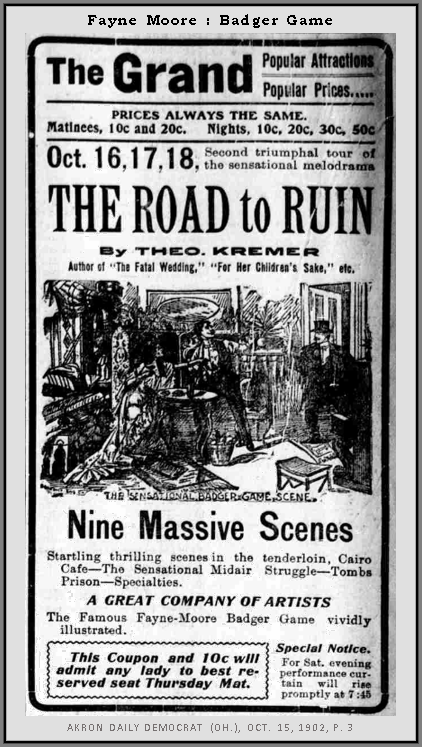 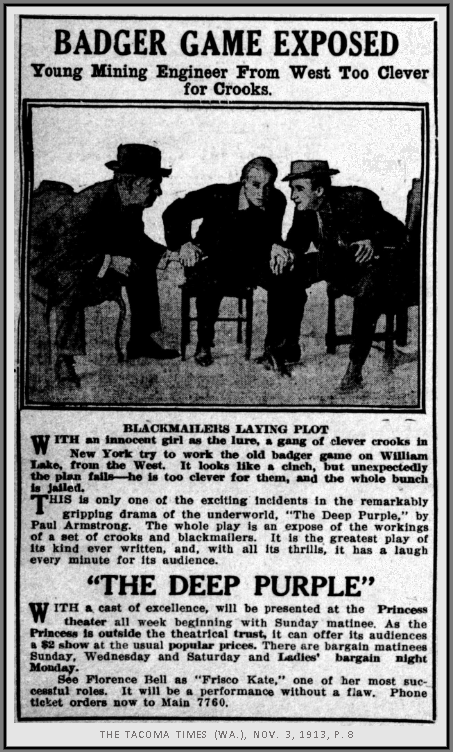 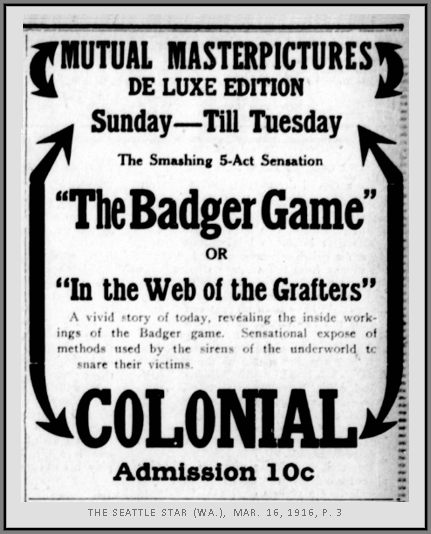 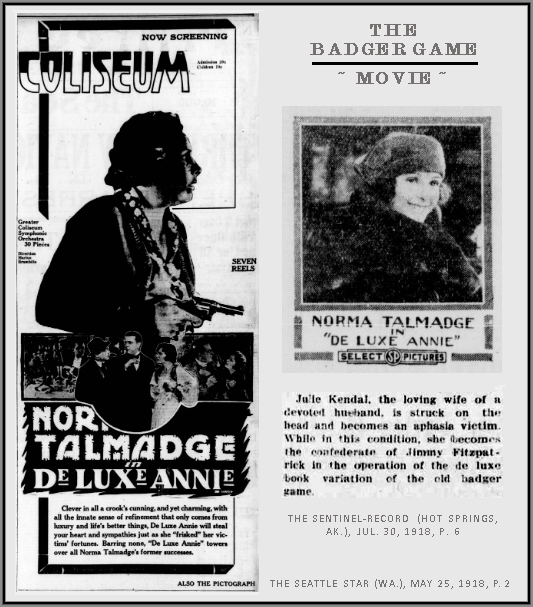 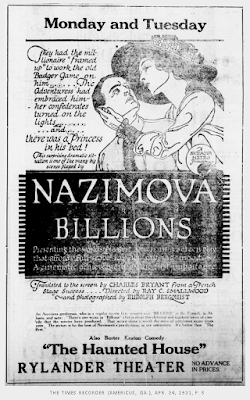 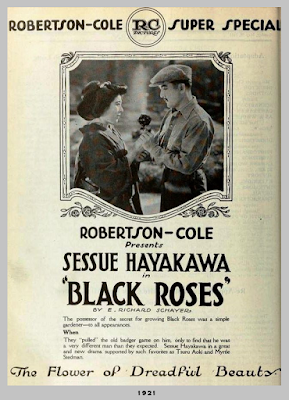 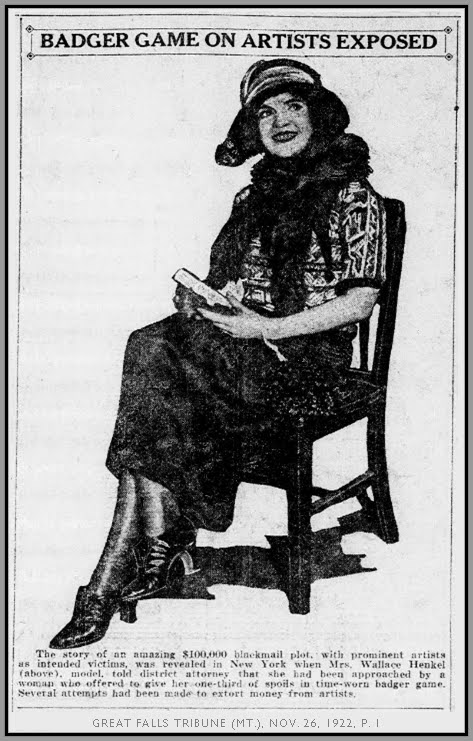 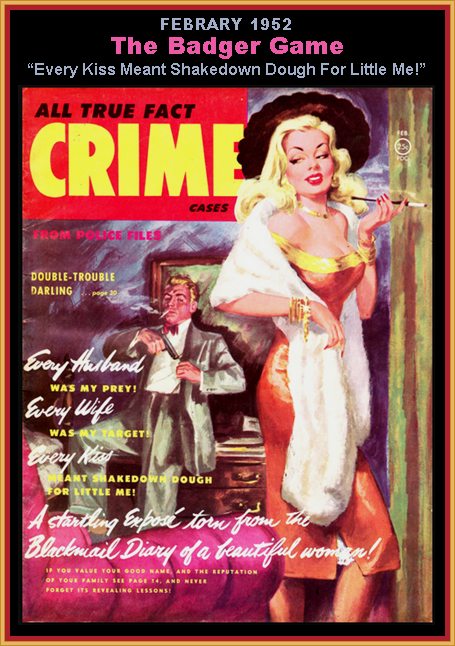 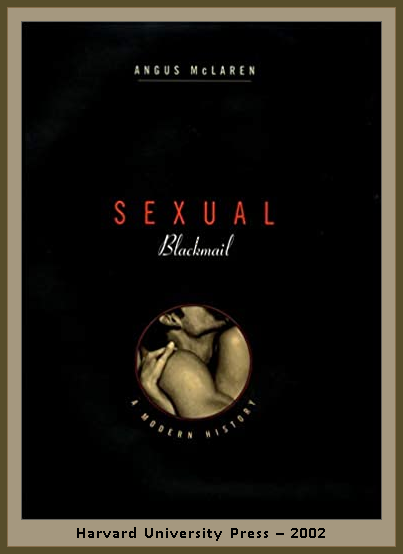