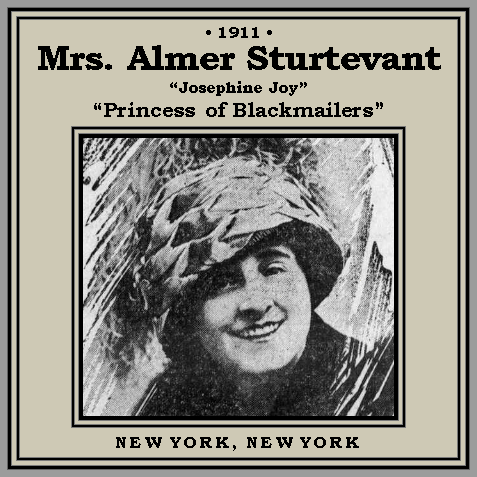 FULL TEXT: PASSAIC, July 20. — Mrs. Almer Sturtevant is known to the stage as Josephine Joy. Perhaps Mrs. Sturtevant chose this name for its appropriateness as an interpretation for her own theory of life. At any rate Mrs. Sturtevant believes in getting all the joy out of life that is possible. Recently she came into public notice through Mrs. Helen Jenkins, who is going before the grand Jury this week to testify in the famous smuggling cue involving Nathan Allen. As soon as Mrs. Jenkins's case became public Mrs. Sturtevant began to write to her asking for an interview. When Mrs. Jenkins granted her the interview she was accompanied by government agents. She says that Mrs. Sturtevant told her she believed they could do business together. Her idea of business as Mrs. Jenkins understood it was to levy contributions on "rich old fools." Mrs. Sturtevant has a suit now pending against one "rich old fool" in Erie. Pa.

FULL TEXT: PITTSBURG, Pa.. Dec. 6. – RULES of the Game: the Modern Badger Code,” might be the title of several startling depositions that were heard before Federal  Judge Charles P. Orr in the $25,000 alienation suit brought by Alma [sic] V. Sturtevant, of Passaic, X. J., against W. B. Sterling, of Erie, Pa.

Josephine Joy, as she 's known on Broadway, according to the testimony taken from New York witnesses, styled herself the “Princess of Blackmailers. She is the actress wife of Sturtevant and, according to the depositions, she practised the badger game from the time she entered the Boston Conservatory of Music as a student.

The plaintiff’s case collapsed with the filing of those depositions, and counsel for Sturtevant literally “threw up the sponge,” Judge Orr found judgment in favor of Sterling, against whom Sturtevant had filed damaging charges, detailing alleged intimacies with his wife.

The depositions which were taken before G. H. Brevlllier, a New York notary, reeks with the tales of an adventuress. How a Boston banker was mulcted for a big sum by the stage beauty is but one of the many features set forth in the depositions of Van Ness Harwood, of New York. This banker, Estabrook, or Esterbrook by name, was the victim to the extent of a large sum of money.

Others who tiled depositions were Richard Parr, deputy surveyor of the port of New York; Helen Dwelle Jenkins. who was named some months ago in the sensational smuggling scandal, and A. S. Phillips, of New York. It was to Messrs. Harwood and Phillips that the woman is said to have boasted of her wiles as a "badger'' artist and blackmailer. The deposition of Purr contained nothing about blackmail, but that of Mrs. Jenkins told of Josephine Joy's efforts to secure her cooperation in landing "live ones” who "fall heavily.

Mrs. Jenkins is brought into the case through Josephine's alleged efforts to “make a touch” for $2,500, which she wanted to use in prosecuting the suit. Mr. Harwood's deposition follows in part:

“She said that, considering her age. 25, she was the most expert blackmailer. badger worker and confidence woman in the country. She said that her husband was a tool and cited the Sterling case. She said if she could get the loan she would give Mrs. Jenkins 50 per cent of whatever money she could mulct Mr. Sterling out of." 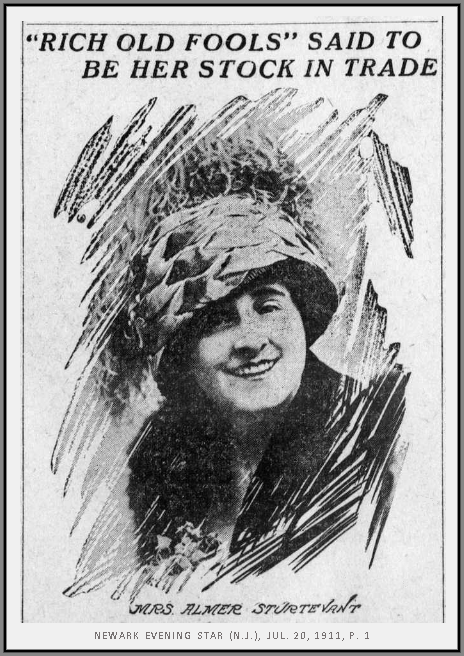 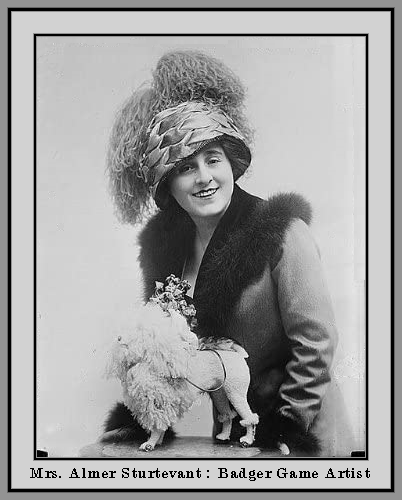