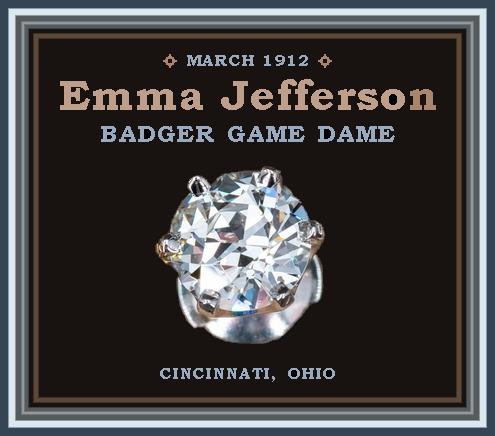 FULL TEXT: Cincinnati, Ohio, March 20. – Charles W. Meyer, who for several years has been stage manager of the Lyceum Theatre in Cincinnati, was murdered early this morning near 634 Barr street, where his body was discovered at 3 A. M.

Whether Meyer was killed in the house at that number or in the alley nearby has not yet been determined by the police.

That the failure of the badger game to work on him was the direct cause of his death is the belief of the Police Department. They have arrested Robert Barnes and Emma Jefferson, both colored. They are holding Jim Lyle, Arthur William and Florence Williams as witnesses.

The couple under arrest deny that they tried the badger game on Meyer. They declare that the killing followed the discovery by Barnes of Meyer in their room. It is said that after he was killed in the loom the couple clothed his body, dragged it to the adjoining property and to tossed it on the pavement there.

According to the statement of the Jefferson woman, James Hamilton brought Meyer to her room. The police found him and he said he took Meyer the Williams home early in the morning, that they met the Jefferson woman here, and that Meyer took her home.

Barnes told several stories to-day admitted that and admitted that he struck Meyer, but that the latter jumped over the banister and fell to his death. When Meyer with found three large diamond rings and a diamond stud were found in his pockets. His divorced wife lives in Cincinnati.