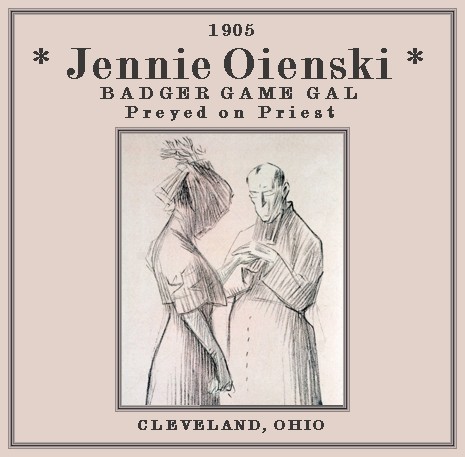 FULL TEXT: Cleveland, O., Aug. 26. — On the statement made to the police by Rev. Benedict Rosinski, a Catholic priest of St. Stanislaus church, that he had been held prisoner for twenty-four hours, without food or water and forced to sign two notes for $500 each and two checks for like amounts, which had been since cashed, besides being robbed of $30 and some jewelry, two men and a woman were arrested today.

The woman is said to have lured the priest to her room in Cedar avenue by pretending to be ill and in need of spiritual consolation, and the men are said to have rushed in on them, and held Rev. Rosinski prisoner until he had satisfied their demands.

Rev. Rosinski says that he received two telephone messages on Thursday, urging him to call on Jennie Oienski of 389 Cedar avenue. He had been there but a few moments when Julian Tuszynski rushed in and declaring himself to be the woman’s fiancee, demanded that the priest give up S4000 for alienating her affections.

With Tuszynski was Leo Czechowski, both of whom, according to Rev. Rosin ski’s story, started at once to beat him and tear his clothes from his back, when he refused to give them any money.

His jewelry was taken from him as well as $30 and he was detained as a prisoner for twenty-four hours without food or drink until he consented to sign the checks and notes.

These checks were cashed by Tuszynski and the woman, it is said. Rev. Rosinski notified the police and the trio was arrested.

The two notes and $879 were found under a carpet in the woman’s room. They are charged with robbery and were bound over to the grand jury.