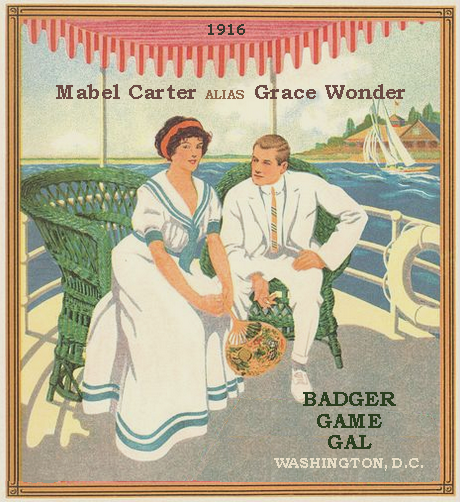 FULL TEXT: Mabel Carter, alias Grace Wonder, twenty years old, whose home is a few miles from Birmingham, Ala., was arrested in this city this morning by Detective Frank Baur and two detectives from Birmingham. She is wanted in that city as an alleged fugitive from justice, it being charged that she escaped from the jurisdiction of the court while awaiting sentence.

The young woman and a male companion were arrested on a charge of operating what the police term the "badger" game. It is stated that they were convicted and the man was given a sentence of three years, and it was just before the woman was due to appear before the court for sentence, it is stated, that she jumped from a window and escaped.

Leaving Birmingham she went to Canada, and she expressed sorrow for leaving there and coming to this city. She reached here four weeks ago. Found accommodations at a house on 8th street north west and was given employment as a waitress in a dining room on Pennsylvania avenue, from where she tried to make her escape when the detectives arrested her. She will be taken to Birmingham tonight.

[“Woman Held Here As Fugitive From Justice - Charged With Operating at Birmingham What the Police Term the "Badger" Game.” The Evening Start (Washington, D.C.), Jun. 1, 1916, p. 12]