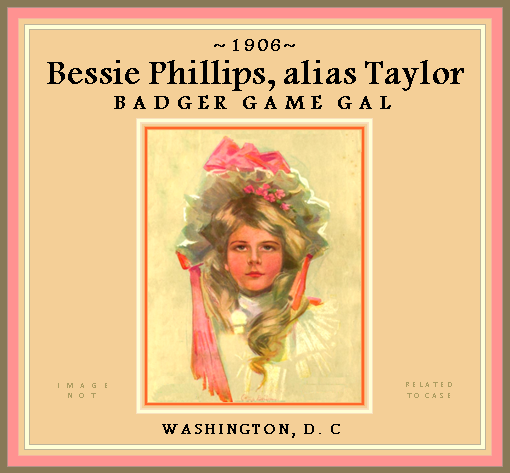 FULL TEXT: Charges of operating the time worn “badger game” were made in the Police Court yesterday against Bessie Philips Taylor and her husband, J. Edward Philips who were held by Judge Mulloway for grand on a charge of larceny. Neither were able to furnish the bond. They were remanded to jail.

James L. Snow, of Richmond, Va., a car agent for the Chesapeake and Ohio railroad was the complainant against the couple He alleged that they robbed him of a diamond set stick pin and $16 in cash while he was in a hotel.

Snow said he was on his way to Detroit and stopped in Washington for a day or two while strolling along Pennsylvania avenue he met a handsome voting woman and they went in a hotel where drinks were served.

While he and the woman were chatting the door How open and very angry looking man shot into the center of the room shouting, “By heaven you’re here with my wife and I’m going to have satisfaction.”

Mr. Snow says he arose to give the intruder a sound thrashing but the unwelcome visitor preferred to argue the matter. During the argument Mr. Snow say she removed his collar and scarf placing his diamond pin in it Wizen he put the scarf on again he alleges the pin was missing.

The woman is said to have made a foil confession. She said she met Mr. Snow on two occasions. The first time he was unable to take care of his jewelry and he gave it to her to keep according to her story. She took the jewelry home and her husband placed the ring on one of his fingers and the within his pocket. They went to a restaurant where the husband displayed the jewelry. She then got the jewelry from her husband and they walked to the hotel in which she had previously met Snow.

The complainant and the woman engaged a room. The husband ascertained from the clerk the location of the apartment and immediately went there to create a scene according to Prosecutor Ralpa Given who appeared for the Government.