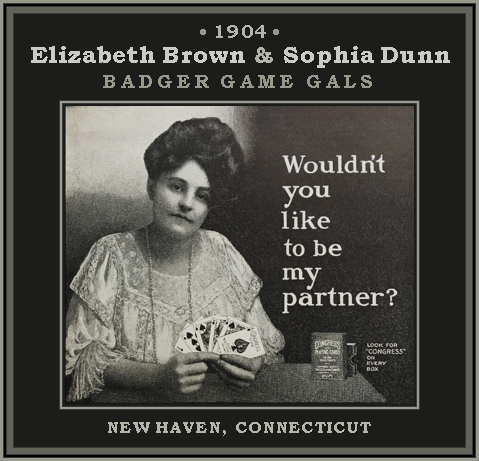 FULL TEXT: Eli Carpenter, colored, who was arrested in 1881 by Captain Cowles for burglary, was arrested in Stamford Saturday and held for Detectives Frey and McGrath, who went after him and brought him to this city. He is held for his connection with the alleged badger game in Webster street a week ago Saturday night.

Carpenter was sent to prison in 1881 for burglary, and has since been arrested for other offences. It is how alleged that he took the $25 gold watch and a pistol that were taken from the victim, A. Mongillo.

Elizabeth Brown, also said to be concerned in the badger game, was found by the detectives in Greenwich and brought here.

The Palmer woman has been living with Carpenter at his house, 783 Webster street, where the robbery occurred. She is a white woman and has an additional charge of the theft of address suit case lodged against her, besides that of theft from person. Carpenter is charged with theft. The cases of all of the accused come before the city court this morning.

FULL TEXT: John Johnson (colored), an instructor of the Yale Glee club; Harry Mitchell, Henry R. Thomas, Ellsworth Goddette and Thomas Wallace told in the city court yesterday their connection with the badger game worked by Eli Carpenter and Mrs. Sophia Dunn ,and were discharged by Judge Tyner, Carpenter and the Dunn woman were bound over to the next term of the superior court under $1,000 bonds.

The victim, Joseph Mongillo, who lost $25, a revolver and a watch, testified that he lived at 256 Hamilton street, and that he met the woman on Oak street.

Johnson pawned the watch for Carpenter, and feared that if he was held in jail he would be unable to get his friend, Hamilton Baxter, of Vanderbilt hall, into shape for the concert in Brooklyn December 19. He is known to the students as Jack Johnson and says that he has an Italian manager for his quartette, which, he expects will tour the country after he finishes putting the Yale Glee club into shape. Carpenter explained his departure from the city by saying, "It is no disgrace to run if you are scared."

Policeman Lawler, Detectives Frey and McGrath and Captain Cowles were the state's witnesses.