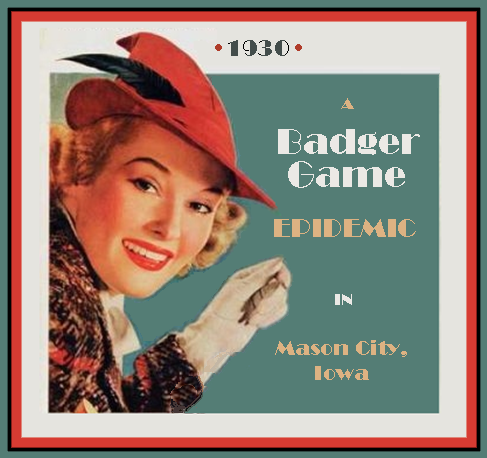 FULL TEXT: That the old “badger game” is being revived to an alarming extent in this community and becoming one of the big problems of law enforcement officers was revealed Saturday by Sheriff C. E. Cress, who stated that he had conducted extensive investigations into extortion operations here.

All of the facilities "of the sheriff's office, he said; will be at the disposal of persons who without cause become victims of extortions, Mr. Cress stated. The "badger game" has made victims of a number of innocent persons in the county, he said, citing one instance of suicide which had the extortion complex.

"During the past 30 days quiet investigations by the sheriff's office have revealed a series of cases of black mail and extortion," said the sheriff. "Practically" every one of the cases show a similarity to the old badger game which has been played in various phases for many years past.

"By way of explanation the badger game, while varying in. many ways is played in the following manner:

"The victim, usually a married man with a family and prominent in the community, is approached by a married woman either in his home or office. The acquaintance prior to this meeting may have been only casual, their having met in the course of business or in some other casual manner. The woman usually has a hard luck story and appeals for a small loan. Generally this loan is refused but realizing the possible financial circumstances of the woman, the man gives, her a five or ten as an account of charity.

"A few days later the woman either calls or telephones explaining that the man is the only friend to whom she can go as she is practically destitute." An appointment is made and usually the victim arrives in his car. The woman hurriedly gets into the car and directs the victim to some by road. She has the same hard luck story, domestic and other troubles. She requests the driver to stop the car and either another car drives up or the husband appears usually with a witness and throws a flash light on the pair and states that the woman is his wife.

"The husband takes his wife from the car and drives away. No violence is offered the victim and he returns home. A few days later the victim receives a letter usually from some attorney stating that the husband is about to sue for alienation of his wife’s affections and requesting that he call at his office and avoid all the publicity attending such a case. The man thinks of his wife and family and not realizing the situation or the character of the conspirators who are usually people of ill repute, either makes settlement or consults his own lawyer with a view to either fighting the case or making as small a settlement as possible.

“In some case the woman seeks a position as maid in a home and when about to be fired usually because of incompetency threatens suit because of an alleged assault by the head of the house. Threat of suit and the ever attending fear of publicity brings about a quick settlement.

“Generally speaking where the victim is innocent of any wrong doing, he need have no fear of suit because it is a bluff from start to finish. A suit at law spoils the conspirator’s plans. While attempting to expose the victim they uncover their own game.

Chapter 587 of the 1927 Iowa Code OB the subject of extortion is as follows:

“If any person, either verbally or by any written or printed communication, maliciously threaten to accuse another of a crime or offense or to do any injury to the person or property of another, with intent to extort any money or pecuniary advantage whatever, or to compel the person so threatened to do any act against his will he shall be imprisoned in the penitentiary not more than five years or be fined not exceeding $1,000 or be imprisoned in the county jail not exceeding one year or both such fine and imprisonment.”

"The sheriff's office is not interested in real cases involving alienations of affections because they are purely civil cases.

"But where the victim is innocent of any wrong doing and has been placed in an embarrassing situation thru being framed, this office will conduct an investigation with a view to procuring evidence to present to the grand jury for an indictment for extortion.