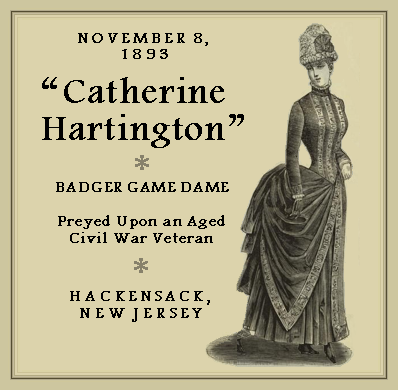 FULL TEXT: Hackensack, N. J., Nov.8. – Paul Hern,79 years old, of Park Ridge,a veteran of the civil war, recently got $1,500 of back pension, and while in a happy mood sent an advertisement for a young wife to a New York matrimonial bureau. He thus became acquainted with "Catherine Hartingdon,” a blonde soubrette, attractive and about 30. She spent three days at Hern's house last week, and then entertained her alleged brother, who came up from New York. The couple worked the badger game to perfection. Hern was accused of winning the affection soft the man's wife, and violence was threatened him unless $1,000 was produced. The stranger threatened to sue for $10,000 damages. Hern raked up $700, all he had. And the couple then made their victim drive them to the Tappan station on the West Shore road. Justice Smith of Park Ridge has issued warrants for the badgers.