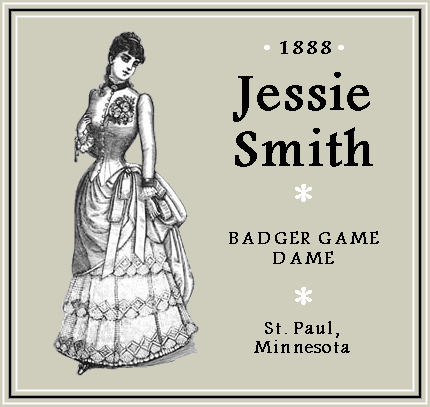 Archaic slang used below – Masher: a man who makes passes at women; Rounder: someone who is frequently drunk or shows immoral or improper conduct.

EXCERPT: Speaking of mashers, let me do a bit of right down criminal reporting, because it pertinently tells how some of our mashers are being made to pay for their folly with dollars and chagrin. I get my facts from Police Inspector Byrnes." The badger game has been revived, "he says." The revivalists were 'Handsome' Harry Ross and Jessie Smith. Harry had been a bunko operator and a green goods swindler. He was noted for his good looks, being a six-footer, with the face of an Adonis and the manners of a polished gentleman. Jessie was an equally pleasant sight in a feminine way, for she was young, and very stylish. These two are supposed to have begun work together not more than three months ago.

THE SCHEME was bold in conception and operation. They would go to a first class hotel and register as husband and wife under some assumed name, and deport themselves in the house with decorous dignity, except that Jesse would, at the first opportunity, begin an apparently sly flirtation with some transient guest. Usually she picked out a Western or Southern merchant on a business visit to the city. Full of ambition for sentimental conquests, and flattered by the covert attention of so comely a young woman, he would lose no time in making her acquaintance. She would angle adroitly, and without much delay would land her fish in her room. There the couple would be “surprised” by the entrance of the pretended husband, whose simulated rage of jealousy scared the dupe half out of his wits. And made him only too glad to buy escape at a price rarely less than $500, and often much more. Certainly four of the Broadway hotels were thus used by Harry and Jessie without suspicion on the part of the landlords. But the success of the venture was learned by one after another of the professional confidence operators, and Inspector Byrnes now admits to your correspondent that a dozen couples have gone into the business. Some of them are far less discriminate in their work, however, and several have dropped to the level of decoying drunken men from the street. That was what drew the attention of newspaper reporters to the subject, for the inebriated victims were sometimes reckless of exposure, and went directly to the police stations with complaints of robberies."

The victims of the badger game most susceptible to ridicule, however, are those rounders of the town who believed themselves proof against traps, but who have been caught by deft and clever appeals to their vanity. Not a few of these chaps, with reputations as mashers, have proved the easiest victims, and the clubs are full of merry gossip about their costly adventures. The police have gone at it with a will, and they promise to speedily clear the city of the revived badger game. Jessie is under arrest and Harry is a fugitive. – Clara Belle