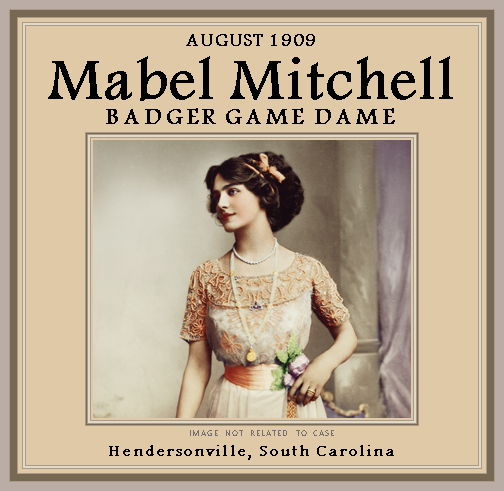 FULL TEXT: Hendersonville, N. C., August 18. – Flourishing a deadly six shooter and wildly excited, Baxter Mitchell, of Hendersonville, broke into a room in the Swannanoa hotel, Asheville, occupied by his wife, Mabel, and a stranger, also of Hendersonville, and demanded a thousand dollars from each of the alleged guilty pair as the price of his silence.

The woman paid him $600 in currency, the man gave him two checks, one for $200, another for $395, and five dollars in currency. The alleged injured husband then left the room, soon followed by the stranger, who could still see the glistening barrel of that big revolver.

Such, in brief, is the story of a "badger game" successfully worked on a visitor in Hendersonville by Baxter Mitchell and his wife, Mabel, who also have been spending the summer here and who have registered at some of the most prominent houses in town.

The stranger immediately left for his home in South Carolina. Returning to Hendersonville yesterday on the one o'clock train, he had two warrants sworn out. One charged Baxter Mitchell with assault with a deadly weapon, the other charged Mitchell and his wife with "unlawfully and wilfully conspiring and agreeing to defraud and extort from said plaintiff certain checks and securities amounting to $595."

As Mitchell and his wife stepped from the five o'clock train from Asheville yesterday evening they were placed under arrest by Sheriff Blackwell and Deputy Otis Powers.

They were immediately taken to ‘Squire Dermid's office. Both parties were represented by counsel, and after a long consultation the case was compromised, the checks returned to the plaintiff and were burned by 'Squire Dermid in his office.

Mitchell was accused by the plaintiff of enticing him to his room in the Swannanoa hotel in Asheville, last Friday night, under pretense of buying some stock. He soon left the room, it is said. Mrs. Mitchell entered and in a few minutes the husband returned waving a pistol in the air and demanding a thousand dollars from each of the alleged guilty pair.

The woman, in tears, gave him $600 in currency. The stranger paid in two checks, dated Saturday, drawn on a South Carolina bank. He immediately left for his hometown, returned here with his attorney yesterday, and Mitchell and his wife were brought to 'Squire Dermid's office, where the above alleged facts were brought to light.

Mrs. Mitchell is an exceedingly striking and beautiful woman. With her husbands he has been in Hendersonville for several weeks, where the same game it is rumored, was tried on another man in one of the hotels here.

The plaintiff in the case, who has been in town for about a month, alleges they followed him to Asheville last Friday, where he had gone on business and Mitchell, meeting him on the street there invited him to his, room on the pretext of talking business.

He had but five dollars on his person when Mitchell broke into the room and demanded a thousand dollars from him. He gave him two checks, dating them Saturday, and five dollars in cash.

At the trial yesterday he withdrew the warrant, the checks were returned and burned and he paid the costs, amounting to $4.75, after which Mr. and Mrs. Mitchell left the courthouse together.