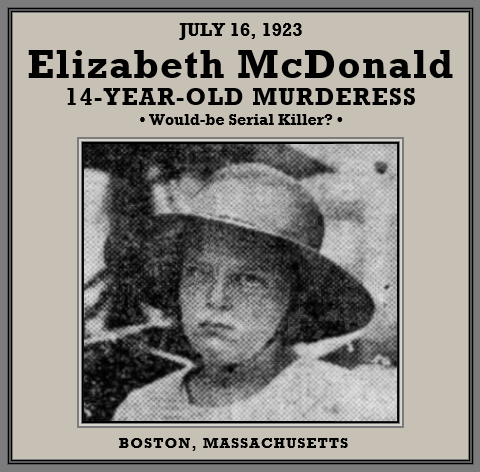 FULL TEXT: After an examination of more than an hour by police officials and juvenile probation officer New F. Hoyt of the Chelsea District Court, 14-year-old Elizabeth McDonald of 2 Shawmut pl., Chelsea, confessed to the killing of little "Sonny" McDonald, aged 4, of 7 Suffolk st., Chelsea, who was drowned in a hole behind the plant of the Texas Oil Company, last Monday evening.

"Sonny," as he was known to all the children of the neighborhood, was James J. McDonald, son of Mr. and Mrs. George McDonald, and was not related to the girl who pushed him into the water.

The boy disappeared about 4:40 p m Monday and at 8:40 the body was found close to the sea wall near the Texas Oil plant on Marginal st., Chelsea, by his father, George McDonald, and by a James Hanlon, who live in the same house. The body was lying in only a foot of water, but the child had been dead for a long time.

Judging from the stories told by the McDonald girl herself and by several other children in the neighborhood, the girl deliberately pushed "Sonny" into the water after he had refused to jump in himself. She had taken several of the smaller children, including Sonny's brother, John McDonald, who is 5 ½ years old, in back of the old Magee foundry, where the Texas Oil plant is now located, aid had led them throwing stones there.

Sonny stopped throwing stones and walked away from his playmates. The little boy appeared to be tired. He went and sat beside the hole, near the piling of the wharf where the water was fairly deep. There were two boards crossed together like an X and nailed on the piles.

'Jump in, sonny," the McDonald girl la alleged to have urged.

“Go ahead," coaxed the girl.

With the remark, according to the stories of at least three children who saw the episode, the McDonald girl put her hands behind sonny's back and pushed him, and he went into the water head first. His head apparently caught in the boards in some manner and his feet were dangling in the. Elizabeth was apparently frightened by what she had done and fled home. Today she told the police that after she pushed the boy into the water she was seized with a pain in her stomach and went home.

When she arrived home she is alleged to have told her younger sister that she would "bet somebody had pushed Sonny overboard." She said: "I think there is going to be trouble around here tonight, and I’m going to Revere Beach.”

Patrolman Thomas J. Quigley, a special officer attached in the inspector's department, made an investigation of the case as a result of an anonymous letter sent to Chief Charles M. Finn of the Chelsea police, in which it was intimated that the McDonald boy did not die from accidental drowning, as everybody believed when the supposed accident was reported.

Quigley, who is a brother of Mayor Quigley, questioned the children of the neighborhood and little by little learned the story. The girl at first denied her guilt, but finally admitted to probation officer Hoyt that she had pushed the boy into the water.

She said that the following day she visited Mrs. James Hanlon, who is a sister of the mother of the drowned boy, Mrs. McDonald, and began to tell her something about the drowning. Mrs. Hanlon, so the girl stated, drove her from the house with a brick owing to a previous episode between the McDonald girl and Betty Hanlon, Mrs. HanIon's daughter.

The girl was taken into custody by the police. Because of her age, she was not formally arrested, but was placed in the care of Juvenile Probation Officer Hoyt. Accompanied by her mother, Mrs. Lyle McDonald, the girl Elizabeth was taken this afternoon by Mr. Hoyt to the headquarters of the Society for the Prevention of Cruelty to Children in Boston. She will be in charge of the society until next Thursday, when she will be arraigned in the Juvenile Session of the Chelsea District Court.

The police say that the McDonald girl is mentally deficient and that several months ago she was examined by City Physician F. A. Mahoney, who said she should be committed to an institution. The mother refused to permit this, it is alleged. Dr Mahoney said her mentality was that of a child of 7 or 8 years.

The mother then took the child to the Children's Hospital, where an examination was made. They said she was mentally defective and advised that the child be put away. The girl, though 14 years old, is only in the fourth grade of the Shurtleff School.

The children who told special officer Quigley that they saw the Mc Donald girl push the little boy into the water are Michael Nadworny, 6 ½ , of 96 Marginal st.; Chester WoJciechowske, 5 ½ , of 36 Suffolk st., and Hampden Cronin, 5, of Essex st.

After the little girl confessed and realized what she had done she broke down and wept bitterly. When she learned that she had to be taken away from her mother the scene that ensued was heartbreaking. Even the calloused police officers were almost moved to tears.

The girl is the oldest of three children and her father, Alvie McDonald, died last Winter. The family came to Chelsea from Newfoundland. 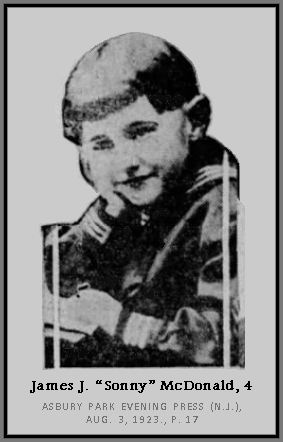 FULL TEXT: Clad in a freshly starched linen frock of spotless white, that bore patent evidence of the fond care of some loving heart, little Elizabeth McDonald of 2 Shawmut pi, Chelsea, who will be 14 years old next month, stood in the judge's lobby in the Chelsea District Court today to answer to the charge of murder.

While the venerable Judge Albert L Bosson, clad in his black judicial sown, sat in judgment, the sweet looking, innocent-appearing little girl listened to the formal charge of murder read by Clerk Joseph M. Cur-ley, alleging that she had willfully caused the death of 4-year-old James J. McDonald of 37 Suffolk st, Chelsea, by drowning.

A person looking on at the scene could find no compatibility between the wholesome appearance of the little girl defendant and the twisted, warped or subnormal mentality behind the clear blue eyes and outward normal appearance of the child. This warped mind, many believe, caused her to perform many acts which she is alleged to have committed, one of which ultimately resulted in the death of one of her little playmates, 4-year-old "Sonny" McDonald.

There was no charge of being a delinquent; the complaint reads just plain murder. Many persons in animated discussions yesterday and today asserted that the girl would have to be charged with being a delinquent, but in capital crimes the charge is murder in case of a killing if the defendant is more than 7 years old.

Judge Bosson held the girl without hail for a hearing in the juvenile session of the Chelsea Court next Thursday, as murder is a nonbailable offense. The girl was committed to the Charles st. Jail, where she will be in the care of Sheriff John A. Keliher will arraigned in court next Thursday.

Although there is no formal evidence of mental deficiency before the court, Judge Bosson apparently thinks that the girl is not of sound mind, and has requested the State Commissioners of Mental Diseases to make an examination of the child. This request will be issued to them formally today by Clerk Curley. They or Sheriff Keliher may have the child examined.

Juvenile probation officer Ned F. Hoyt, in whose custody the child was until her arraignment today, pleaded hard for her to be sent to the Psychopathic Hospital and not to jail, but there was no way under the law in which such procedure could be taken apparently.

~ She Laughs and Jokes ~

The McDonald girl spent last evening at the home of an aunt on Revere st. As an indication of the girl's mental condition and of her failure to realize the seriousness of what she has done and her own plight, she was laughing and joking over the way she had fooled newspaper photographers who sought to take her picture, by putting her bands over her eyes.

The girl is alleged to have pushed the little McDonald boy into a hole in the wharf of the Texas Oil Company on Marginal st. last Monday afternoon, and to have run away and left him with his head under water and his feet in the air.

She is alleged to have pushed four other children into the water at different times and at one time to have attacked her mother, Mrs. Lyle Louise McDonald, so that the latter was almost in a semiconscious condition.

As the little girl left the judge's office in care of the police matron, Mrs. Winifred Hynd, one of the police officers was heard to remark, under his breath: "God help her."

And these were the sentiments of every one present, without any doubt. 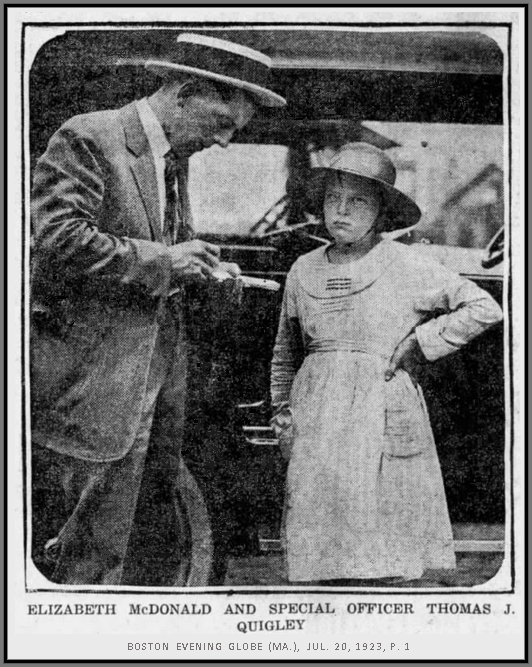 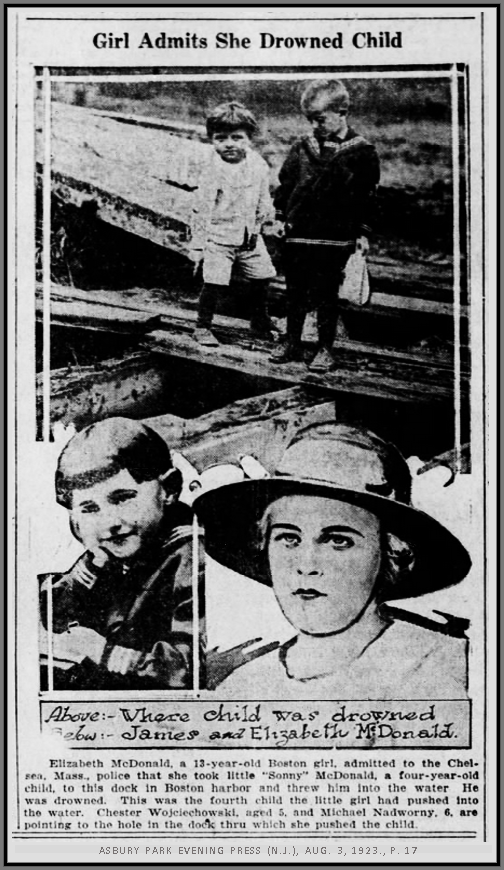 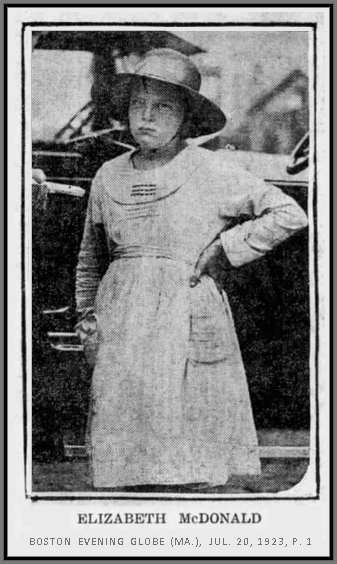 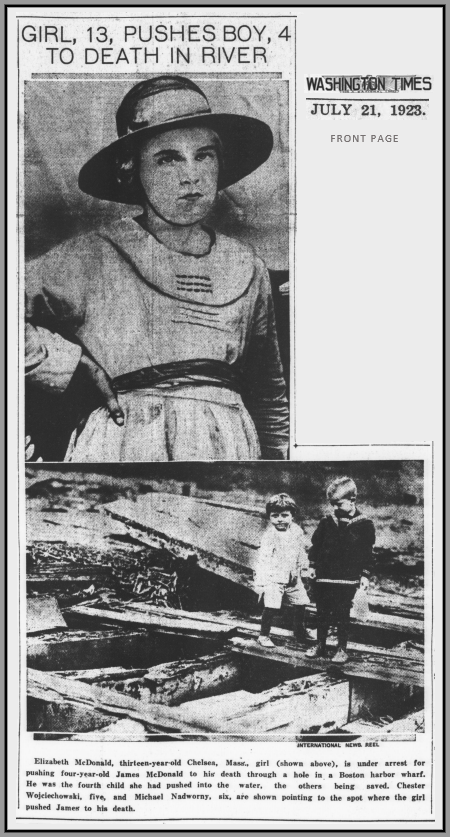