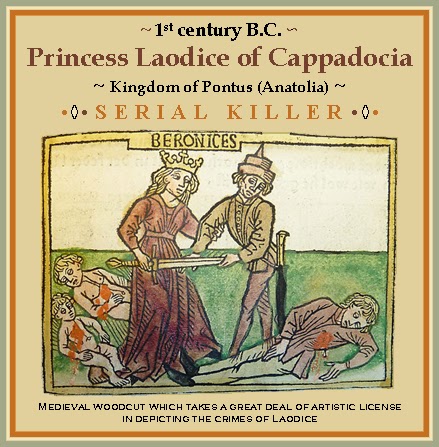 Laodice of Cappadocia, flourished second half of 2nd century BC and first half of 1st century BC) was a Princess from the Kingdom of Pontus.

After Aristonicus was taken prisoner, the people of Massilia sent ambassadors to Rome to intercede for the Phocaeans their friends, whose city and even name the senate had ordered to be destroyed, because, both at that time, and previously in the war against Antiochus, they had taken up arms against the Roman people. The embassy obtained from the senate a pardon for them. Rewards were then bestowed on the princes who had given aid against Aristonicus; to Mithridates of Pontus was allotted Greater Phrygia; to the sons of Ariarathes, king of Cappadocia, who had fallen in that war, were assigned Lycaonia and Cilicia; and the Roman people were more faithful to the sons of their ally, than their mother was to her children, since by the one the kingdom of the young princes was increased, by the other they were deprived of life.


For Laodice, out of six children, all boys, whom she had by king Ariarathes (fearing that, when some of them were grown up, she would not long enjoy the administration of the kingdom), killed five by poison; but the care of their relatives rescued from the barbarous hands of their mother one infant, who, after the death of Laodice (for the people killed her for her cruelty), became sole king.