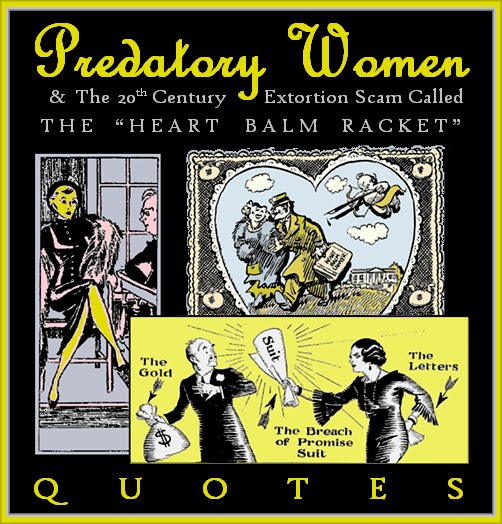 The “Heart Balm Racket” is what the wide-spread and highly remunerative misandric practice came to be called. It is was the extortion scam practiced by predatory women who would, under false pretenses charm a well-heeled man and coax a man to give her written marriage proposals – written, so they could be used later in court, and in a minimum quantity of three, to satisfy evidentiary requirements – and then, after she had gotten her valuable court-ready documentation would then use all her art to make herself so unattractive a prospective wife that her suitor would retract the offer. They called these women “gold diggers”; the grounds of their law suits was termed “Breach of Promise.” These women were, in essence, highly sophisticated and dishonest-to-the-bone, blackmailers.

Nowadays, the practice of allowing predatory women to be remunerated – or given other advantages, such as lighter prison sentences – for falsely representing themselves as victims when in fact such women are cunning sociopathic con artists, is again institutionalized and legalized under the guise of feminism (cultural Marxism). It is instructive for us to look at, and learn from, past examples of scams run by predators of the “victimized sex” such as the Heart Balm Racket, the Badger Game, the Alimony Racket, the military Allotment Racket, and, finally, the worst of the worst, the “Black Widow” serial killing, women who married men and then murdered them, frequently for insurance pay-offs.

**
QUOTES – from historical articles included in The Unknown History of MISANDRY:

JUDGING by the falling marriage rate in the United States, American women seem less interested in wedlock than the women of European countries; yet no others complain so loudly nor so publicly when their hopes of wedded happiness are thwarted, and no others demand – nor receive – such expensive poultices for injuries to their pride, affections and expectations of comfortable support. …
The judgments rendered and the amounts awarded in this Land of the Free for breach of promise, alimony and alienation of affections are the wonder and amusement of Europeans, and are not equaled in any other country. When a woman is bereft of the love of an American man, she has, in the opinion of his peers, lost something of almost incalculable value, and great should be her compensation. – Mary Day Winn 1930 (source)

***
Breach of promise suits largely degenerate into extortion suits against unwitting, unsuspecting and wealthy males.
Many students of social welfare and relations believe present laws are archaic and nothing more than weapons to enforce revenge, retaliation or collect a nice stipend for the enjoyment of life. That the racketeering should be stopped is the belief of many lawmakers and, with Indiana leading the way, Illinois, New York and Pennsylvania Legislatures may soon be considering revisions of their statutes that will take heart balm off the gold basis. – John L. Coontz – 1935 (source)

***
Wretches who moan that love is fickle
-- Here is the point about these squaws –
None of them ought to get a nickel!
Curb this Cupid-ity! pass some laws!

***
Thousands and thousands of dollars are being taken by unscrupulous packleg lawyers in such cases and it’s up to us to give a woman a chance to see how it will work. It is a start in the right direction and it will overcome the filchers.”
Senator Leo N. Smith of Indianapolis asserted that 999 out of 1,000 breach of promise and alienation of affection suits were nothing but “shakedowns.”
Let’s eliminate this evil from the good old state of Indiana,” he thundered.”-- 1935 (source)

***
In that period from the “Gay Nineties” until the beginning of the depression in 1929, the United Slates courts witnessed a miniature “Thirty Years War” of their own. It was no bloody strife over religious or economic issues, but the prolonged battle of the breach of promise suit. – Theodor Apstein 1935 (source)

The Art of Predatory Femininity, for Fun and Profit – 1930

Predatory Women Cut Off at the Pass (Heart Balm Racket) -1935