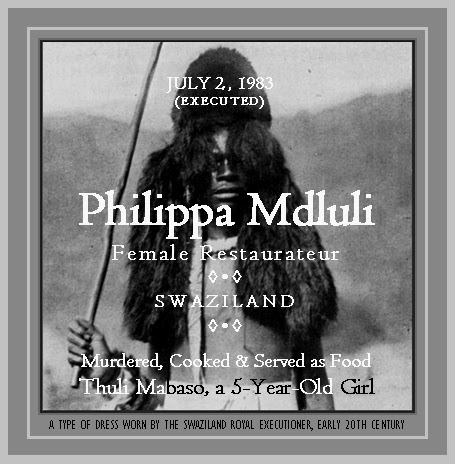 Philippa Mdluli, a 48-year-old restaurant owner in Swaziland was hanged on July 2nd, 1983 for the crime of murder. She had convinced one of her employees to provide a subject for a ritual of human sacrifice. The man offered up his 5-year-old daughter, Thuli Mabaso. Philippa Mdluli accepted the gift, slaughtered the child, chopped up her body and prepared the pieces for the delectation of her customers that were eager to eat the flesh of the girl.

Also, see a case in Nigeria from 2014: Police arrested 11 people and closed a restaurant after two human heads wrapped in cellophane were discovered at a hotel restaurant that had been serving human flesh. A tip-off led police to the macabre discovery in Anambra, Nigeria, with 11 people being arrested and AK-47 guns and other weapons being seized. Human flesh was apparently being sold as an expensive treat at the restaurant, with authorities saying that roasted human head was even on the menu. [Christopher Hooton, “Cannibal restaurant with roasted human heads on the menu' shut down by police,” The Independent (London), Feb. 12, 2014]